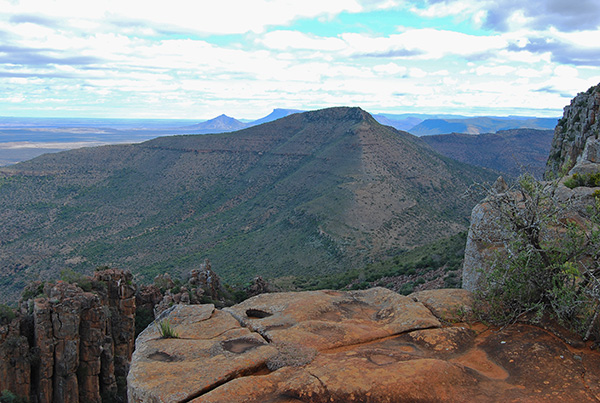 Aberdeen is dwarfed by the vast Plains of the Camdeboo stretching from the mountainous escarpment to the north across an infinity of open space to the south. Although the town stands in the midst of these vast plains the northern horizon is framed by the jagged rim of the Camdeboo Mountains under the vast indigo dome of the Karoo sky.

Bypassed by the N9 highway linking Graaff-Reinet and Willowmore, the town stands at an important junction west along the R61 towards Beaufort West. A gravel road leads south-west from Aberdeen across the Aberdeen Flats towards the railhead at Aberdeen Road and beyond to Klipplaat and Jansenville.

Aberdeen is a surprise to travellers boasting a well preserved architectural heritage with a spectacular array of Georgian, Victorian, Edwardian, Art Nouveau, Gothic Revival and Flemish Revival styles cheek by jowl with the typical Karoo style cottages interspersed throughout the town. 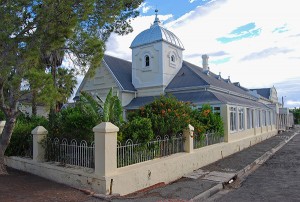 One of many fine Victorian era residences in Aberdeen 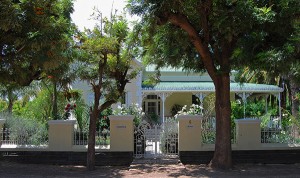 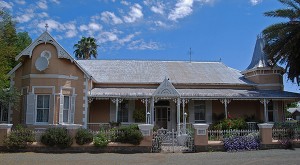 The influx of many people escaping the hustle and bustle of city life have breathed new life into Aberdeen with many of the old buildings lovingly restored to their former glory, providing a peaceful and un-hurried lifestyle to residents which can only be found in out of the way country towns. Some fine examples of Ostrich Baron Residences complete with turrets and decked out in ornate broekie lace ornamentation survive in Aberdeen mostly built around the end of the nineteenth century and the first few years of the twentieth century. 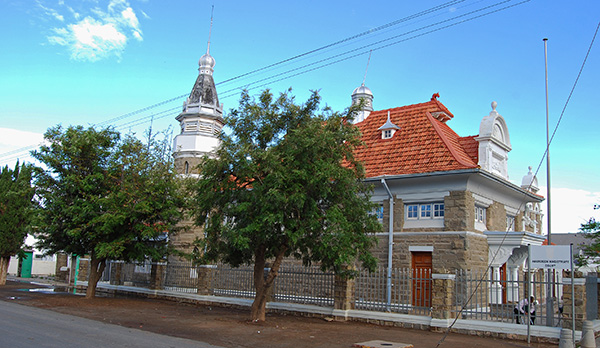 A leisurely stroll through the town’s quiet streets will reveal some of this magnificent architectural heritage.

The Magistrates Court and Post Office are situated in a single building constructed in 1898 from sandstone in the Art Nouveau style. It is believed that the building was built in Aberdeen in error as it was intended as the magistrate’s court in Grahamstown. To add insult to injury the confused builders were not paid for their work.

Some of the best preserved Victorian era residences in the Karoo can be experienced in Aberdeen some of which are guest houses or private residences. Carmen Villa, Pagel House, Villeria, De Denne and Greenfield House are some of the finest examples. 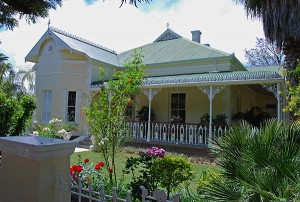 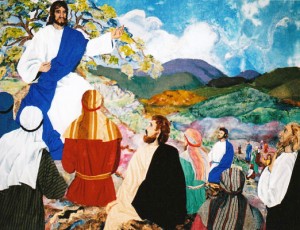 The Sermon on the Mount Panel

The Dutch Reformed Church dominates the central square in Aberdeen and indeed the entire town. The church boasts an impressive steeple that is visible from many miles distant. The steeple is thought to be the tallest in the country at a little over fifty metres in height. Constructed in Cape Gothic style the church was completed in 1907.

Approaching Aberdeen from Graaff-Reinet the steeple appears to lean slightly to the left and this can be ascribed to the weight of the roof tiles added onto the wooden framework.

At the western entrance to the church there are two olive trees. The shorter of the two was grown from a cutting taken from the Garden of Gethsemane outside Jerusalem. 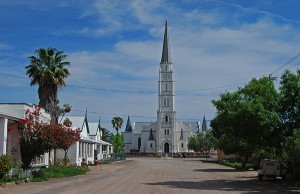 The church uniquely features twenty panels depicting biblical scenes which were conceptualised to improve the acoustics in the church hall.

Five ladies and a young man from Aberdeen handled the artworks and together with many local helpers they completed the task in a mere four months. The panels were created by combining lamb’s wool and various textiles including a variety of old pyjamas donated by the community of Aberdeen that were pasted onto a background of hessian. A unique home-made glue comprising course salt, flour and water was used to stick the textiles and other materials onto the hessian backings. The panels were inaugurated at the midnight service on 31 December 1999. 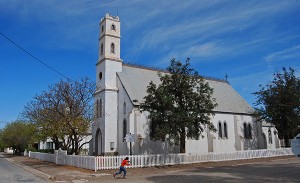 The Methodist church, on the corner of Grey and Brand Street is the oldest church in Aberdeen. The foundation stone was laid in 1882 and the church was consecrated at the end of 1883. In stark contrast with the imposing Dutch Reformed Church, the Methodist Church is a simple stone rectangular building, with Gothic buttresses and arched windows. The bell tower is topped with a belfry of cast iron lace-work. 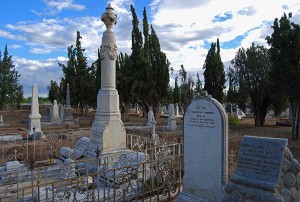 Aberdeen’s well preserved cemetery provides a window on the town’s past from the early nineteenth century to the present day. A stroll through the cemetery tells the story of the town from its early settler beginnings, through the tumultuous days of the 2nd Anglo Boer War, which had a profound impact on the residents of Aberdeen, through the difficult days of the Great Depression of the 1930s up until the present day. 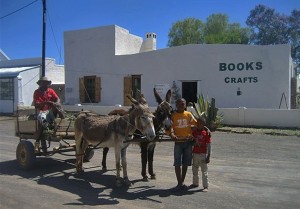 The adjacent Jewish cemetery contains the graves of 20 Jewish men and women who died in the town between 1903 and 1941. This community has since vanished from Aberdeen. 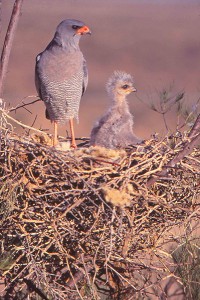 The Pale Chanting Goshawk is
a common Karoo Raptor

Aberdeen has an invigorating and healthy climate, an unpolluted environment, the atmosphere of a quiet and restful country town and at night some of the most spectacular views of the southern skies with the great splash of the Milky Way providing soft illumination across the surrounding Plain. The surrounding district is renowned for its mohair and wool production falling within one of the largest mohair producing regions in South Africa. 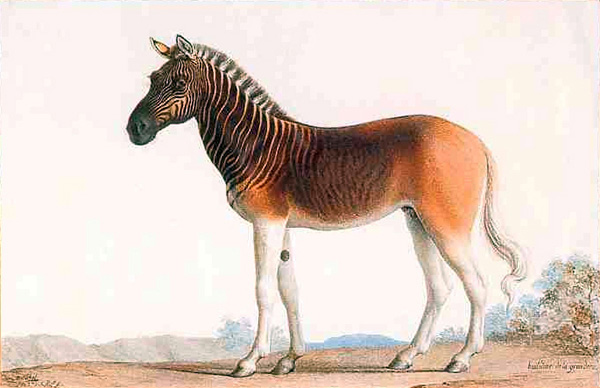 The extinct Quagga was once a common sight in the Karoo

Just across the N9 highway from Aberdeen the 1500-hectare Fonteinbos Nature Reserve situated along the banks of the seasonal Kraai or Crow River is home to a variety of wildlife and birdlife at home in the Karoo. Mammal species include kudu, steenbok, ostrich, springbok and vervet monkey. The reserve is vital to the survival of Aberdeen as it contains a perennial spring known locally at “Die Oog” or the Eye which supplies drinking water to the town together with irrigation for surrounding agricultural activity.

Fossilised dinosaur tracks can also be seen imprinted in the sedimentary rock formations within the reserve. A variety of walking trails and a twenty kilometre circular drive within the reserve are available to visitors. According to local folklore the last wild quagga, a sub-species of the zebra, was seen in the Aberdeen area.