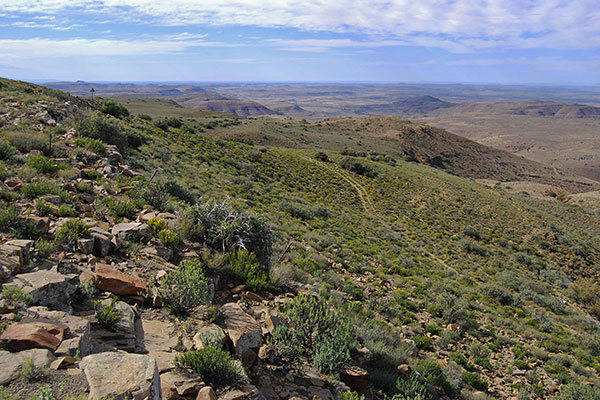 From the Summit of the Rooiberg Pass you can see forever

A little known yet magnificent circular drive linking Laingsburg, Sutherland and Merweville encompasses the Rooiberg and Komsberg Passes. This route will involve a full day’s travel and will reward with magnificent scenery. Crossing the Buffels River towards Matjiesfontein in Laingsburg, turn north into the Moordenaars Karoo or Murderer’s Karoo, so named for the bloody conflict between the early settlers and the San or Bushmen who inhabited the area.

The road from Laingsburg via the Komsberg Pass leads up onto the Roggeveld Escarpment which meets the R354 just above the Verlatekloof Pass or Forsaken Gorge, linking Sutherland and Matjiesfontein, approximately ten kilometres south of Sutherland. The return route to Laingsburg commences about nine kilometres south of Sutherland on the R354, turning east onto a gravel road towards Merweville. 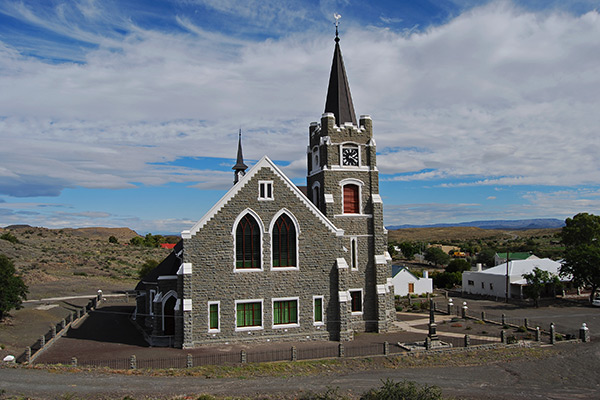 Before reaching the edge of the escarpment an extinct volcano, Salpeterkop at 1,766-metres, looms to the north of the road which was believed to be active more than 60-million years ago.

The road continues across the flat and almost featureless Roggeveld Plateau before a superb vista of mountains and long views across the Koup district of the Great Karoo to the distant Swartberg or Black Mountains is revealed. Descend the little-known Rooiberg Pass which boasts magnificent views along the rim of the Besemgoedberg and out onto the undulating plains of the Koup to Merweville. 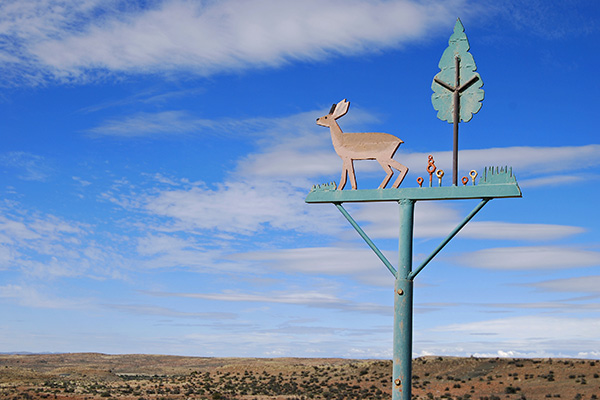 Steenbok signage on the Merweville to Koup Station Road

From Merweville, a gravel road leads south-west towards the foothills of the Komsberg terminating on the N1 highway at Koup Station. From here it is a short run back into Laingsburg along the N1 highway.

Be prepared for fairly rough road conditions, particularly on the mountain passes, together with the opening and closing of numerous farm gates. You will however be rewarded with some of the most spectacular mountain scenery and the very special tranquillity of the Karoo. 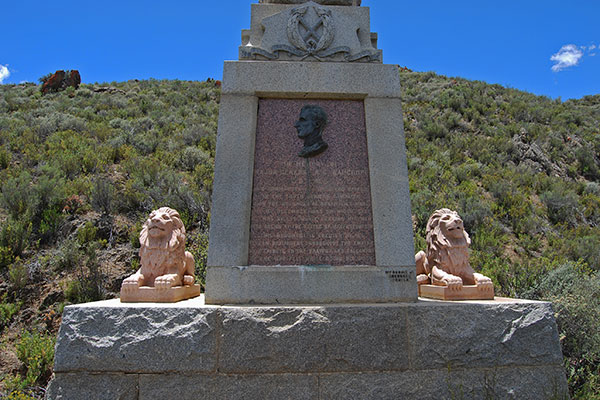 Approximately ten kilometres from Matjiesfontein an un-signposted track leads off the N1 highway to the historic Monument graveyard.

The graveyard is easily visible from the road as a memorial spire stands on the hillside above the graveyard commemorating the life of Major-General Andrew Wauchope, who was killed at the battle of Magersfontein during the Anglo Boer War. The graveyard also contains the remains of James Douglas Logan, the founder of Matjiesfontein and his wife Emma Pauline Logan. 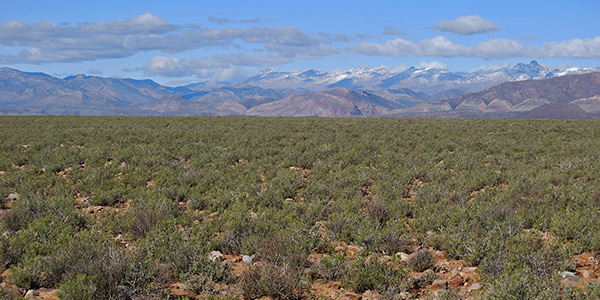 View of the Swartberg Mountains from the Witteberge Road

Continue along the N1 highway towards Touwsrivier passing Logan’s Tweedside farm before turning south onto a gravel road - signposted Witteberge. The gravel road heads south and passes through a narrow defile into a long valley sandwiched between the Witteberge to the north and a rugged mountain landscape to the south.

This road affords travellers some of the most beautiful scenery in the western Koup and is seldom travelled and therefore it is likely that you will not be disturbed by any other passing traffic as you journey east along the floor of the valley. 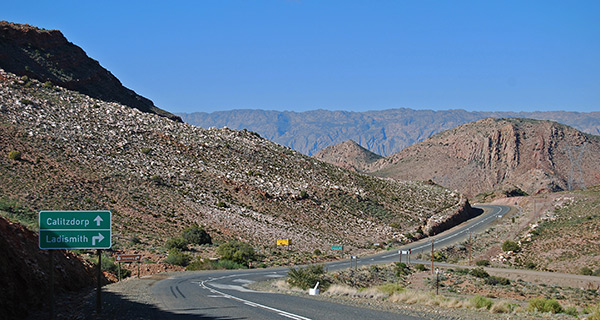 The Rooinek Pass leads down into the narrow Vleiland Valley

The road passes a number of isolated farms before climbing out of the valley, from where a spectacular view of the Swartberg or Black Mountains further to the east is revealed. The road eventually terminates on the road linking Laingsburg with Ladismith and Calitzdorp. From this junction it is a short drive back into Laingsburg following the course of the Buffels River.

The road south from Laingsburg leading through the Seweweekspoort into the Klein Karoo returning to Laingsburg via Ladismith and the valley between the Matjiesgoedberge and the western end of the Klein Swartberge is probably one of the most spectacular driving experiences in the Karoo. 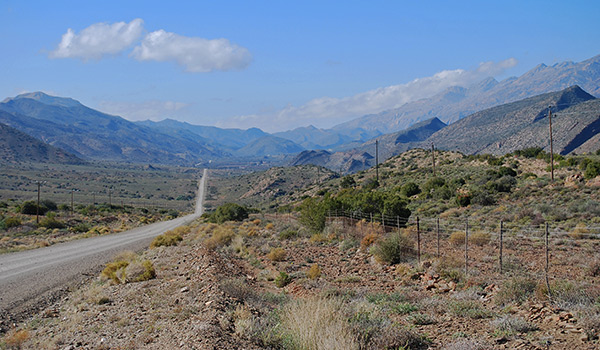 Crossing under the railway line, the road leads past the junction to the Witteberge Road and further on the turnoff to the Floriskraal Dam. The road then ascends the gentle Rooinek Mountain Pass before plunging into the narrow valley that runs east between the high peaks of the Klein Swartberg, or Small Black Mountains, to the south and the Elandsberg to the north.

As one descends into the valley the road reaches the turnoff to Ladismith via the western loop road linking to the Anysberg Nature Reserve and beyond to the distant Klein Karoo town of Montagu. The road continues along the narrow valley eventually becoming a gravel road as the road reaches the floor of the valley. 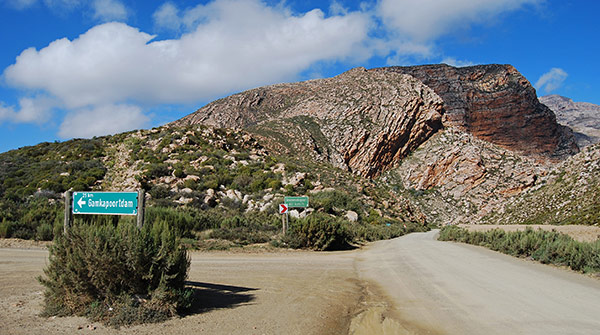 Few travellers pass this way and one can take the time to savour the spectacular vistas of valley and mountains seemingly stretching to infinity.

The road passes a number of isolated farms and skirts close to the northern slopes of the Klein Swartberg Mountains before reaching the junction leading through Seweweekspoort into the Klein Karoo and the road leading down the Bosluiskloof or Tick Kloof to the western shores of the Gamkapoort Dam, where the road terminates. Before the construction of the dam in 1968 the road continued eastwards over the Dwyka River to Prince Albert.

From the junction leading down the Bosluiskloof the road enters Seweweekspoort, or Seven Weeks Defile, which follows the course of the Huis River, or House River, through the rugged Swartberg Mountains. Local residents on both sides of the Swartberg Mountains had been agitating for the construction of a pass through the mountains since 1845. 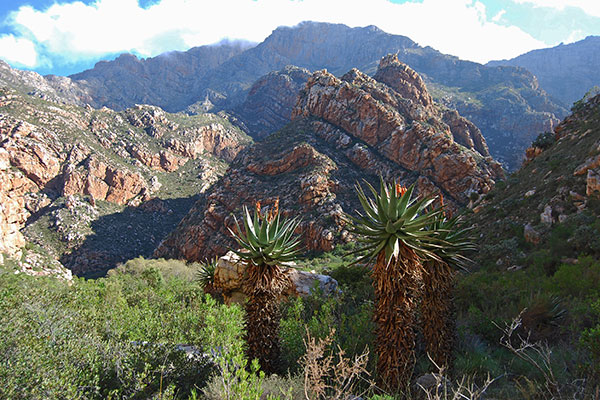 Construction on the pass began in 1859 utilising convict labour. However the project was bedevilled by inadequate funding resulting in a sub-standard road that often flooded, blocking any movement through the mountains. By 1862 the road was sufficiently completed to allow the passage of wagons and riders and a journey of six days was reduced to a mere three hours. 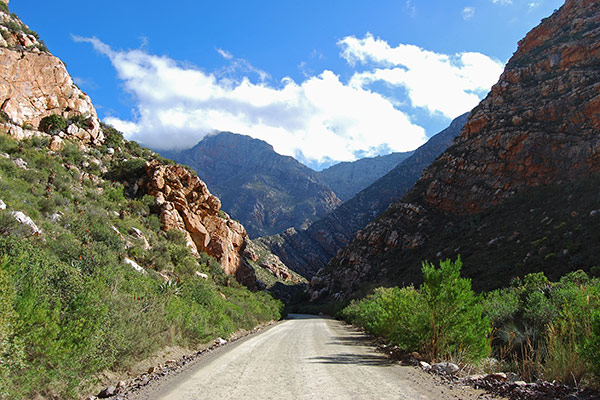 The road is little changed from these early days with the addition of a number of concrete bridges that criss-cross the river as you progress through the kloof. The road winds itself between high, twisted ramparts of rock with the surrounding peaks crowding above. The best way to experience the pass is to travel on the back of an open vehicle to fully appreciate the sheer mountain slopes and rugged terrain that crowds right down to the edge of the road. In the winter months the mountain peaks are often capped with a mantle of snow and the narrow valley is rich with the colour of flowering aloes. 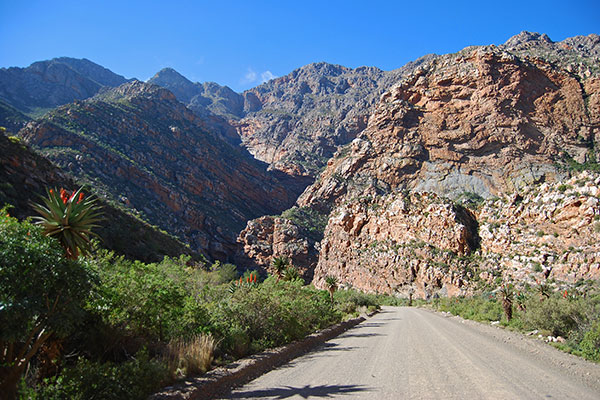 Approaching the Southern End of Seweweekspoort

As one approaches the southern end of Seweweekspoort the mountains recede and the road emerges into a broad valley terminating on the R62 at the small village of Amalienstein.

The road to the east leads through the Huisrivier Pass, or House River Pass, to Calitzdorp and beyond to Oudtshoorn, the principle town of the Klein Karoo. 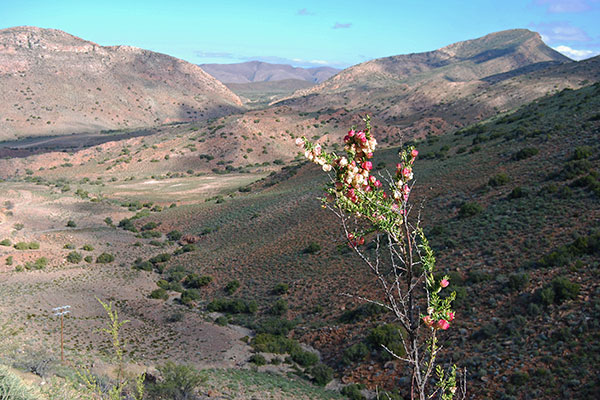 Flowering Klapperbos on the road between Ladismith and Laingsburg

To complete the loop to Laingsburg turn towards Ladismith along the R62. At Ladismith the road to Laingsburg branches off the R62 leading through the town and out into the fertile valley skirting the southern slopes of the Klein Swartberg Mountains.

Approximately 34-kilometres from Ladismith the road reaches a junction leading through the western Klein Karoo to Montagu.

The right hand fork leads around the western end of the Klein Swartberg Mountains returning to Laingsburg via the Rooinek Mountain Pass.

A full day’s travel is required to enjoy this magnificent circular drive linking the Great Karoo and Klein Karoo.

If you leave early you will have time to travel down Bosluiskloof to the Gamkapoort Dam before returning to travel through Seweweekspoort and on to Ladismith, returning to Laingsburg at the end of an exhilarating day of exploration.