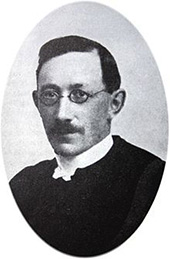 Carnarvon has its origins as a Rhenish Mission station dating back to the 1840s. One of the first Rhenish Mission Stations was established at Schietfontein (Skietfontein) to service the spiritual needs of the Basters who had established themselves in the district since the early 1800s.

This first mission station was established by the Reverend Christian Wilhelm Alheit, who was born in 1817 in Thuringen, Germany. The mission station at Schietfontein was situated in close proximity to the mission station at Harmsfontein where a number of Xhosa families had settled in terms of land granted to the community in 1839 by the Governor of the Cape Colony, Sir George Thomas Napier. 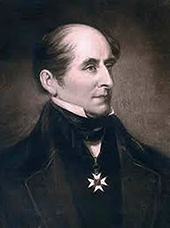 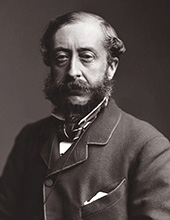 The far-flung frontiers of the ill-defined Cape Colony were a haven for many desperados and fugitives from justice in Cape Town. The Carnarvon district during the late 1700s and early 1800s sheltered a number of these fugitives in the wild open lands of the north-east frontier of the Colony. One of the more interesting fugitives was an antecedent of President Paul Kruger of the Zuid-Afrikaanse Republiek, by the name of Carel Krieger, who was in fact a Kruger.

In 1776 Carel was appointed "Veldwachtmeester" a sort of District Commissioner of the Klein Roggeveld, where he was expected to make repairs to the rudimentary network of roads and to organise defence activities against the marauding San or Bushmen. Carel and his brother Jacob, who possessed extraordinary mechanical skills, carved two wooden dies for stamping or printing Rixdollar notes closely resembling those issued at the time by the Dutch East India Company. 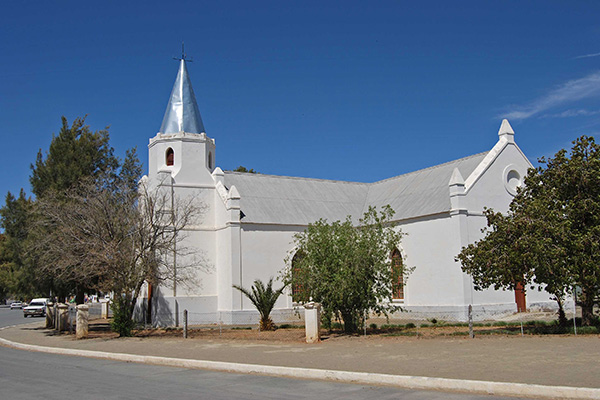 The Uniting Reformed Church in Unieplein was built in 1858

Jacob was arrested in Cape Town after spending some of these forgeries on guns, knives, ploughs, sail-cloth and buckskin trousers. He escaped and orders were issued for the brothers' arrest.

The two brothers fled into the remote north-east frontier region of the Colony, Carel taking his wife and family with him. They were tried in abstentia and found guilty. Carel was sentenced to death by hanging and his brother as an accessory to the crime was sentenced to a beating and branding on the gallows, to be followed by fifteen years imprisonment.

The brothers found a safe haven in the wild country along the banks of the Orange or Gariep River. They used their precious store of gunpowder and shot sparingly, always cutting out the bullets from the animals they shot and remoulding them for use time and time again. Carel was trampled to death by an elephant, which he had shot and wounded, near the Kareeberge in the Carnarvon district in 1791. 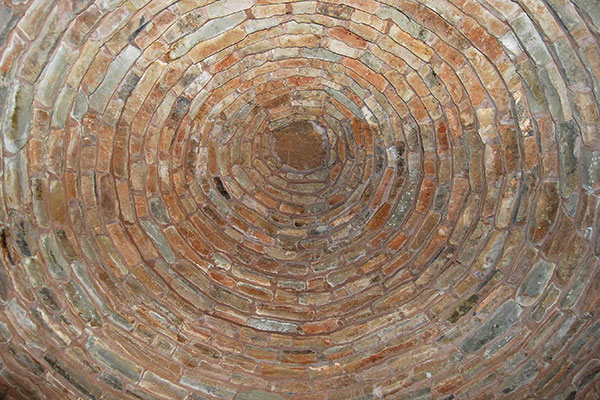 It was likely, according to the account of the incident related in Lawrence Green's book, Karoo, that other fugitives such as his brother Jacob, Jan Meyer and Anthony Botes were in the vicinity when Carel was trampled to death. Jan Meyer had been serving a sentence on Robben Island, near Cape Town, when he made a crude boat, sailed to the mainland and escaped into the interior to join up with the Kruger brothers.

After the second occupation of the Cape Colony by the British in 1806, Jacob was offered an amnesty and was allowed to return legally to the Colony. It is believed, although not confirmed, that Jacob died in the Kalahari Desert after being attacked by a lion.

Unfortunately the Kruger brothers did not keep any written account of their wanderings in the wild frontier lands of the north-eastern Cape Colony and the lands beyond the Gariep River between 1783 and 1805 and consequently little is known of their adventures as some of the first European travellers in the vast interior of South Africa.

Jacob was described as a man who "spoke little and laughed seldom, knew no fear. His deep-set eyes, long grey hair and great beard lent him a threatening appearance. He carried a short thick elephant gun carrying bullets weighing a quarter of a pound."

Following the issuing of a geologists report in 1907, reporting the presence of a vast lake of oil beneath the surface of the Upper Karoo, considerable effort was made to strike oil and to transform Carnarvon into a thriving crude oil production centre.

One of the boreholes on the farm Dubbeldevlei, was sunk to a depth of five thousand feet; however, all that was excavated was dust and more dust.

It was said at the time that the most oil discovered in the region was the grease used to keep the drilling equipment functional in the dry and dusty conditions.

After repeated attempts to strike it rich the search for oil was abandoned in 1921.