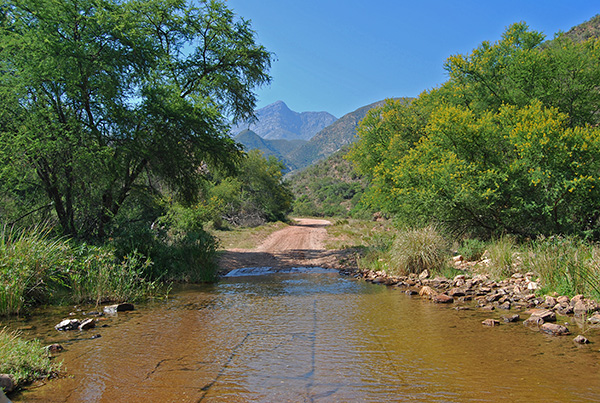 Willowmore is the western gateway to the Baviaanskloof Wilderness Area, a World Heritage Site, and one of the most biodiverse areas in South Africa. The Baviaanskloof Nature Reserve is the third largest protected area in South Africa. Its rugged and ever-changing topography contains sub-tropical thickets, mountain fynbos and typical Karoo vegetation, including a rich variety of succulent plants. 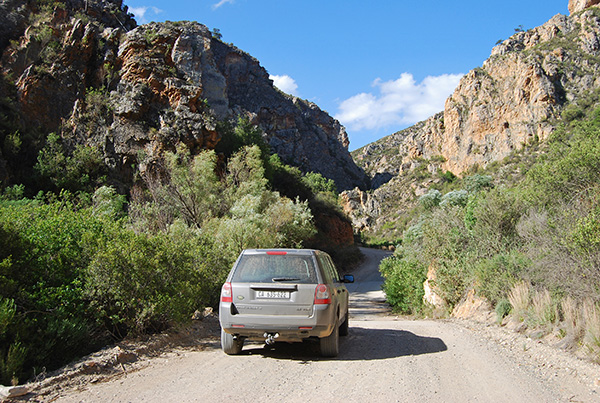 The Baviaanskloof nestles between the rugged ramparts of the Baviaanskloof Mountains to the north and the Kouga Mountains to the south. Clear mountain streams dissect the rugged mountain landscapes and some of the larger rivers of the western part of the Eastern Cape such as the Kouga and Gamtoos River find their tortuous way through the jumble of hills and mountains.

Travel south along the N9 highway towards Uniondale. The gravel Baviaanskloof road branches off towards the south-east a few kilometres south of Willowmore. As the road approaches the lip of the Baviaanskloof Valley it reaches a gravel turnoff to the west towards Oudtshoorn and Uniondale.

Continuing past this junction the road descends the Nuwekloof Pass, passing between sheer cliffs of reddish rock streaked with orange and yellow lichen. 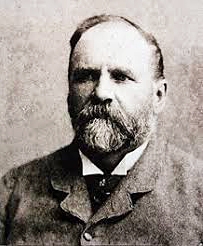 The road was another of the masterpieces of that prodigious Victorian-era road engineer, Thomas Bain, and was constructed between 1880 and 1890. Together with his father, Andrew Geddes Bain, who emigrated from Scotland in 1816, he was responsible for 32 of some of the most prominent road projects in the Cape Colony. 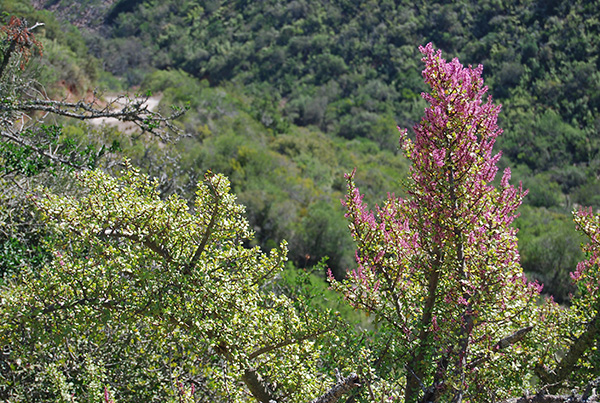 Baviaanskloof was one of the last roads built by Thomas Bain, as he died in 1893, and it is by far the longest and possibly one of the wildest of the roads and mountain passes that he was responsible for building.

From the Nuwekloof Pass the road finds its way along the floor of the valley following the course of the Baviaanskloof River. The road provides splendid views of the mountains fringing the southern and northern rim of the valley.

Sandvlakte, to the east of Studtis, is the last privately owned farm before the road enters the wilderness area of the 270,000-hectare Baviaanskloof Nature Reserve. The road closely follows the course of the Baviaanskloof River passing the picnic site at Miskraal, dominated to the north by the 1626-metre Scholtzberg mountain peak, before traversing the Ysternekkloof, or Iron Neck Kloof, as it approaches the western end of the Grasnek Mountain Pass. 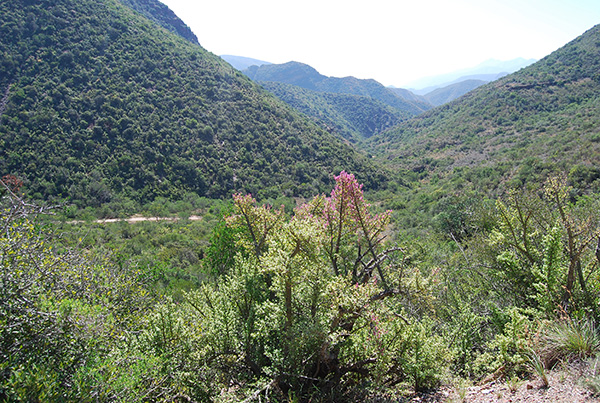 The road begins the western ascent of the Grass Neck Mountain Pass with many twists and turns before reaching the summit and affording the traveller with some splendid northerly views of the Baviaanskloof Mountains. Travelling further towards the east the road descends from the heights of the Grasnek Pass providing sweeping views of the Kouga Mountains crowding the valley bushveld of the Kouga-Baviaans River flood plain. At the eastern end of the Grassneck Mountain Pass, nestled between the precipitous rock face and riverine vegetation at Doornkraal, is a natural plunge pool, another great spot to take a cooling swim. 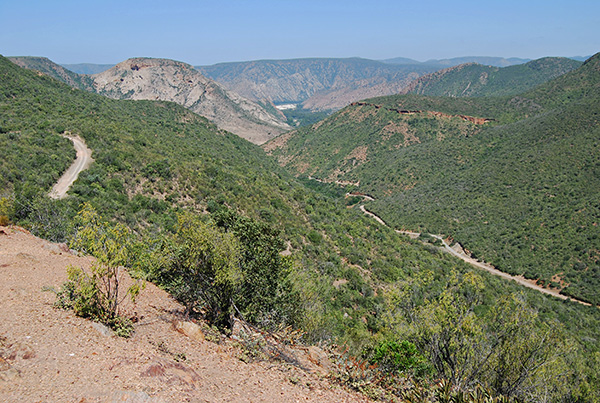 The road twists and turns through the rugged Baviaanskloof

This secluded area between the Grass Neck and Holgat Mountain Passes offers fantastic opportunities for hiking and is an important trail-head for the surrounding wilderness areas.

The Kouga River canyon can also be explored from here which eventually exits at the Riverside Development Area in the Langkloof to the south. The road crosses the Baviaanskloof River at the Smitskraal picnic site just upstream of its confluence with the Kouga River before climbing steadily towards the turnoff to the Rooihoek camping site on the banks of the Kouga River. 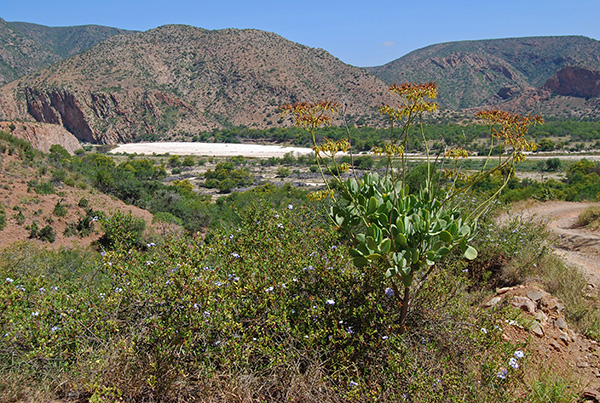 The road dips down to the Baviaanskloof River

The road continues for a short distance to the Doodsklip Camping Site on the headwaters of the Kouga Dam. Originally known as Lemoentuin, or Orange Grove, legend has it that certain individuals died under unusual circumstances at the site, hence the present-day name.

This area was extensively farmed up until 1970. The great flood of 1971 and the expropriation of the land in the area by the state for the construction of the dam, put an end to active farming in the area. 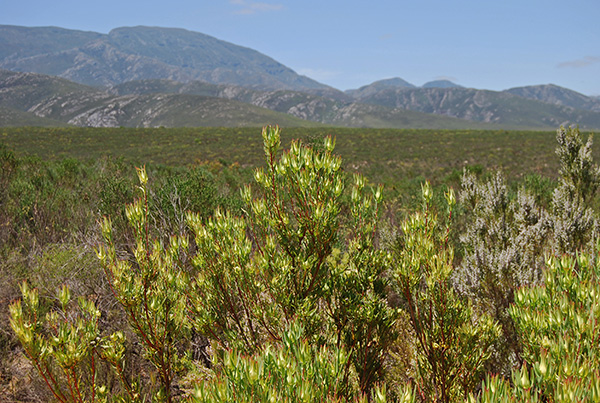 From the Doodsklip Camping Site the road begins the ascent of the Holgat Mountain Pass with a view to the north-west of the 433-metre high conical Langkop hill and the 547-metre high Brandkop to the south-east.

The road finds its way into a steep valley towards the east before doubling back on itself with the steep ascent of the mountain slope festooned with a variety of aloes, mountain fynbos, spekboom thickets and valley bushveld. 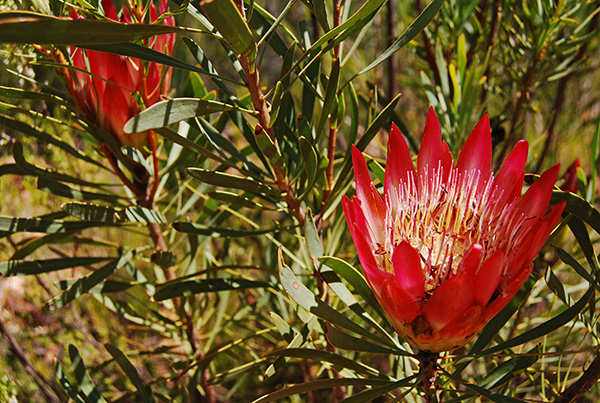 Proteas flowering on the Bergplaas Plateau

The road makes its way onto the summit, at about 560-metres above sea level, turning sharply back towards the east.

The road passes the remains of Winston le Roux's cable way system that once bridged the gaping Waterpoort, providing an effective link between the isolated Enkeldoorn and Bergplaas farming communities. Constructed in the early 1960's, the cable way was used to transport farm produce, including livestock, wheat, potatoes and vegetables, between the two farming areas, thereby by-passing the tortuous and time consuming road route. 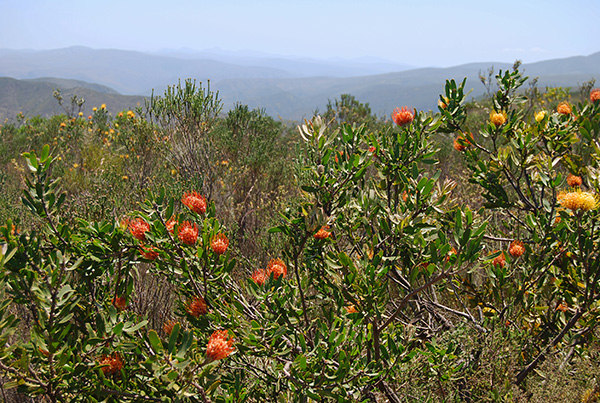 Pincushions flowering on the Bergplaas Plateau

The Bergplaas plateau stretching towards the east from the summit of the Holgat Mountain Pass encompasses an extensive area of grasslands and mountain fynbos and the traveller can often see the rare and endangered Cape Mountain Zebra grazing out on the open plateau.

Panoramic views in all directions encompass rugged mountain ranges and steep valleys carved out by a multitude of mountain streams. The plateau serves as a staging point for hiking trails into the Bergplaas wilderness area. 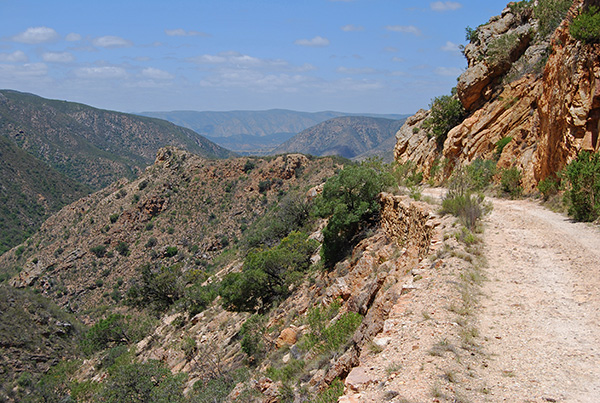 Combrink’s Pass with easterly views across the Baviaanskloof

The road veers south-east before the steep descent down the Combrinck Mountain Pass revealing spectacular vistas of rugged mountains and thickly vegetated valleys stretching towards the eastern horizon. The road traverses the forested Poortjies Valley and the Witrivier, or White River. 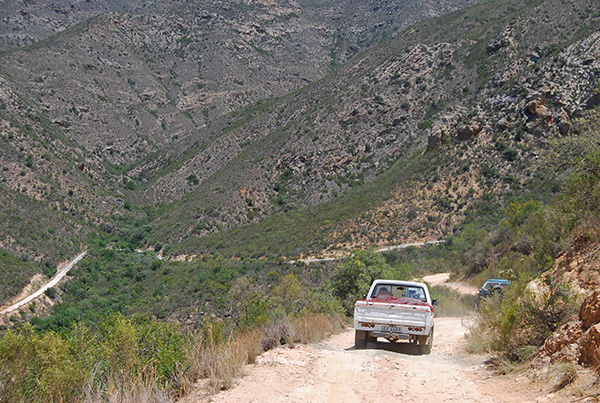 The road passes the forestry station at Cambria before exiting the Baviaanskloof through the spectacular Grootrivierpoort, or Big River Ravine, dominated by rugged rock formations deeply incised by the Groot River. 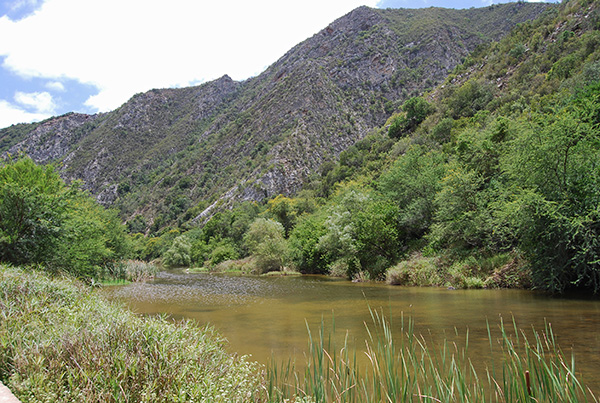 The Groot River marks the Eastern End of Baviaanskloof

The road continues towards Patensie and from there beyond, towards Port Elizabeth.

The 76-kilometre distance from the eastern entrance to the Baviaanskloof Nature Reserve to the tar road at Andrieskraal, leading to Patensie, will take three to four hours due to the rugged nature of the terrain and the rough road. 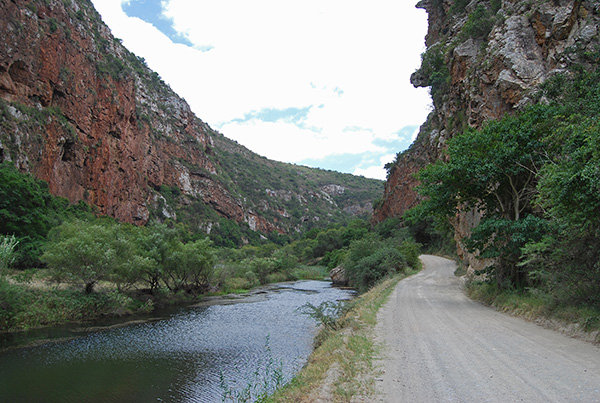 Baviaanskloof is only suitable for high clearance or 4X4 vehicles and the magnificent scenery and the spectacular wilderness environment warrants more than a cursory visit.

The road from Willowmore to Patensie will take five to seven hours of travel and it is preferable to break the journey overnight at one of many secluded guest farms or wilderness camps along the way.