Carnarvon is at the crossroads of the Karoo

There are many roads that lead into Carnarvon from all over the Karoo and despite its remote location the town is often on the route you will travel if you are seeking to avoid the N1 highway as you transit the Karoo. From the north you can travel from Kimberley via Prieska, on the banks of the Orange or Gariep River, and take the long dusty R386 for more than 170-kilometres across the flat plains of the Upper Karoo into Carnarvon. From the south it is more than 120-kilometres from Fraserburg along the gravel R308. Even if you approach Carnarvon along the paved R63 from the west it is more than 120-kilometres from Williston. The tiny villages of Loxton and Van Wyksvlei are closer, but still far enough away to ensure that Carnarvon exudes a sense of isolation and this is the sense one gets when visiting the town.

Carnarvon is a long way from its neighbours and even further away if you are travelling the long, open roads of the Karoo from further afield. The town’s isolation has much to do with a very low rainfall of less than 250-milimetres per annum. The surrounding farms are mostly enormous as the arid environment cannot support large concentrations of livestock and the landscape is vast with the classical conical shaped Karoo "koppies" or hills to break the monotony of the wide open plains. 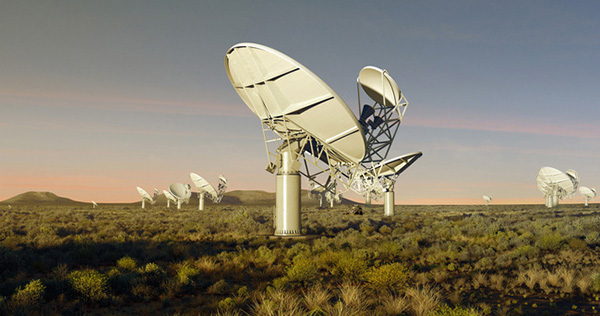 The Square Kilometre Array near Carnarvon

Carnarvon is now, however, the centre of World attention as the Square Kilometre Array (SKA) is under development in the district and will provide a window on the far galaxies of the Universe, more than 50 times as powerful as the Hubble Space telescope.

The high altitude and complete lack of light and atmospheric pollution were pivotal in securing that this important international space project will be centred on the Carnarvon region. The SKA will use hundreds of thousands of radio telescopes, in three unique configurations, which will enable astronomers to monitor the sky in unprecedented detail and survey the entire sky thousands of times faster than any system currently in existence.

The Square Kilometre Array will be the world's largest radio telescope with one million square metres of collecting area. 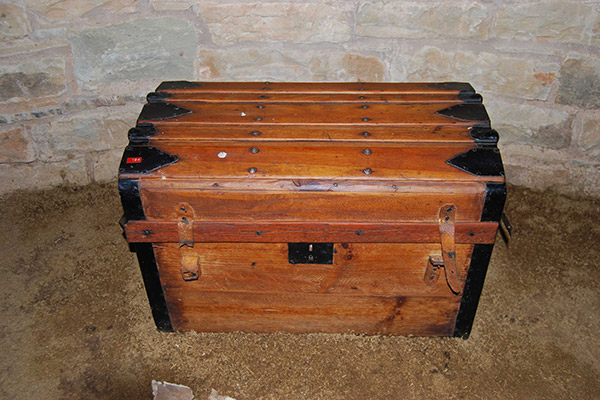 Original yellowwood trunk used by the Trekboers in their ox wagons

Carnarvon is situated south of the Kareeberge or Karee Mountains and is overlooked by a prominent hill known locally as "Koeëlkop" which can be loosely translated as bullet hill. The hill was so named for the bullets left lying around by British soldiers during the 2nd Anglo Boer War, who fortified the hill with the construction of a fort to guard the town against the lightning raids of the Boer Commandos.

The fort fell into disrepair and was rebuilt by a local man, Roy Riley, who used to play in its ruins as a boy. Today the hill is used to accommodate the water reservoir which supplies drinking water to the town. 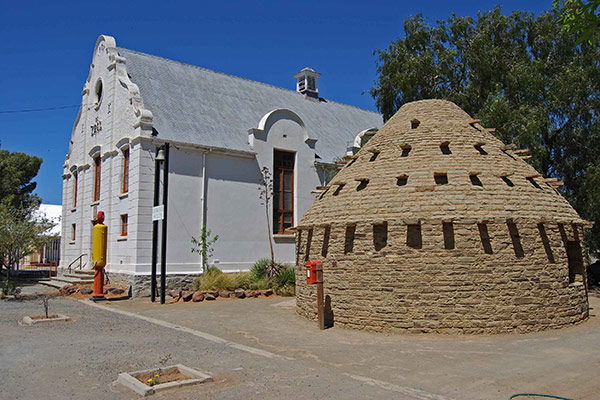 The Carnarvon Museum and Corbelled House in Hanau Street

An excellent example of a local corbelled house is located outside the Carnarvon Museum in Hanau Street. Roy Riley oversaw the relocation of the corbelled house from the farm Biesiesputs, on the road to Loxton. The house was dismantled in sections and rebuilt in its present location.

Inside the corbelled house are a number of artefacts which would have been used by the original "trekboers" or nomadic farmers including an authentic yellowwood trunk, which was used to store the prized possessions of the nomadic "trekboer" family as they moved from place to place by ox wagon. 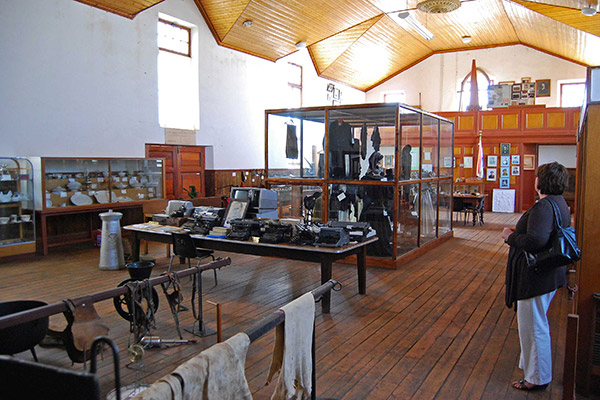 The Interior of the Carnarvon Museum

The Carnavon Museum is housed in the original Dutch Reformed Church community hall which was built in 1907. The museum contains a number of interesting exhibits that trace the history, culture and eccentricities of the Carnarvon district.

The museum boasts a rich array of disparate exhibits ranging from a collection of old typewriters and porcelain to a variety of preserved Victorian era dresses.

There are portraits of locals who achieved high rank in the South African Defence Force and a comprehensive collection of portraits of former mayors of the town, including the well-known writer A.G. Visser. 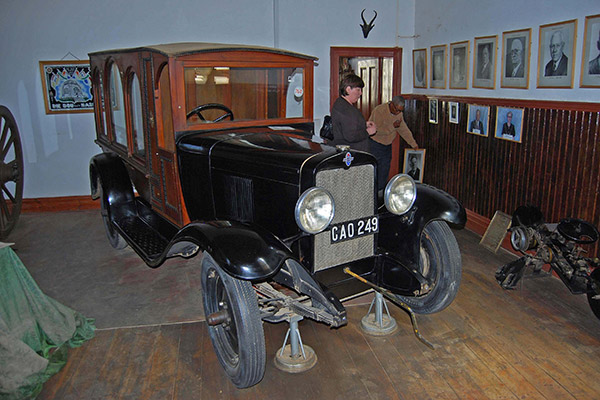 The old Chevrolet Hearse on show in the Carnarvon Museum

An old Chevrolet motor vehicle converted as the old hearse for the Dutch Reformed Church, last licensed to drive in 1971/72, shares exhibition space with old trek wagons. The wooden canopy of the hearse was built by a local Carnarvon carpenter, Mr Mocke.

The town also boast two cultural walking trails. The Skietfontein hiking trail starts at the antique shop in Church Street and follows the winding footpath to historic Skietfontein along the banks of the river. The length of the route is about 8-kilometres in total.

On this trail the walker can get a taste of the Karoo veld or bush and in Skietfontein there are a number of old stone houses that date back to the earliest days of Carnarvon. If you take the time to chat with the residents you will be regaled with stories of “die ou dae” or the old days, and more often than not you will be invited into someone's home for a cup of coffee – and more stories.

Historic residence belonging to the Collins Family in Carnarvon

There is also a Historic Houses trail that starts at the antique shop in Church Street.

Given the age of the town there are many fine examples of Victorian and Edwardian era homes and buildings in Carnarvon and this trail will lead you past all the main attractions including the public library, post office, municipal buildings and the corbelled house and the museum building in Hanau Street.

Other historic buildings include the parsonage of the Dutch reformed Church built in 1912, two beautifully old restored cottages next to the Lord Carnarvon Guest House and the Uniting Reformed Church built in 1858, and parsonage on "Unieplein" or Union Square. The Carnarvon Hotel in Pastorie Street is renowned for its collection of beer cans which are housed in the appropriately named "blikkies" bar. The collection is reputed to be one of the largest in the world.