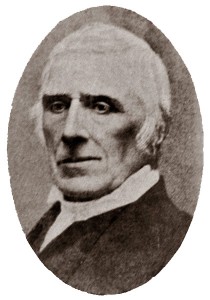 The earliest settlers recorded in the area of Jansenville date back to 1814 with the first settlement of farmers and the formal surveying of the farm Vergenoegd, roughly translated as Far Enough. The farm was granted to one C.E. Schutte in 1820. The ownership of the farm passed to a Mr Prinsloo and ultimately to Petrus Jacobus Fourie.

Jansenville as a formal village had its origins as a parish of the Dutch Reformed Church, an offshoot of the Uitenhage parish. The need for a new parish was evident from as far back as 1848 and the establishment of the village is largely due to the efforts of Minister Alexander Smith from Uitenhage. With the establishment of the new Parish at Jansenville both Dutch Reformed churches at Somerset East and Graaff-Reinet relinquished part of their jurisdiction to the new parish. The new village was named Jansenville in honour of the last Dutch Governor of the Cape, General Jan Willem Janssens. 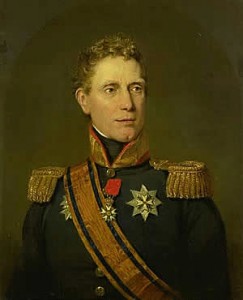 Bridge over the Sundays River at Jansenville

The development of the interior region to the north-east of present-day Jansenville was hampered by the absence of a permanent bridge across the Sundays River linking Port Elizabeth and Uitenhage with the Cape Midlands. After the establishment of the village a petition was drawn up by the local residents in 1859 to ensure that the proposed bridge was located at Jansenville, rather than at nearby Noorsdornplaats. The petition was presented to the Governor, Sir George Grey and eventually construction of the bridge commenced in 1874.

The opening of the Bridge at Jansenville in 1875 was a major event in the life of the village and was described as follows. “The opening of the Jansenville Bridge on the 25th of April 1875, may be regarded as one of the greatest events that has ever taken place in the Midland Districts. It was the inauguration of the bridge over that furious, dangerous, and treacherous torrent, the Sundays River. 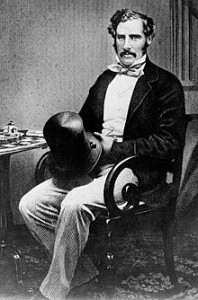 Statistics were compiled by the merchants of Port Elizabeth and subsequently criticized in Parliament, showing that more traffic passed over the road to Graaff-Reinet than over any line in the Colony and it will therefore be seen, even at this distant date, that the opening of this bridge was an event that interested Port Elizabeth, Graaff-Reinet, and the districts beyond.” 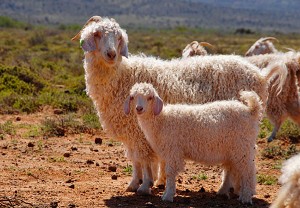 Jansenville is synonymous with the farming of Angora Goats for the production of mohair. The earliest Angora flock in the Jansenville district was established from high quality imported stock by William Cary Hobson on the farm Martyrsford in 1871. In due course, Jansenville and the surrounding districts became the hub of the mohair industry in South Africa and to this day the primary industry is centred on Jansenville. The importance of Jansenville as the hub of the mohair industry is evidenced by the location of the South African Mohair Growers Association and the Angora Goat Breeders Society of South Africa in the village. 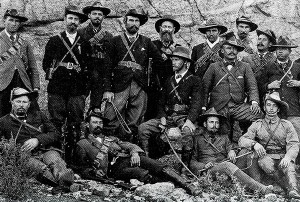 Jan Smuts on Commando in the Cape Colony

In common with many of the smaller towns and villages of the Great Karoo the outbreak of the 2nd Anglo Boer War in 1899 pitted the many the Dutch speaking residents against their English speaking neighbours. Despite the fact that a number of the Dutch inhabitants were loyal to the Colonial Administration the majority favoured the cause of the Boers, with the result that Martial Law was proclaimed, and the town and district came under military occupation under the command of a Captain Gould. 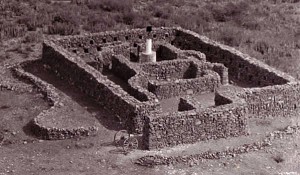 The District was quiet for a while and in January 1901 a group of loyal volunteers who had formed themselves into a Town Guard decided to fortify the town against the growing threat of lightning raids by Boer Commandos. The Town Guard, under the Command of Captain Gould constructed a Blockhouse on a knoll by the bridge over the Sundays River and another at the intersection of Main and Bridge Streets. Both of these Blockhouses have disappeared, however the substantial Jansenville Fort constructed from stone on top of the hill immediately to the north of the village remains to this day and has been recently restored. 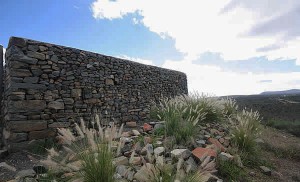 The dimensions of the fort are approximately 21-metres by 15-metres and the outer walls survive in their full circuit to a height of approximately 2-metres, varying in thickness from 80 to 120-centimetres. The walls were constructed with tapered loopholes at intervals of between 1 and 1.2-metres. The middle of the fort features a detached block, which forms two rooms or enclosures, both of which could be entered by several doorways, protected externally by curved screen walls, presumably to shield the occupants from possible stray bullets which could have passed through the loopholes in the outer walls. These rooms served as officers' quarters or as shelters in wet weather. 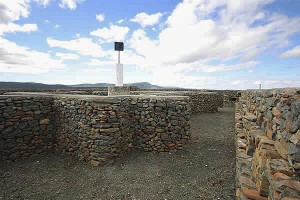 A survey trigonometrical beacon has subsequently been erected in the west room. The fort’s walls were built of stone blocks without mortar and their good condition after more than a century is a tribute to both the Town Guard builders and to the present inhabitants of Jansenville for caring for this historic structure.

Another interesting feature is that, before commencing construction of the fort, the builders levelled the hilltop to form a flat platform which projects some 2-metres beyond the outer walls and is edged with larger stones. This is a sophistication which is generally found only with blockhouses constructed under the supervision of the Royal Engineers at the time.

Jan Smuts, Prime Minister of the
Union of South Africa 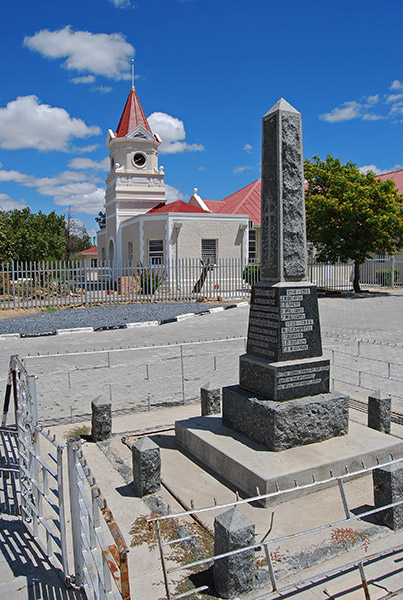 The Jansenville War Memorial with the Town Hall in the background

In November 1901, General Jan Smuts together with his Commandos passed through the district. Smuts used the old disused transport road and at Poortjie, five-kilometres from the village he slept in the house where Sid Fourie was born, passing within 270-metres of the Jansenville Fort en-route to Aberdeen. In 1921, during a luncheon held in his honour in Jansenville, as Prime Minister of the Union of South Africa, General Smuts commented, “It's twenty years ago that I was in this area, when I had to bypass your town. On that occasion, I would very much have liked to have called in for a chat and a cup of coffee, but for your highly armed fort and impenetrable Noors.” 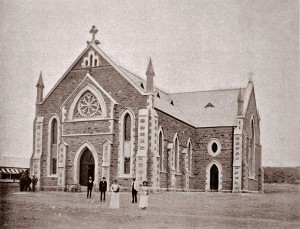 The Jansenville Dutch Reformed Church was
consecrated in 1885

The fertile alluvial soil alongside the Sundays River was leached of nutrients by the incessant cultivation and over grazing by livestock over a period of nearly a century of farming activity. Over time the perennial flow of the Sundays River also ceased. At first there was the loss of a crop every few years and in time this became the order of things. Repeated crop failures resulted in the impoverishment of the local White farmers and the plight of these people became progressively worse in the 1920s. This resulted in many local farmers and residents of Jansenville abandoning their livelihoods with an exodus to Uitenhage and Port Elizabeth. During the years 1925 to 1930 a thousand left the district to settle elsewhere resulting in the decline of Jansenville’s local agricultural economy.