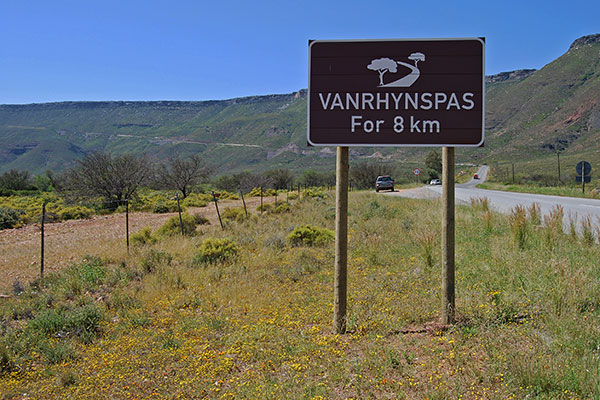 Nieuwoudtville lies at the western edge of the Hantam Karoo a few kilometres east of the Bokkeveld Escarpment that drops sharply to the dry expanse of the Knersvlakte that stretches across a vast swathe of succulent Karoo to the icy waters of the Atlantic Ocean. Most travellers visiting the Hantam Karoo from Cape Town will enter the district via Vanrhynsdorp and the Vanrhyns Pass, which climbs steeply up the western slopes of the Bokkeveldberge before entering the flat escarpment at the summit of the pass that leads eastwards to the village of Nieuwoudtville.

From the summit of the Vanrhyns Pass towards Nieuwoudtville, the R27 passes a gravel road south towards the Oorlogskloof Nature Reserve, which straddles the escarpment and offers spectacular views across the Bokkeveldberge. The reserve is some 4 776 hectares in extent and offers spectacular scenery and protects some of the most varied and important botanical treasures of the Northern Cape. 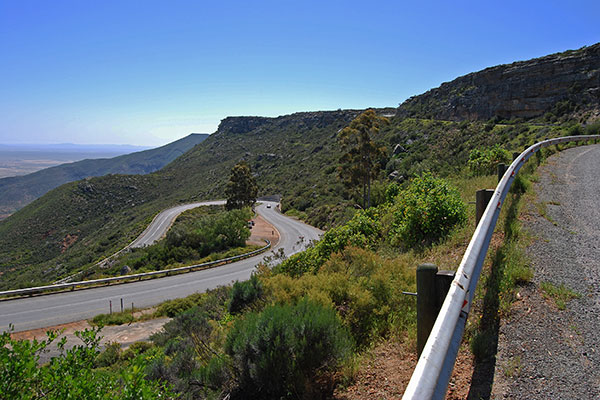 Switchbacks on the Vanrhyns Pass

The Oorlogskloof (ravine of war) Nature Reserve is named after a battle between the early European settlers and the Khoi Chief Jantjie Klipheuwel. The reserve can only be explored by foot, with a variety of hiking trails ranging from single day walks to a seven day hike that takes in all that the reserve has to offer.

Some of the overnight camps have been provided with tents and mattresses. Other camping sites are very basic and include caves, old ruins, stone kraals and clearings under trees.

The views from the rim of the escarpment across the vast plains of the Knersvlakte below and especially the view from Pramkoppie along the rim of the Bokkeveldberge are spectacular.

Given the complete absence of motor vehicles within the reserve the experience is one of peace and solitude and is truly one of the few special wilderness experiences remaining in South Africa. Contact the Reserve office at telephone +27 (0)27 218-1159 for further information.

Another exciting route to Nieuwoudtville from Cape Town is via the Pakhuis Pass (R364) towards Calvinia from Clanwilliam. This pass crosses the rugged Cederberg Mountains and although the road surface is a bit rough and stony, it is truly one of the most beautiful mountain passes in South Africa. The rugged and contorted Cederberg provides endless vistas of wild countryside and the flowering fynbos is particularly beautiful in the spring months. 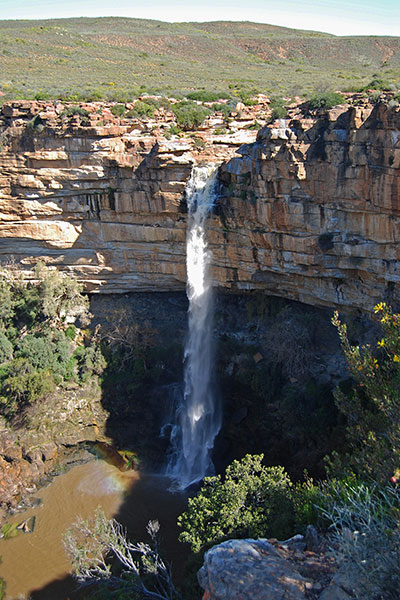 The Doring River tumbles over the Nieuwoudtville Waterfall

The R364 traverses the Doring River Valley after descending the eastern slopes of the Cederberg Mountains. Just north of the Doring River a branch road leads up onto the Bokkeveld plateau and onwards to Nieuwoudtville.

Alternatively you can continue along the R364 towards Calvina ascending onto the Bokkeveld plateau via the Botterkloof (butter ravine). Some 35 kilometres from the Doring River the road branches, providing an easy link across the undulating landsacpe for 44 kilometres to Nieuwoudtville.

The Hantam National Botanical Garden is 5 kilometres south of the village. During the flower season the garden is swathed in a myriad wild flowers and the variety and colour of the flowers range from blue to orange to purple to pink to white to yellow and almost every other colour in-between. The garden features a network of walking trails and cycling routes and is also a birding hotspot.

North of Nieuwoudtville along the R357 towards Loeriesfontein the Willems and Grass Rivers combine to form the Doring (thorn) River which tumbles over 100-metres into the Maaierskloof and the flow of water during the spring months, fed by the spring rains across the Bokkeveld Escarpment, provides a fine spectacle. The Nieuwoudtville Waterfall, which is situated some 7 kilometres from Nieuwoudtville, is a short 100-metre walk from the parking area alongside the R357.