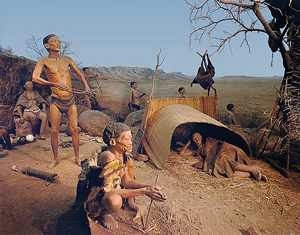 The Bushmen or San were the first inhabitants of the Karoo

In the rough and tough days of the eighteenth century prior to the establishment of Beaufort West as a town, the district was home to both man and beast in fierce competition for the scarce water resources of this arid region of the Great Karoo. Before the establishment of any form of civil authority those who controlled the sparse springs and fountains controlled the land and little thought was given to the justness of usurping control of these water points at the barrel of a gun or by the use of poisoned arrows. Wild animals and particularly predators, the San or Bushmen, runaway slaves from the Cape and a rich cocktail of vagabonds and law breakers regularly plundered the stock farms established by the Trek Boers or migrating farmers moving away from the restrictive laws of the Dutch Colony at the Cape. 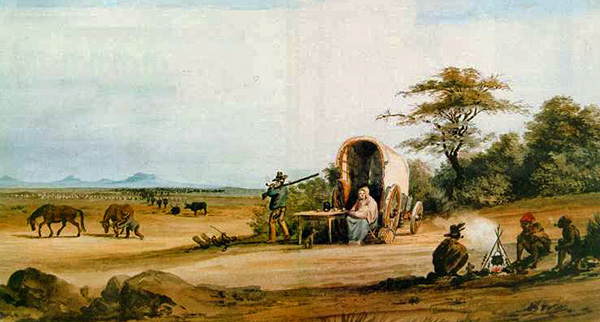 The Trekboers were the first European settlers in the Karoo

In addition there was fierce competition from Xhosa tribesmen for both water and grazing to feed their cattle herds. Adventurers, explorers and big game hunters regularly passed through the district together with ivory traders transporting their heavily loaded wagons on the long journey to the coast. Smuggling of firearms, ammunition and cheap liquor across the ill-defined northern boundary of the Cape Colony was rife and these commodities were in high demand in this lawless environment. 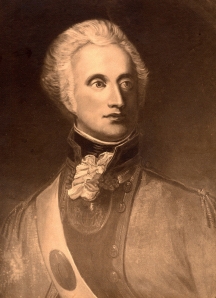 The Dutch authorities in Cape Town paid scant regard to the lawless environment in the vast interior of their ill-defined colony and it was only with the ascendency of British rule at the Cape after 1805 that a concerted effort was made to establish a semblance of law and order in the hitherto lawless far-flung districts of the Colony. 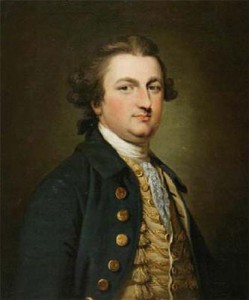 The village of Beaufort was laid out on the farm Hooivlakte, known on its original title deeds as "Hooijvlakte geleegen in de Karoo" or Hooivlakte located in the Karoo granted by Governer Rijk Tulbagh to its original owner Godliep Rudolph Opperman in 1760. The farm Hooivlakte and the neighbouring farm Boesjesmansberg was sold to the Colonial Government for the sum of £1,025 by its owner one Commandant Le Clerq who had fought against the Xhosa in a number of the many frontier wars and was reputed to have killed thirty lions. 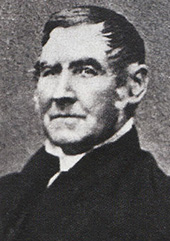 The Dutch Reformed Church parish in Beaufort West was established in 1825 with the arrival of the Reverend Colin Fraser whose parish was ill-defined encompassing a vast area around Beaufort and north into the vast interior and his parishioners were mainly Trek Boers or nomadic farmers who moved from place to place in search of grazing and water for their herds of fat-tailed sheep, cattle and horses. At this time this frontier region still teemed with wild animals and a delightful story related in Lawrence Green’s book, Karoo, illustrates this daily reality.

The Reverend Fraser would often sit in the shade of a mimosa tree on the banks of the Gamka River just outside the village to meditate and to read his Bible. “One day the Minister was sitting with his eyes closed when he felt a sudden weight on the Bible and looked up into the face of a lion. Fraser prayed. The lion then rushed away into the bush. Next moment Fraser was surrounded by Bushmen. They were carrying spears, bows and arrows, for they had been hunting the lion.” The establishment of the town signalled the demise of the Bushmen in the district and after a period of prolonged conflict with the townsfolk and the farming communities the Bushmen simply moved away into the vast spaces of the northern interior. 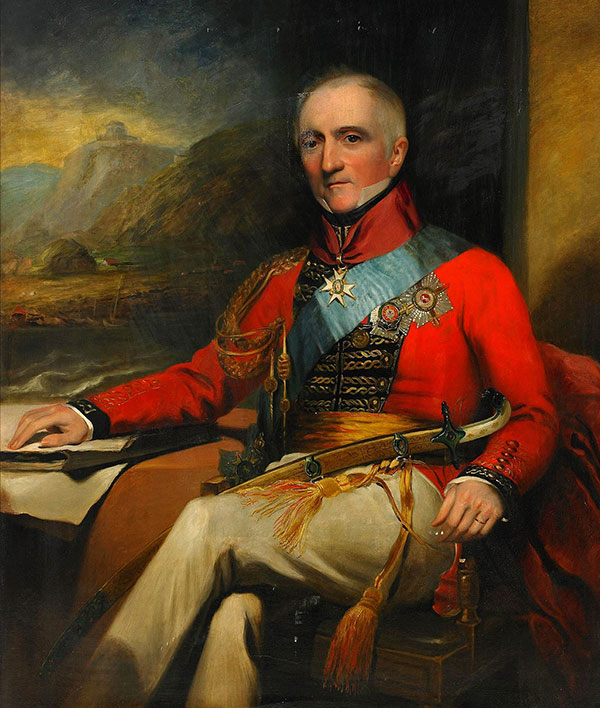 By 1830 the rule of law had been established and the murder of Louis Nel, a local farmer and his four children resulted in the trial and execution of Reuter Calie, a farm labourer, on the public gallows erected in the town. In 1840 Jan Lodewyk du Preez shot at and killed one of two Khoi children who were raiding his orchard. He was tried for murder, sentenced to death and hanged in public.

Beaufort West’s main street is hardly ordinary, behind its name lies the tenderest of love stories. The street was named in honour of Sir Rufane Donkin, who acted as Governor of the Cape Colony from 1820 to 1821. 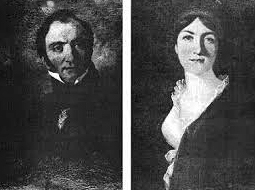 Beaufort West has the distinction of becoming the first municipality in South Africa. The villagers took advantage of an ordinance allowing for the election of councillors and the municipality was established on 3 February, 1837. Two weeks after this election Beaufort West was flooded as a raging torrent swept down the Gamka River which destroyed two houses and resulted in the death of a little girl who was drowned while walking along the road. Beaufort West has been prone to flooding over the years. In 1869 the town’s dam wall collapsed as a result of excessive rainfall causing £60,000 in damages and the destruction of six houses. Beaufort West’s most destructive flood occurred in 1941 when the Gamka River burst its banks flooding almost every building in the town and causing £100,000 in damages. A milkman making his rounds was the only fatality. 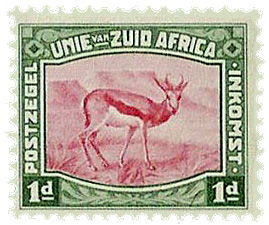 The Springbok is celebrated on this
1923 South African Revenue Stamp

In the early nineteenth century the Karoo was a wildlife paradise and home to literally millions of Springbok. Sir John Fraser, the son of the Reverend Colin Fraser, described an extraordinary migration of Springbok and other antelope species through Beaufort West in 1849.

Lawrence Green’s book, Karoo, picks up the story.
"A smous, or peddler, drove into the village one day looking bewildered, and told the people that countless buck were on the way, leaving the veld bare. This report was not taken seriously. Soon afterwards the people of Beaufort West were awoken one morning by the trampling of all kinds of game. Springbok filled the streets and gardens, and they were accompanied by wildebeest, blesbok, quagga (now extinct) and eland. For three full days the "trekbokke" or migrating antelope passed the village and they left the veld looking as though it had been consumed by fire." 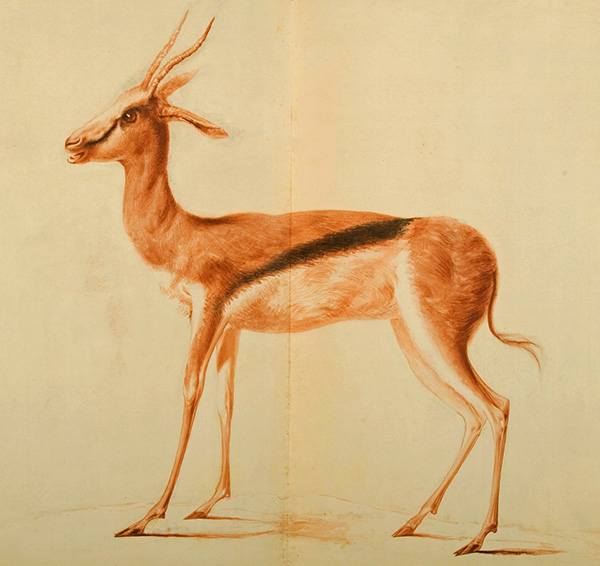 Historic painting of a Springbok by Frederick Birnie from
the Special Collection in the University of Glasgow, Scotland

The movement of small groups of Xhosa into the Karoo during the late 18th century resulted from a century of frontier wars in the Eastern Cape. This movement accelerated subsequent to the great cattle killing of 1856 and 1857. Continual warfare, stock losses and social upheaval, coupled to their herds being decimated by a lung disease, gradually weakened the Xhosa and caused them to turn to traditional beliefs for guidance. They were captivated by the prophecies of a 14-year-old girl from the Gxarha River area north of the Kei River. In April or May 1856, the teenaged Nongqawuse and her friend Nombanda went to fetch water from a pool near the mouth of the Gxarha River. 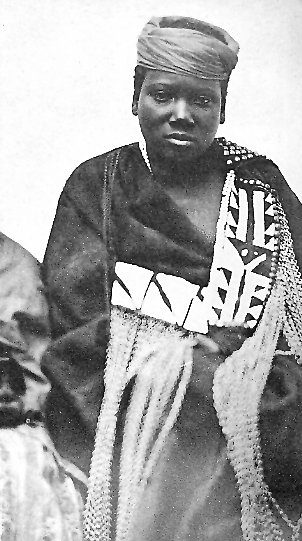 When she returned, Nongqawuse told her uncle and guardian Mhlakaza, a Xhosa spiritualist, that she had met the spirits of three of her ancestors. She claimed that the spirits had told her that the Xhosa people should destroy their crops and kill their cattle, the source of their wealth as well as food.

In return the spirits would sweep the British settlers, who were threatening their age old pastoral existence into the sea. In the vision the Xhosa would then be able to replenish their granaries, and replace their depleted and sickly cattle with more beautiful and healthier cattle. During this time many Xhosa herds were plagued with "lung sickness", possibly introduced by European cattle.

By 1856, many cattle had died, and the Xhosa believed that the deaths were caused by witchcraft. Mhlakaza repeated the prophecy to Paramount Chief Sarhili who ordered his followers to obey the prophecy, causing the unprecedented destruction of between 300,000 and 400,000 head of cattle.

As a result 40,000 people died of starvation and many Xhosa migrated into the Karoo in search of work in order to survive. 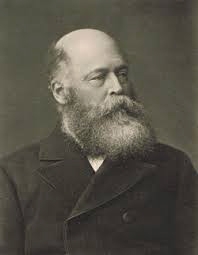 Sophie Gray, wife of Bishop Robert Gray of Cape Town, described these Xhosa migrants as little more than emaciated skeletons staggering into the villages across the Karoo, including Beaufort West. Many of these migrants fleeing starvation in the devastated lands east of the Kei River helped build some of the beautiful stone kraals that have become a feature of the Karoo. These early Xhosa migrants into Beaufort West settled in the town and are the direct descendants of many of the residents of Kwa-Mandlenkosi in Beaufort West. The township was renamed in 1985 to honour the memory of 24-year-old Mandlenkosi "Tsaka" Kratchi, a promising young boxer who was shot and killed in a police raid in 1985 during the struggle for civil rights and freedom in South Africa. 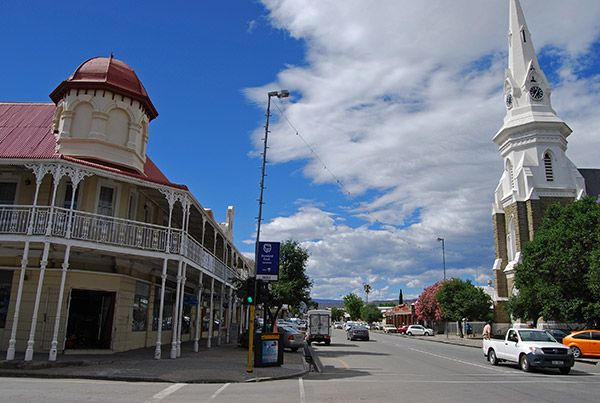 One of the most important and long lasting events that has been the mainstay of the local agricultural economy was the introduction of merino sheep to the district by John Molteno, who was a young Anglo-Italian immigrant, which to this day are extensively farmed across the Karoo. Molteno arrived in Cape Town from England in 1831 at the age of 17. He had a profound impact on the development of Beaufort West by opening the town’s first bank in 1854 and later became a champion of responsible government and the Cape Colony’s first Prime Minister.

Molteno was instrumental in the development of South Africa’s railways during his tenure as Prime Minister of the Cape Colony and when the rail-road reached Beaufort West in 1880, en route to the diamond fields in Kimberley and later further north to the gold fields in Johannesburg, the town became an important marshalling yard and locomotive depot. As late as the 1970s the mainline trains would switch from diesel locomotives and later electric locomotives from Cape Town to steam engines for the section of the railway between Beaufort West and Kimberley.