The earliest inhabitants of the northern slopes of the Swartberg Mountains in the vicinity of modern-day Prince Albert were the San or Bushmen.

As the early trekboers or nomadic farmers moved into the area during the mid-eighteenth century the inevitable conflict between the pastoral activities of these early European settlers and the hunter gatherer lifestyle of the Bushmen eventually resulted in the Bushmen’s movement away from the district into the vast open spaces of the Great Karoo to the north or their assimilation into the local population. 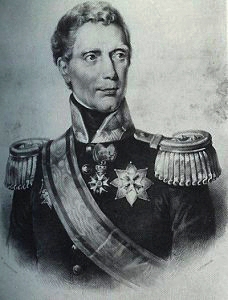 The settlement at Prince Albert grew from the loan farm Queeckvalleij established by Zacharias and Dina de Beer in 1762. As with many of these early settlers, De Beer was an eccentric, carving a farm from the wilderness in which he and his wife settled.

In 1804 Generals Janssens and Lichtenstein visited the area. De Beer paraded the entire population of the settlement, numbering about twenty individuals, armed with muskets while he sported a sword in honour of the occasion with the Batavian Flag fluttering above. 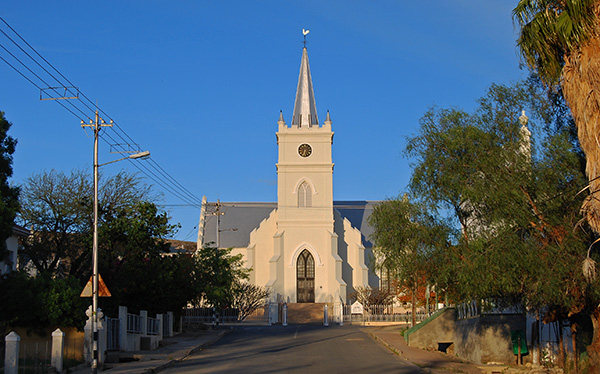 De Beer provided locally produced brandy and a fine meal for his esteemed visitors, however his somewhat boorish demeanour failed to impress Lichtenstein who described him as “a vain, bigoted, dominating political fanatic who looked with contempt on his neighbours.”

De Beer venerated the heroes of the French Revolution naming his two youngest sons John Bonaparte and Nicholas Moreau. At the age of three Bonaparte fell into a water cistern and drowned. De Beer was later appointed Veldkornet or Administrator of the district by Lord Charles Somerset. 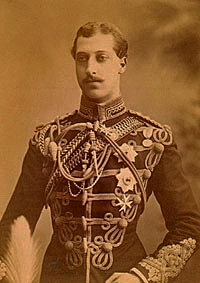 The fertile valley fed by the streams flowing down the northern slopes of the Swartberg Mountains attracted many other farmers to the district and by 1844 the first minister was appointed to the Dutch Reformed Church in the village.

The village was officially named Prince Albert in 1846, in honour of Queen Victoria's consort. Honouring the memory of her husband, who had passed away in 1861, Queen Victoria sent a book containing Prince Albert's speeches to the village in 1867 which is now on display in the Fransie Pienaar Museum. 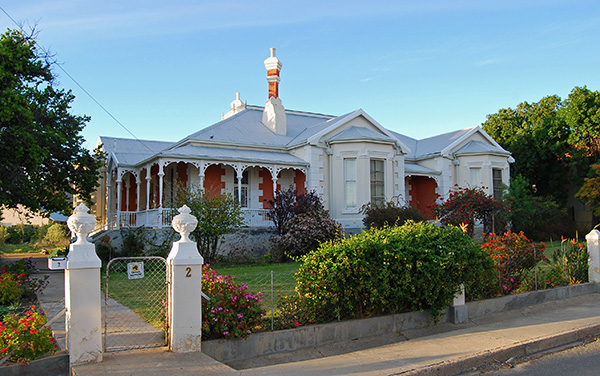 The village continued to develop and in 1849 a post office was opened followed by a school in 1852. This was followed by a reading room in 1857 which resulted in the opening of the village library in 1862. The library was unfortunately lost in a fire in 1949. Further development in the village saw the replacement of the old Dutch Reformed Church with the present day church which was consecrated in 1865.

The splendid mission parsonage was built in 1858 by Helmuth Luttig and occupied by the Luttig family until 1907 when it was acquired by the Dutch Reformed Church and used as the manse. The building boasts a Prince Albert gable which is typical of many of the buildings of its time in the village.

Bishop Robert Gray, the first Anglican Bishop of Cape Town, was much taken by the spectacular setting of Prince Albert and was instrumental in the purchase of land to establish an Anglican school and chapel and a manse for the priest. The Church of St John the Baptist was completed in 1896 together with the church hall a year later by the builder George Wallis.

The Age of Steam at Prince Albert Road Station 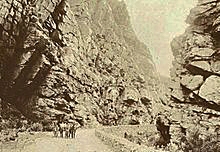 The Swartberg Pass in the 1880s

The railway linking Cape Town with the interior reached Prince Albert Road in 1879 and this further spurred development in the village. Passengers and mail were transported by road the 44-kilometres from the railway station out in the vastness of the western Koup to the village.

However, the most significant development in the transport links with the remote village was the construction of the spectacular Swartberg Pass over the Swartberg Mountains linking Prince Albert and the far flung communities of the western Great Karoo with Oudtshoorn in the Klein Karoo. The construction of the Swartberg Pass was driven by the need for an alternate transport link between the Great Karoo and the Klein Karoo as Meiringspoort, 55-kilometres to the east, was often closed due to the flooding of the Groot River, or Big River, making travel between the Great and Klein Karoo impossible for weeks and months at a time.

The construction of the Pass begun in 1881 resulting from a tender process with the work awarded to Jan Tassie with an 18-month construction period and a budget of £18 120. Tassie imported labourers from Delagoa Bay in Mozambique and the project was bedevilled by the desertions of these labourers and only five and half kilometres of the project had been completed before he was declared insolvent. 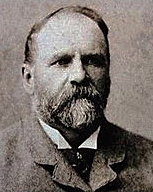 The decision was then taken by the Cape Colonial Government to complete the project internally using convict labour with Thomas Bain overseeing the project. Bain commenced construction in November 1883 and the torturous route to the summit of the Swartberg Mountains was completed by the end of 1884. In May 1885 extensive flooding in the area washed away portions of the newly constructed road necessitating further construction to ensure that the route was situated above flood levels. 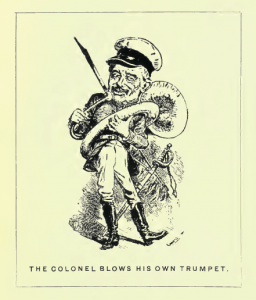 The pass was opened for light traffic from March 1886 and after September of that year the pass was opened to carts and wagon traffic on Fridays. A regular post-coach service was introduced linking Prince Albert and Oudtshoorn over the pass. With much fanfare involving a 21-gun salute and the clinking of champagne glasses, the Swartberg Pass was opened by Colonel F Schermbrucker on 10 January 1888. The Colonel’s words at the opening that, "ten-thousand travellers will in future feast their eyes on this beautiful picture" has echoed over the more than 125-years since this most beautiful of mountain passes was opened.

The first motor car to traverse the pass was driven by a certain Doctor Russell from Oudtshoorn in 1904. Unlike Meiringspoort and Seweweekspoort to the west where flooding often closed these routes through the mountains, snow blizzards at the high elevations along the pass can result in the closure of the road even in modern times. 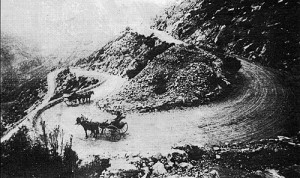 Horse and Carriage on Swartberg Pass in the 1880s

Many an unsuspecting traveller along the road in the early days before motorised transport was caught in snowstorms around the summit of the pass and perished from hypothermia and exposure to the elements.

Despite this fanfare the darker side of the picture, as described in Lawrence Green’s book Karoo, was the death of some 150-convicts who failed to survive the gruelling conditions and the five-years of hard labour involved in the construction of the Swartberg Pass. One thousand convicts comprising eighteen convict gangs, including one white convict gang, forty constables armed with rifles and dogs and twenty prison warders arrived in Prince Albert in 1883 from the railway station at Prince Albert Road to work on the construction of the pass – possibly one of the grimmest cavalcades of humanity ever witnessed in the Great Karoo. 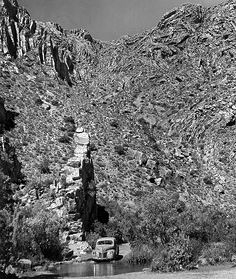 Swartberg Pass in the mid-20th Century 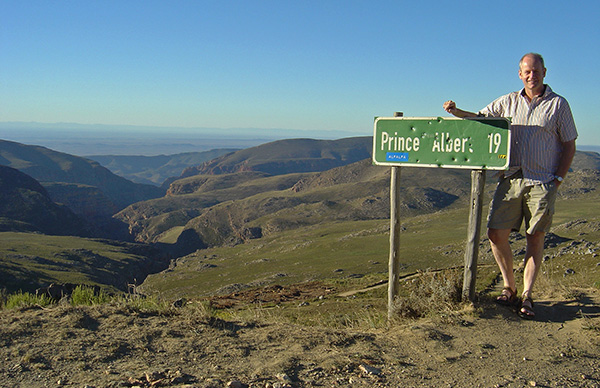 The summit of the Swartberg Pass

The final cost for the construction of the Swartberg Pass was £14 500, excluding convict labour worth £17 000, and the result was the first all-weather link between Prince Albert and the Great Karoo to Oudtshoorn and the port of Mossel Bay.

The magnificent dry-stone retaining walls and the spectacular vistas along the pass have attracted countless travellers over the more than a century since the completion of the pass and although no longer a major transport route the Swartberg Pass remains a must for those who revel in the beauty and splendour of magnificent mountain landscapes and long views to distant horizons. On a clear day from the summit of the pass, at 1 583-metres, one can see more than 150-kilomtres to the Nuweveld Mountains in the north that tower above distant Beaufort West.

Prince Albert also experienced its own mini gold rush in 1891 after the discovery of a gold nugget on the farm Klein Waterval or Small Waterfall. Excited miners flooded into the village and 1042 claims were registered ultimately producing a paltry 504 ounces of gold. Gold fever faded and the gold prospectors moved on with the village settling down to its usual tranquil existence. Some of the relics of the gold rush can be viewed at the Fransie Pienaar Museum in the village. 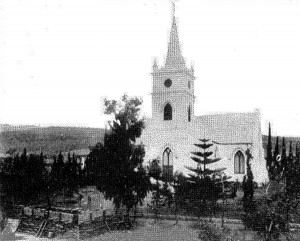 The fortified Dutch Reformed Church during the Anglo Boer War

The Anglo Boer between 1899 and 1902 had a minimal effect on Prince Albert as the village was situated almost at the periphery of the operational area of the Boer Commandos within the old Cape Colony. A British garrison was established in the village to protect the district from the Boer Commandos and the Dutch Reformed Church was fortified to ensure protection against any lightning raids from the Boers. 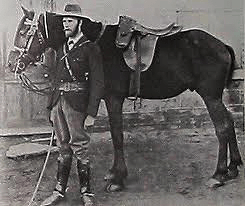 Jan Smuts on Commando with his horse Charlie

In 1901 Boer Commandos seized the mail coach and more importantly the horses at Botterkraal on the road between Prince Albert Road and the village. Boer Commandos under General Jan Smuts and Commandant Gideon Scheepers were active in the area and Scheepers was captured in October 1901 near Bosluiskloof west of Prince Albert after falling sick. He was later moved to Beaufort West and from there to Graaff-Reinet where he was executed by British firing squad in January 1902.

Many strange and eccentric characters have made the forbidding mountains and valleys in the Prince Albert area their home over the more than two and a half centuries since the village was established. One such eccentric character was a local farmer nicknamed Mal Theunis or Mad Theunis. Lawrence Green in his book Karoo takes up the story. 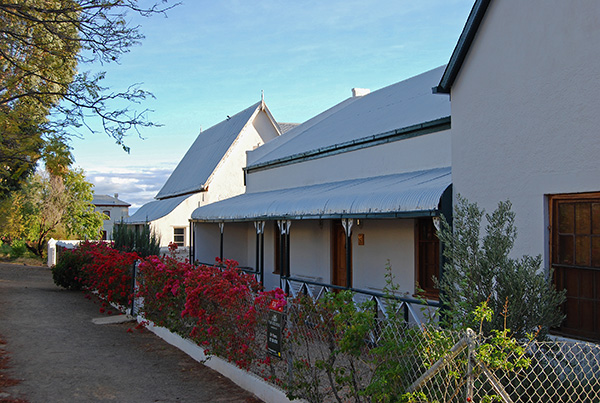 "His madness, however, was the result of an accident which was typical of the lurking dangers of the Swartberg range. Theunis went into the mountains with his father after a leopard which had killed a calf.

They cornered the leopard in its cave in a krans with a seventy-foot drop below, the ground at the foot being covered with thornbush and spiky mimosa saplings used for fencing. One of the dogs, a ferocious, yellow, stump-tailed baboon slayer went in boldly and took the leopard in the rear. After a short fight the dog emerged with its scalp missing and the leopard in pursuit.

The father had his flintlock muzzle-loader with him, an old-fashioned 'Sanna'. He fired and wounded the leopard, which rushed at Theunis and gripped his shoulder. Locked together Theunis and the leopard went over the cliff. The leopard was impaled on the sharp trees and was killed at once.

Theunis fell clear into soft sand. He was carried back to the farm and remained unconscious for days. The doctor, after a ride of fifty miles on horseback, pulled him round, but he was never the same after that experience. He was Mal Theunis." 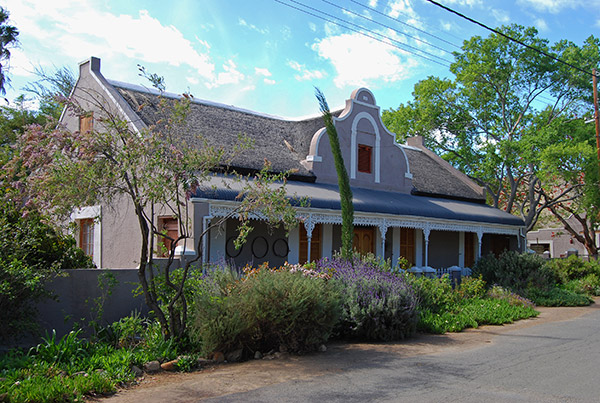 In more recent times Prince Albert has become a favoured destination and home for artists and other creative people and for those seeking the peace and tranquillity of the Great Karoo in arguably one of the most beautifully situated villages in all of the Karoo.

Extensive renovations of the old buildings and residences in the village have seen property prices escalate as more and more people from South Africa’s bustling cities seek the peace and quiet of Prince Albert on the southern edge of the Great Karoo.