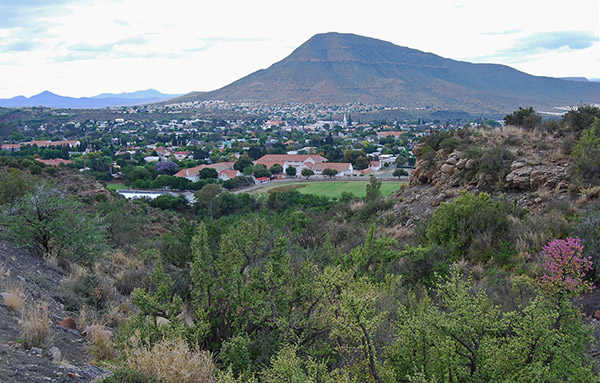 View across Graaff-Reinet from the Mountain Drive

Arguably the principle town of the Great Karoo and the undoubted gem of the Camdeboo, Graaff-Reinet is beautifully situated in the midst of the foothills of the Sneeuberge, or Snow Mountains, with its historical heart encompassed by a broad horseshoe bend of the Sundays River. Graaff-Reinet has become an elegant and beautiful town evolving from a collection of mud and daub huts from the late eighteenth century.

The historical horseshoe centre of the town is snuggled against the bank of the Sundays River with its broad streets lined by elegant historical homes, many of which date back to the mid nineteenth century.

To truly appreciate the atmosphere of Graaff-Reinet take a stroll along these elegant streets and savour the varied architecture set against the backdrop of the surrounding mountains and the bulk of Spandau Kop in the Camdeboo National Park. The maintenance and restoration of Graaff-Reinet’s historic buildings is a local obsession and it is impossible to visit the town and not see a number of restoration projects in full swing.

The town boasts more than 220 national monuments, more than any other town in South Africa. Anton Rupert, the former head of the Rembrandt Group, was born in Graaff-Reinet and has devoted considerable resources to the restoration and preservation of Graaff-Reinet’s rich historical and architectural heritage.

The town boasts fine examples of Cape Dutch architecture together with Georgian, Victorian, Edwardian and typical Karoo-style square shaped flat-roofed cottages which are often the oldest residences in town. 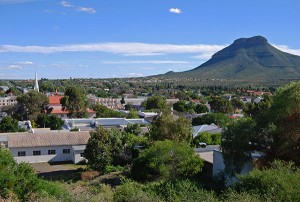 View of Spandau Kop across Graaff-Reinet 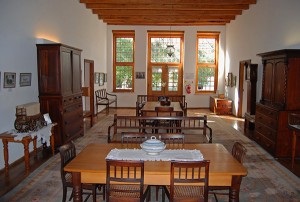 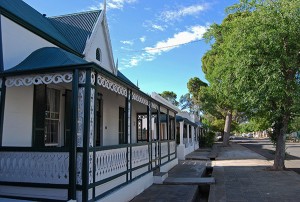 Leiwater channels provide water for the
gardens of Graaff-Reinet

English settlers in the town from the 1850s onwards embellished their residences with carved wooden posts and balustrades together with lattice trellis work known locally as "broekie lace." The more elaborate gabled Cape Dutch architectural style was much more expensive to construct and therefore largely out of the reach of the average resident. The wide array of fine examples of Cape Dutch style were generally built and owned by the more wealthy and important residents and as manses for the Dutch Reformed Church. 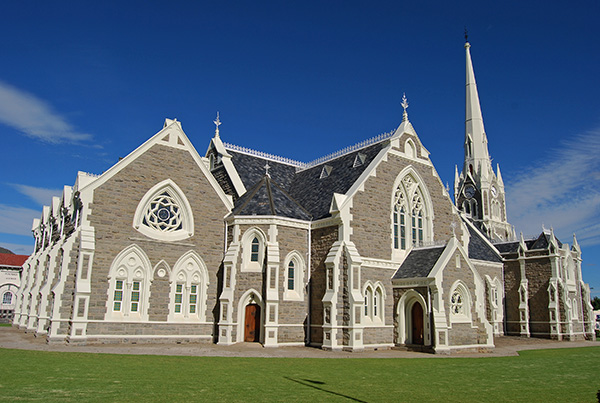 Some of the commercial buildings were embellished with covered verandas extending over the street to afford their clientele covered access to their premises. In typical Karoo style the entrances too many of these historical residences face directly onto the street with large spacious gardens at the rear of the houses providing privacy and sanctuary for the residents. Many of the streets are lined with "leiwater" or water channels fed from the nearby Nqweba Dam which allow residents the opportunity to irrigate their gardens and orchards at set times during the week.

The centre-piece of Graaff-Reinet is undoubtedly the magnificent Dutch Reformed Church that stands in the centre of the town at the northern end of Kerkstraat, or Church Street, that leads into town from the south. The church stands in its own square bounded by the round-about at the terminus of Church Street and by Caledon Street, Graaff-Reinet’s commercial main road. The church is the fourth Dutch Reformed Church to have been built and is the third in its current location. The foundation stone of the church was laid in 1886 and the church was completed in 1887, with its design inspired by Salisbury Cathedral in England. 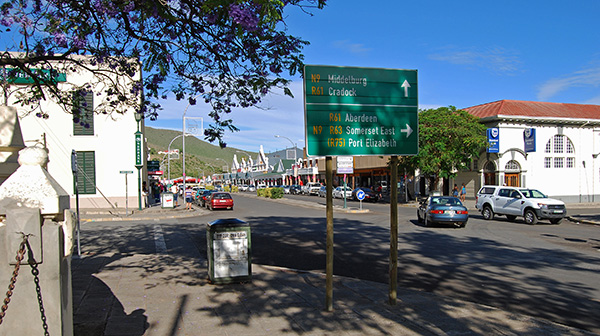 Caledon Street crossroads in the centre of Graaff-Reinet

Graaff-Reinet lies at the crossroads to many towns and villages spread across the central and eastern sections of the Great Karoo. To the north the N9 highways links the town with Middelburg and Colesberg in the Northern Cape, whilst to the south the N9 highway links Graaff-Reinet with Aberdeen and Willowmore. From Aberdeen the R61 traverses the immense plains of the Camdeboo and Koup to distant Beaufort West. 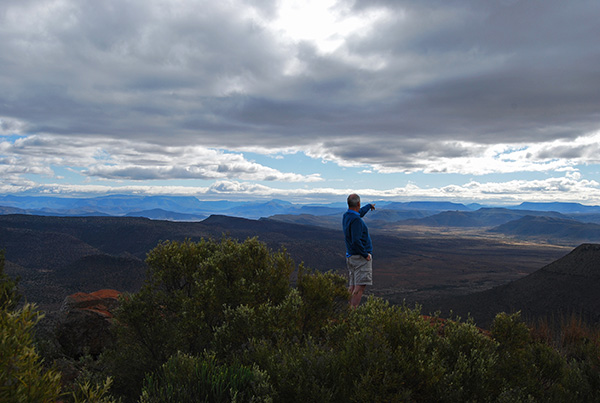 Far horizons in the Camdeboo District

Just south of the town the R75 branches off the N9 highway towards Jansenville and Port Elizabeth, whilst the R63 branches off the R75 to the south-east towards Pearston and Somerset East. To the north-west the R63 crosses the Sundays River ascending the Oudeberg Pass towards Murraysburg in the Western Cape and beyond to Victoria West in the Northern Cape.

The isolated village of Nieu Bethesda is accessible via a gravel road just beyond the summit of the Oudeberg Pass leading off the R63 towards Murraysburg or via the N9 highway towards Middelburg. The R61 branches off the N9 highway north of Graaff-Reinet, crossing the Wapadsberg Mountain Pass towards the Mountain Zebra National Park and the historic town of Cradock in the fertile valley watered by the Great Fish River.

Other than towards the south and the wide open plains of the Camdeboo, Graaff-Reinet is almost completely surrounded by mountains and this full array of mountain landscape is protected within the Camdeboo National Park. The town enjoys the distinction of being almost completely surrounded by this National Park thus ensuring that the splendid vistas from the town towards the surrounding mountains will remain unspoilt for posterity.