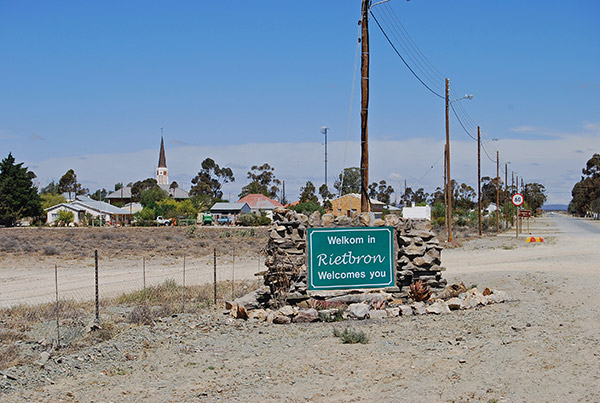 The entrance to Rietbron village on the road from Beaufort West

There are a number of roads that lead into Rietbron and none of them are main roads and all of them are gravel. Rietbron is one of the few Karoo villages that is truly tucked away from the passing traffic hurrying through the Karoo to reach their destinations on the coast or up-country. If one travels to Rietbron it is a conscious decision and you will discover a genuine Karoo village without any of the trappings of the helter-skelter World in which we live. 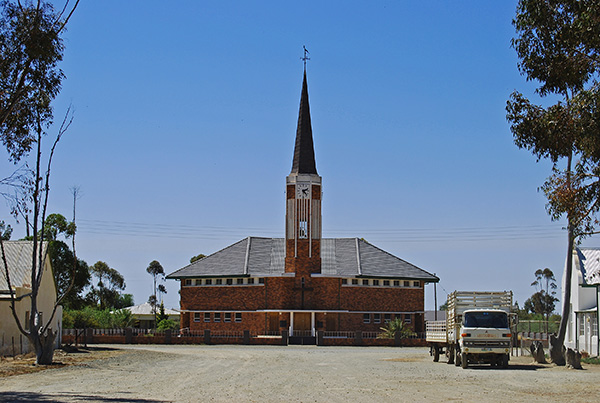 Unlike most parts of the Karoo the landscape around the village is completely flat and it almost seems that you can see the curvature of the Earth as you approach the village on the gravel road that snakes across the "vlaktes" or the flats from Beaufort West.

Other lonely roads snake across the "vlaktes" from distant Karoo towns and villages such as Aberdeen, Willowmore and Prince Albert.

The principle activity of the area is farming and the district stretching from Rietbron through Willowmore and Jansenville is the centre of the mohair industry in South Africa.

Farming with Angora goats, Merino and Dorper sheep are the principle agricultural activity although the very low average rainfall of less than 200-milimetres per annum means that the carrying capacity of the land is very low.

In common with a number of the smaller, isolated Karoo villages, Rietbron has experienced a slow exodus of residents over the years. However, the heart of the village remains intact with its church, school, agricultural association, woman’s club and tennis club still very active.

The Rietbron Dutch Reformed Church was built in 1953 after a fire destroyed the original building. It is unique in that it boasts the only Springbok weather vane to grace a church steeple in South Africa.

The town museum is located in the Afrikaanse Christelike Vroue Vereeniging hall (Afrikaans Christian Women’s Association), originally built in 1927, and is filled with a collection donated by the local community and includes a variety of antique farming equipment.

Hunting safaris are popular in the district and many farms in the area are well-stocked with eland, impala, springbok, kudu and many smaller antelope. Hunting information for the Rietbron district is obtainable from the Baviaans tourism office in Willowmore on telephone +27 (0) 44 923 1702.