Williston has its origins as a farm established by one Johan Abraham Nel who settled together with his family at a spring near the Sak River in 1768.

In commemoration of the birth of one of his sons, Johan Nel planted an almond tree after which the town was named Amandelboom.

The area was always subject to crippling drought and the supply of water was at best erratic even at the best of times. Many years later a local clergyman, the Reverend S Kuhn, blew up the spring with dynamite in order to increase the flow of water. All he succeeded in doing was to blow up the almond tree, the water flow remaining at a constant dribble.

In the early 19th century the district was populated mainly by the so-called Basters, who were pastoralists moving their livestock from one spring to another in a constant search for fresh grazing. The name “Basters” came into use in the Cape Colony during the 18th Century and described the nomadic frontiersman of mixed race. The Basters were mostly descended from Khoi mothers and Dutch trekboers or nomadic farmers.

In 1845 the Basters requested that the Rhenish Mission station at Wupperthal establish a parish at Amandelboom and during the same year two missionaries arrived in order to take care of the spiritual needs of this isolated community. 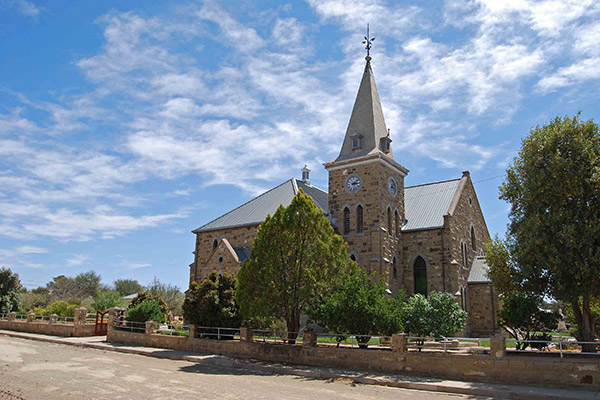 From about 1860 white nomadic farmers began to arrive in the district in numbers and their arrival precipitated the movement of many of the Basters out of the district.

The Basters who left the district under the leadership of the Reverend Heidemann migrated north across the shimmering wastes of Bushmanland, across the Orange or Gariep River into Namibia eventually settling at Rehoboth.

The first Dutch Reformed Church was built in 1878 and the town’s name of Amandelboom was retained.

The name Amandelboom was however changed to Williston in 1883 after the Cape Colonial Secretary during the 1880s.

The fine stone Dutch Reformed Church in the centre of the town was completed in 1912. The tree-lined roads in Williston are largely due to the efforts of JH Swart, a primary school teacher, who lived in Williston during the 1930s who together with his students engaged in a massive tree planting project.