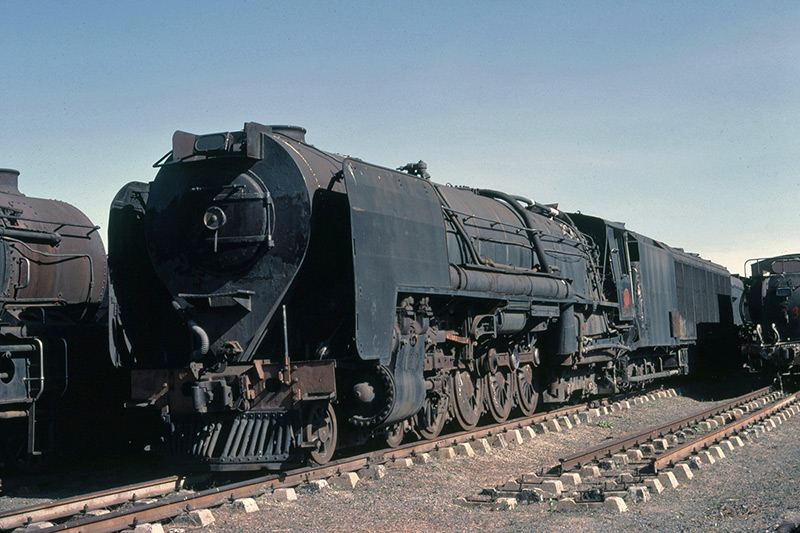 De Aar has its origins, unusually not as a parish of the Dutch Reformed Church, but rather resulting from an Act of Parliament in Cape Town in 1881 which paved the way for the extension of the railway line from Beaufort West to De Aar and ultimately beyond to the diamond fields of Kimberley. By September 1884 the railway line to De Aar was completed and the first train arrived at what was first named Brounger’s Junction. 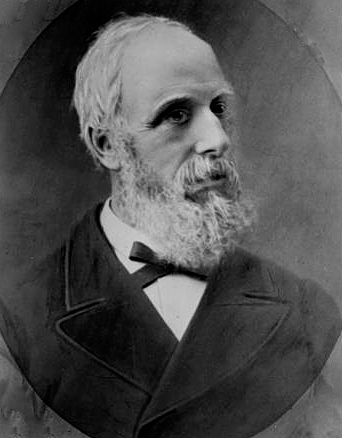 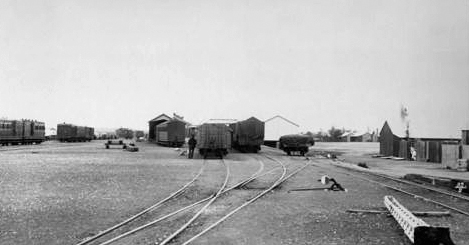 During his term of office the lines from Cape Town and Port Elizabeth were almost completed to De Aar, and for a few months the junction at De Aar was known as Brounger's junction reverting to De Aar after a few months. 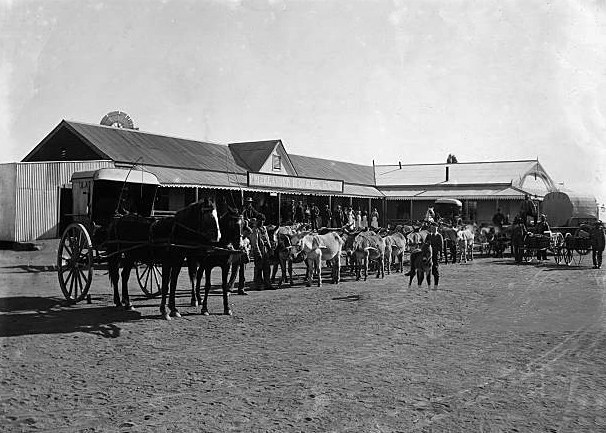 The development and establishment of De Aar is however largely due to the foresight and vision of Jewish brothers Wulf and Isaac Friedlander. The story of De Aar however begins more than half a century before the arrival of the Friedlander brothers in 1879.

In 1837, the first farms were allotted to the "trekboers" or nomadic farmers of Dutch origin. In 1839, Jan Vermeulen took possession of the farm in the environs of De Aar in exchange for a span of oxen and a wagon. 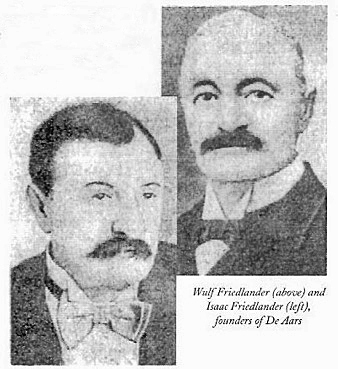 A continent away the Frieldlander brothers left their home in Latvia to escape the on-going persecution of Jews by the Russian state and arrived in Cape Town in 1878. With some foresight and a keen grasp of the opportunities presented by the expansion of the railway network in the Cape Colony, Isaac and Wulf Friedlander obtained an ox wagon and in 1879 travelled to the De Aar District and settled at Rhenosterfontein. There they opened a trading station with an adjacent small hotel. 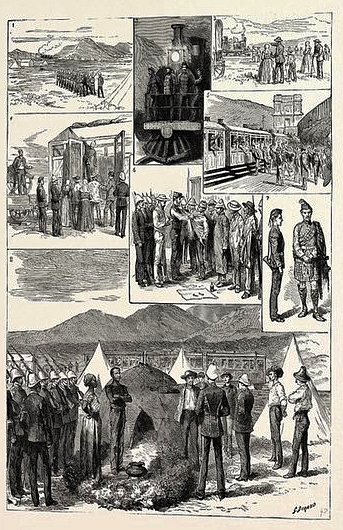 Illustrations from the De Aar Expedition of 1884

The development of the railway from Beaufort West required the importation of labourers to work on the line and this attracted approximately 1,400 Zulu and Fingo workers, who pitched their tents at the new railway junction at De Aar. Construction began on the railway and great progress was made. However, in 1883, certain disputes arose between some of the Zulu and Fingo workers and there were repeated violent clashes between the two groups. The situation deteriorated and the final conflict between the two groups on Christmas Day 1883 resulted in 60 dead and many more wounded. A large body of Cape Mounted Rifles under Colonel Southey, that became known as the "De Aar Expedition," arrived to successfully quell the fighting and bring order to the situation. 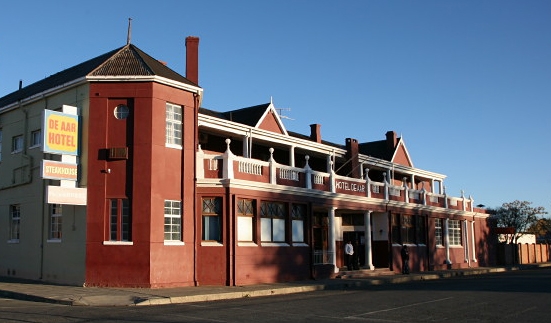 The Friedlander brothers negotiated a lease of £400 pounds per annum with Mr J.M. Grundling, owner of the farm De Aar in 1879. Soon thereafter a wood and iron General Dealer’s shop was constructed. A Hotel, also constructed of wood and iron, was erected in 1884. Passengers who had to change trains at De Aar and had to wait for connections, stayed at the hotel. As trains did not at first have dining cars, train passengers ate at the hotel and soon the hotel had the reputation as having one of the finest dining rooms outside of Cape Town. The local farming community gradually started conducting their business at De Aar instead of travelling to the older neighbouring towns such as Britstown, Colesberg and Graaff-Reinet. Soon a postal agency, and a branch of the Standard Bank were established, all housed in the same wood and iron shop of the Friedlander Brothers.

Isaac and Wulf Friedlander saw the potential of the area and purchased the farm on which De Aar was established in 1899 for a sum of £11,000. The Rt. Hon. G. Brand van Zyl, who was later the 7th Governor-General of the Union of South Africa and De Aar's first lawyer, signed the deed of sale. 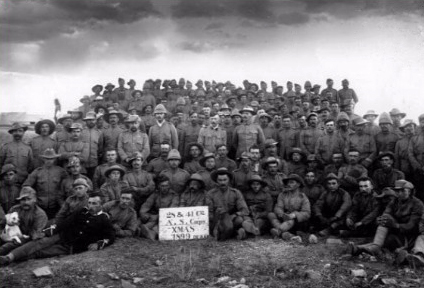 It was the brothers’ initial intention to call their town Friedlanderville, but the name was not well received so it was simply named De Aar after the farm. The brothers developed the town by purchasing additional properties adjacent to the farm until they had accumulated what they deemed to be sufficient land they could subdivide into a township.

The 2nd Anglo Boer War had a significant effect on De Aar particularly given its strategic importance as a major railway junction. Many Colonial and British troops were garrisoned at the town and a military hospital was established for the duration of the conflict. As a safeguard to the Cape Colony the three major railway junctions of Noupoort, Stormberg and De Aar were garrisoned. 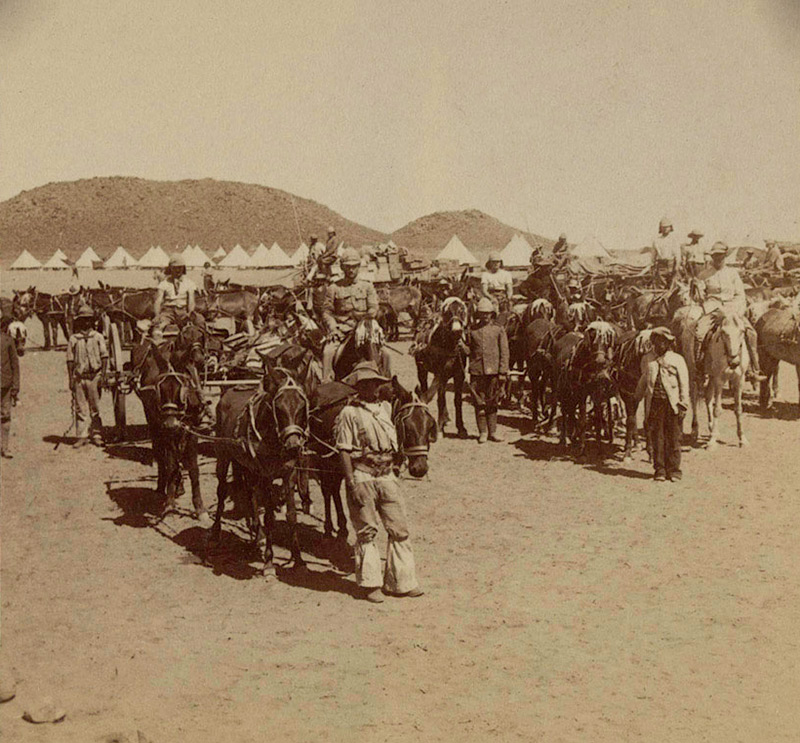 De Aar was garrisoned by the Yorkshire Light Infantry under the command of Lieutenant Colonel Baxter and a local contingent known as the Remington Scouts. The garrison was strengthened considerably as a major military depot by the end of 1899 with the arrival of the 2nd Warwickshire Regiment, the Royal Field Artillery, the 1st Essex Regiment, the 1st Yorkshire Regiment together with two companies of Mounted Infantry all under the command of General Wood of the Royal Engineers. 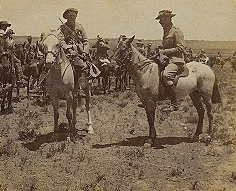 The Remington Scouts at De Aar

On the dining room wall of the De Aar Hotel are emblems of the various British military regiments that were stationed in the town at the time. During the 2nd Anglo Boer war the De Aar Hotel was the headquarters of the British and Colonial military forces in the area. 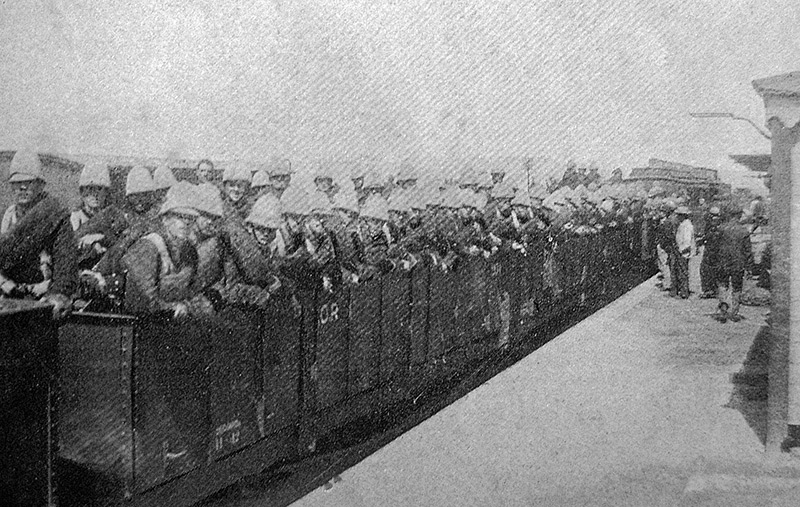 De Aar served as the primary control centre in preparation for Lord Paul Sanford Methuen’s attack on the Boer forces at Magersfontein, south of Kimberley, as well as Field Marshall Lord Frederick Robert’s advance on Bloemfontein in January 1900. 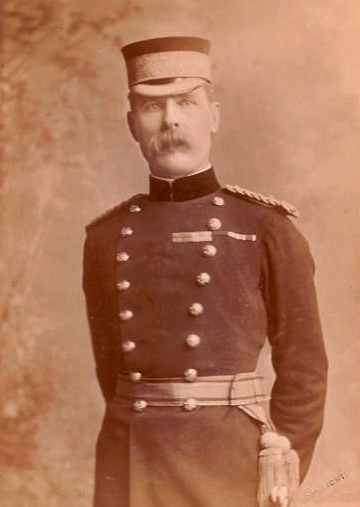 Thousands of British and Colonial troops were deployed together with guns, military supplies and transport wagons north of the Orange River towards Kimberley.

Large reserves of rations and medical supplies were also stockpiled at De Aar in preparation for the British advance. 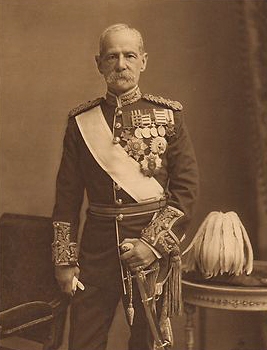 The official British mobile headquarters train was despatched to De Aar on 6 February 1900, but without Lord Roberts or his Chief-of-Staff, Field Marshall Lord Horatio Kitchener, on board due to fears of sabotage. On 9 February 1900 Lord Roberts visited De Aar and the De Aar Army Hospital. This was one of the large Army facilities that gained such a terrible reputation during the War. It was adjudged to be in very poor condition as were many of the other medical facilities in the region. 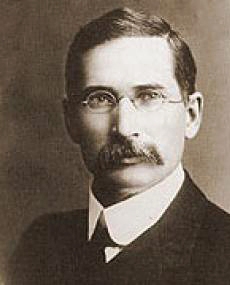 In mid-December 1900 General J.B.M Hertzog crossed the Orange River into the Cape Colony seventy kilometres north of De Aar ensuring that the town was placed on high alert in response. 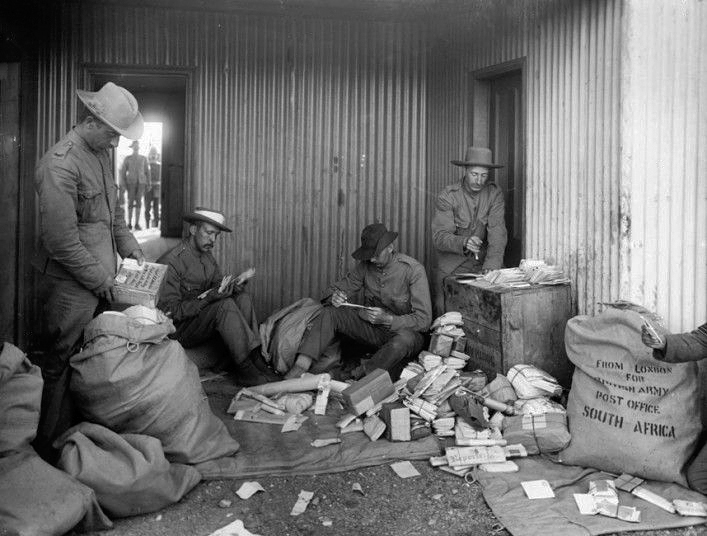 Hertzog’s commando then attacked an armoured train at Houtkraal just to the north of De Aar before engaging and overwhelming four companies of Yeomanry that had been despatched from De Aar to oppose them. 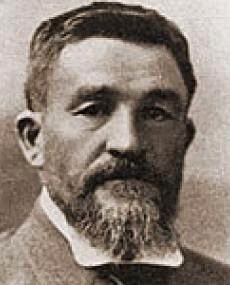 This raid was followed in January 1901 by a Commando under the command of General Christiaan de Wet that crossed into the Cape Colony to the east of Philipstown launching lightning raids and skirmishes with Colonial forces before crossing back into the Orange Free State. Hertzog also continued with Commando activities in the vicinity of De Aar at the same time. 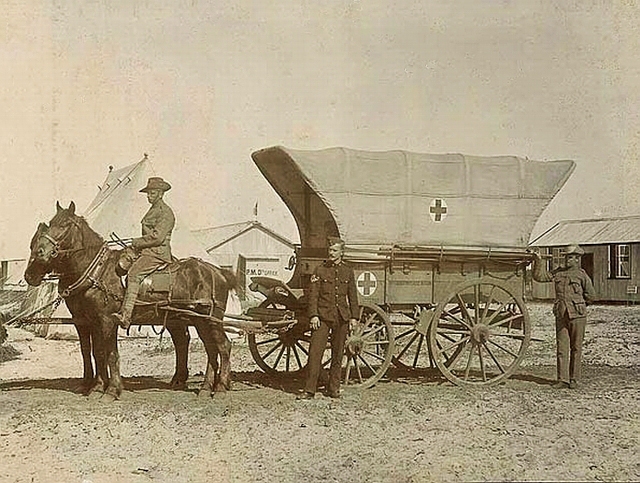 The railway station at Deelfontein south of De Aar was chosen as the site for the Imperial Yeomanry Hospital for the treatment of British casualties due to its links by rail to De Aar and south to Beaufort West, and its healthy dry climate.

The hospital had a capacity for 800 patients housed mainly in prefabricated huts and tents. Alfred Downing Fripp was the hospital’s Chief Medical Officer. 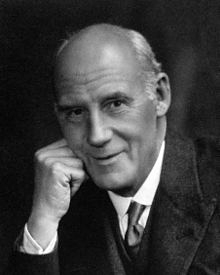 Fripp was later surgeon to both King Edward VII and King George V and a very successful fund raiser for Guy’s Hospital in London and many other medical charities. Deelfontein hospital was a pioneer in the use of X-ray for the diagnosis of injuries. 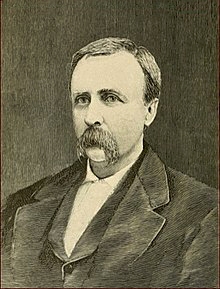 The radiographer in charge, Major John Hall-Edwards, achieved pre-eminence in this field although he lost his arm by not observing safety procedures with the use of x-ray machinery. Little remains of the hospital complex besides a cemetery with some 130 graves and the remains of the Yeomanry Hotel, built after the war to accommodate soldiers' relatives visiting the site. 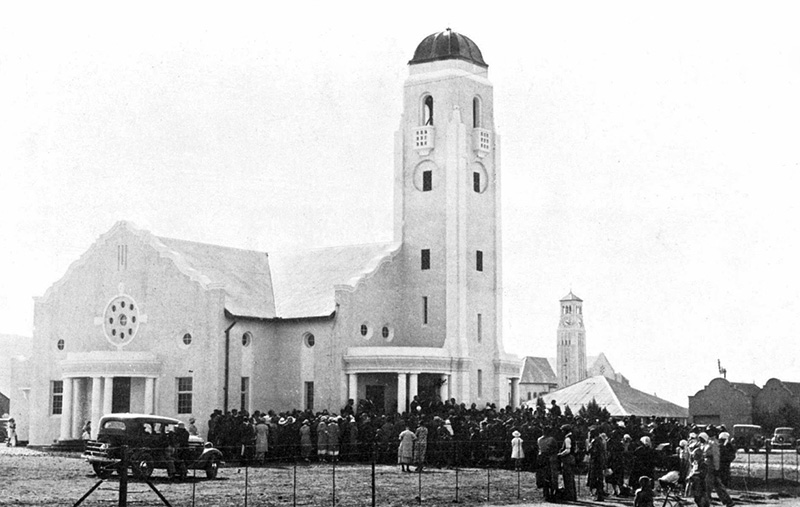 Consecration of the Gereformeerde Kerk in De Aar

With the end of the 2nd Anglo Boer War in 1902 the Friedlander brothers hired a surveyor from Cape Town to lay out plots, not only for private homes, but for all kinds of public buildings such as schools, a market, hospital, sports grounds, the City Hall and municipal buildings, a court building and business plots. All religious denominations received their plots free of charge together with several more plots to sell in order to raise funds to erect buildings. Their town plans made provision for wide streets and broad pavements and areas set aside for the Coloured and African populations. By the end of December 1902 the auctioning of plots began and went on for a fort¬night. The town was beautifully laid out at a time when town planning was not a well-established science. 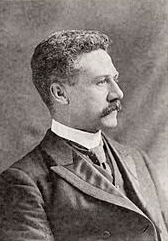 In 1903 the municipality of De Aar was established with Samuel Cronwright, the husband of writer Olive Schreiner, installed as Town Clerk, until 1912 when Hendrik Hanekom took his place. Olive Schreiner and Samuel Cronwright’s house in De Aar is today both a museum and restaurant. The town’s first Mayor, Dr Harry Baker was elected in 1907. 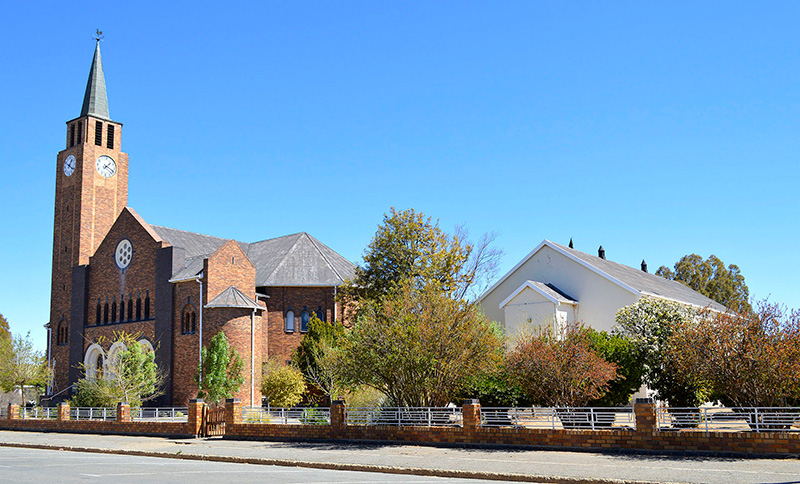 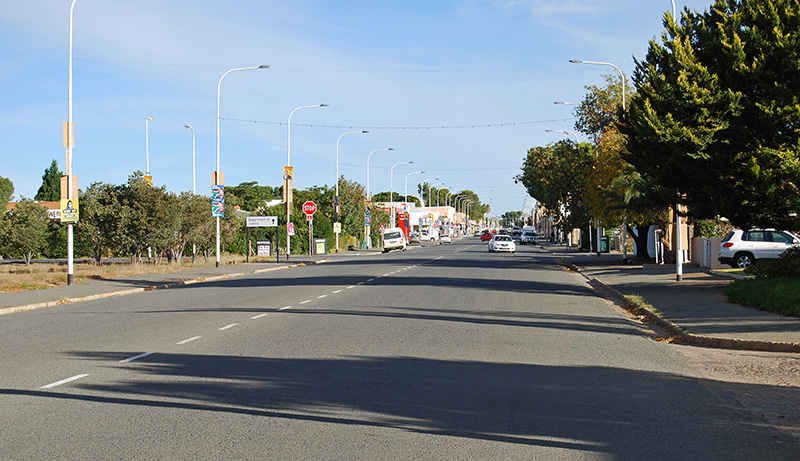