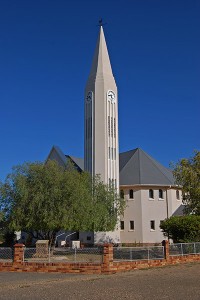 Situated at the edge of the Hantam Karoo, Bushmanland and Namaqualand, Loeriesfontein is an isolated yet atmospheric village situated in a fold of hills on the northern slopes of the Skurweberg. The town grew around a trading store established in 1894, however given its isolation grew very slowly and was only declared a municipality in 1958.

The town subsequently lost its municipal status when it was incorporated into the Hantam Municipality together with Calvinia and Nieuwoudtville. Loeriesfontein boasts an impressive Dutch Reformed Church built in the Art Deco style of the 1930s.

The village forms part of the spring flower spectacle centred on Nieuwoudtville and attracts many visitors during the flowering season which runs from late July through to the end of September. Situated some 1 000 metres above sea level the village is cool to warm during the winter months and can become very hot during the summer months. 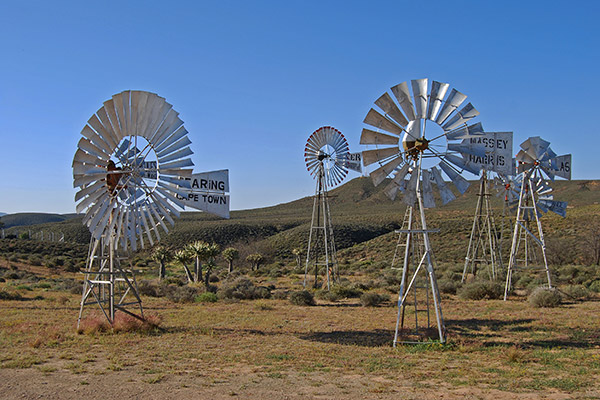 The Windpump Museum situated in the grounds of the Fred Turner museum is probably Loeriesfontein’s most well-known tourism attraction and features a collection of 27 working windpumps originating from afar afield as the United States and Canada. Wandering around the display of windpumps one is struck by their intricate construction and the size of the individual blades designed to catch even the lightest of breezes. 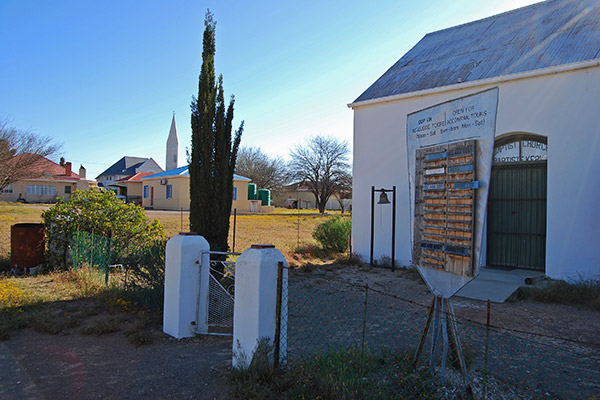 The idea behind the Windpump Museum came from the late Dr Walton, a resident of Cape Town, who was born in the United Kingdom. His interest in the conservation of the windpumps of South Africa led to the establishment of this most unusual exhibit in the grounds of the Fred Turner Museum in Loeriesfontein. Other known windmill museums are in Alberta, Canada and Texas and Oklahoma in the United States. 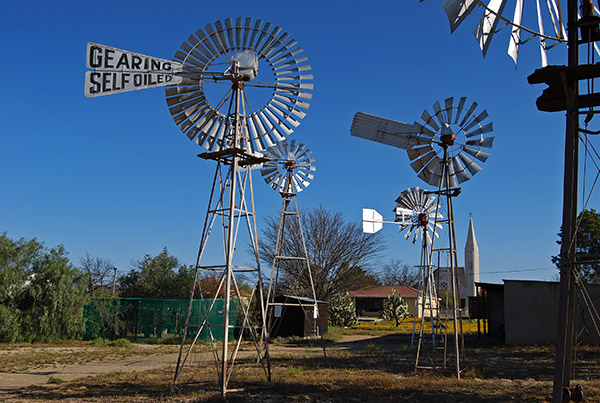 Loeriesfontein wind pump museum with the NG Kerk in the background

The Fred Turner Museum and the Windpump Museum are open during the flower season and at any other time during the year you can contact a list of local residents whose contact telephone numbers are on display outside the museum, who will open up the museum by request.

The Fred Turner Folk and Culture Museum itself celebrates the history of Loeriesfontein and its people. The collection is housed in the old Baptist Church adjacent to the windmill display.

More than 1 000 items are on display, including a trek wagon, equipped tent, a horse mill and smaller items such as kitchenware, photographs, clothes and tools.