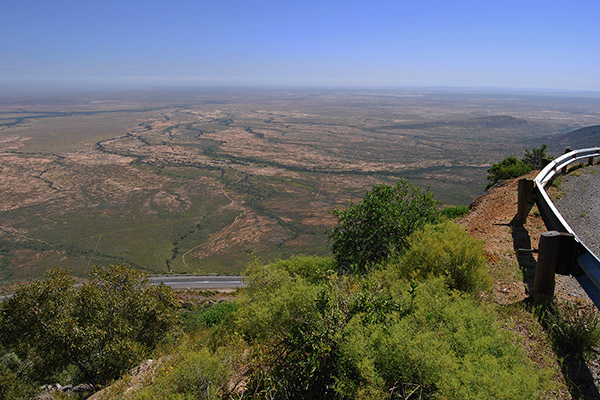 The great diversity of wild flowers that occurs on the Bokkeveld Plateau is the great attraction of this small and sparsely laid out village close to the Bokkeveld Escarpment that drops down onto the coastal plains of the Knersvlakte towards Vanrhynsdorp and Vredendal. 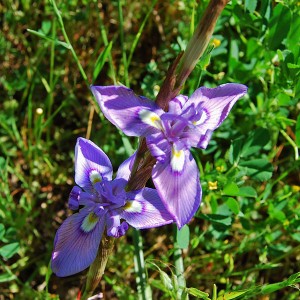 The diversity of flowers in Nieuwoudtville can largely be attributed to the variety of soils that occurs in the area and the climatic conditions and there are no less than 309 species of flowering bulbs to be found in the immediate vicinity of Nieuwoudtville.

During flower season it is imperative that you do not rush around but rather spend time examining in detail the variety of wildflowers growing around where you stand. In certain areas there can be more than 50 species within one square metre and the colour variety is simply spectacular to see. Nieuwoudtville is truly a biodiversity hot spot and very popular during the spring flowering which follows the rains from July up until the end of September.

Although the most popular flowering season to visit Nieuwoudtville is during spring, late summer rains into autumn can bring out swathes of flowers particularly the candelabra-like Brunsvigia Bosmaniae that carpets the ground in a mantle of pink. 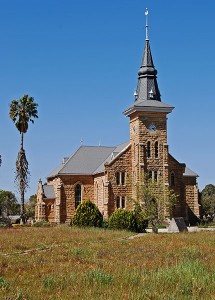 Nieuwoudtville Dutch Reformed Church
in a meadow of wild flowers

Up to date information on the flower season can be obtained by phoning the Nieuwoudtville Publicity Association on telephone +27 (0)27 218-1336 or emailing info@nieuwoudtville.com 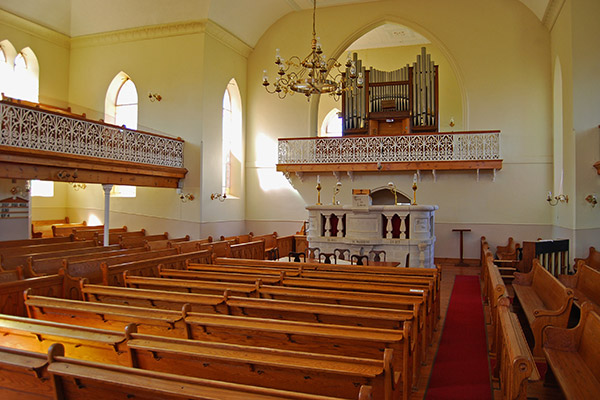 Nieuwoudtville itself features a variety of beautiful sand stone houses dating from the early 20th century. The impressive neo Gothic style Dutch Reformed Church is located in an expansive field of natural vegetation and is surrounded by a profusion of brightly coloured wildflowers during the flowering season.

The foundation stone for the church was laid in 1906 and the church is now a national monument.

There are a number of noteworthy, historic buildings in the village including the rectory, the post office and the adjacent shop, the school and numerous beautiful old stone houses.