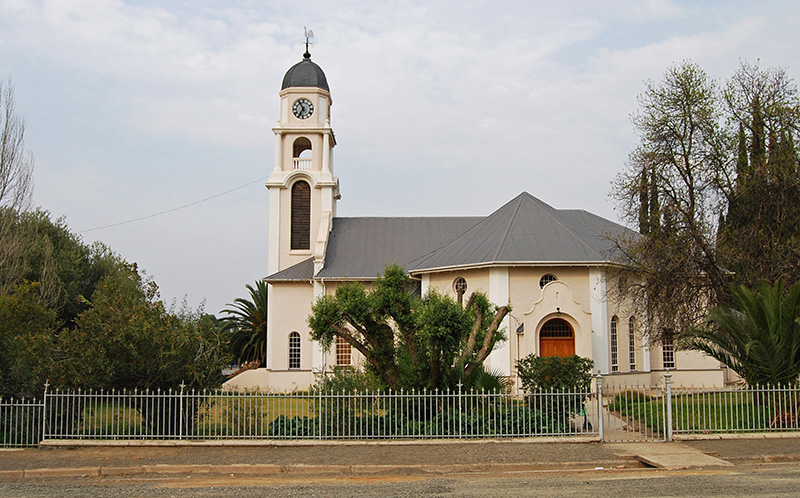 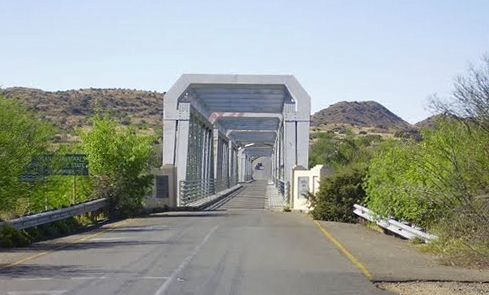 Havenga Bridge over the Orange River 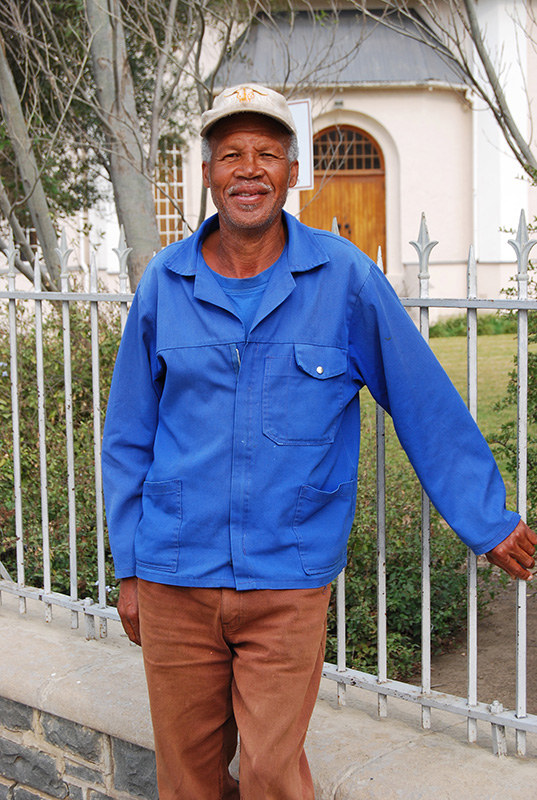 Petrusville is a small village located some 10-kilometres south of the Orange River along the R48 road linking Philipstown to the Vanderkloof Dam and Luckhoff in the southern Free State.

Just to the south of the village the gravel R369 road branches off the R48 leading through pleasant undulating countryside towards Colesberg.

Beyond the R48 turnoff towards Luckhoff the R369 follows the south bank of the Orange River towards Orania and beyond to Hopetown. 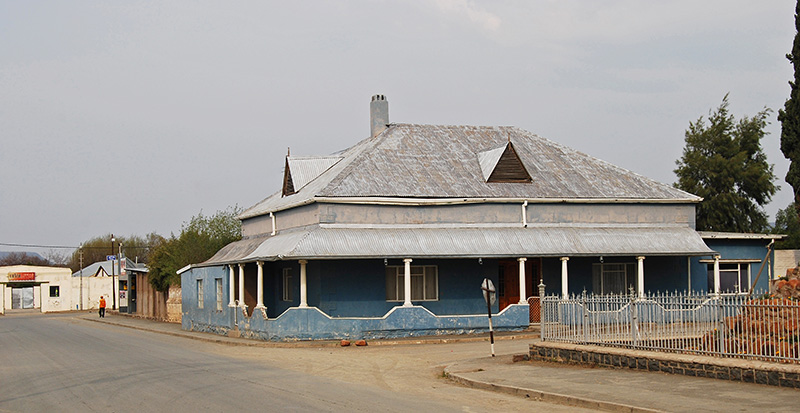 Petrusville was named after Petrus van der Walt, the owner of the farm Rhenosterberg, on whose farm the village was established. The town is surrounded by a cluster of hills and there are a number of stone trenches to be seen in these hills dating from the 2nd Anglo Boer War. 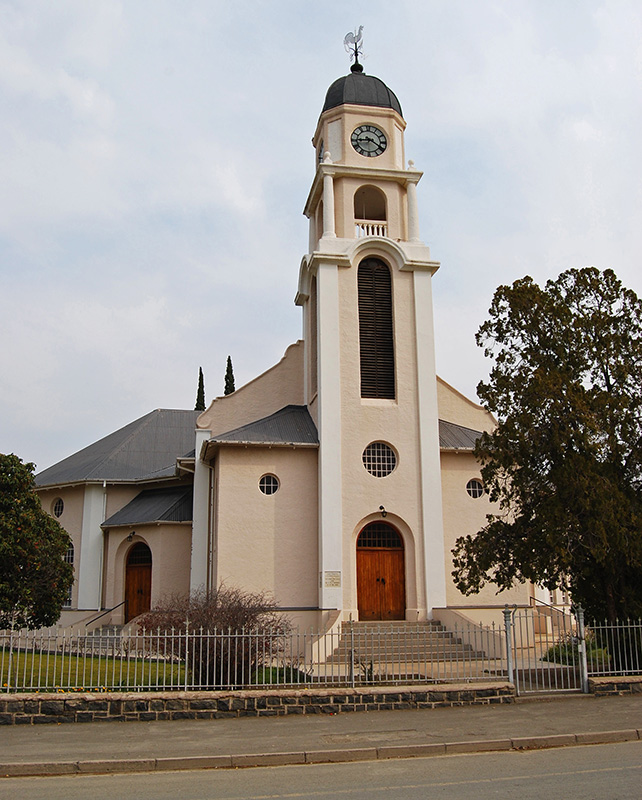 The village serves as a centre for the local agricultural community and farming with livestock especially sheep, predominates in the region.

The local Dutch Reformed Church features a collection of Victorian and Edwardian era clothing and a hooded horse-drawn cart from the nineteenth century. The Pillar Fountain, outside the Church, was erected by the community in honour of King Edward VII in the first decade of the twentieth century. 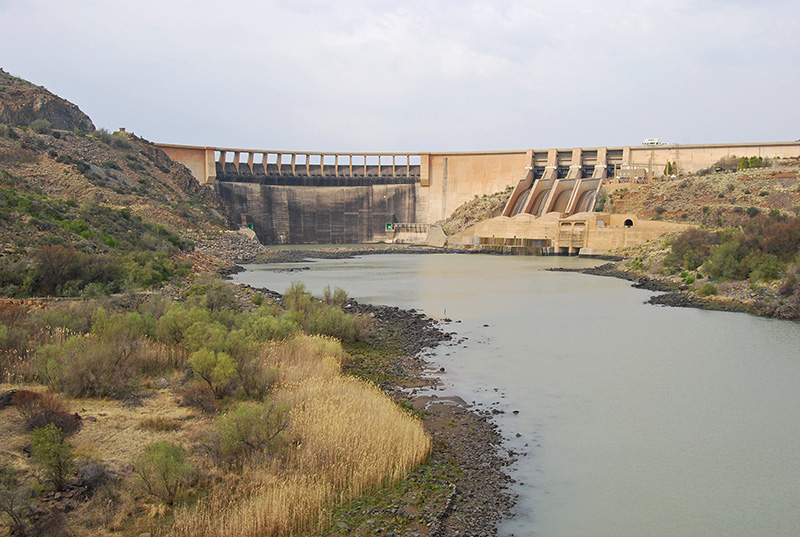 Vanderkloof is located some 10-kilometres from Petrusville on the banks of the Vanderkloof Dam and is a popular holiday and recreation centre, with activities centred on the dam and the adjacent Rolfontein Nature Reserve.

Vanderkloof was established to house the labour force required for the construction of what was originally known as the P.K Le Roux Dam. The dam was named after Pieter Mattheus Kruger Le Roux, generally known as P. K. le Roux, who was a South African National Party politician who served as a Cabinet minister between 1958 and 1968, first as Minister of Water Affairs and Agriculture and later as Minister of the Interior. 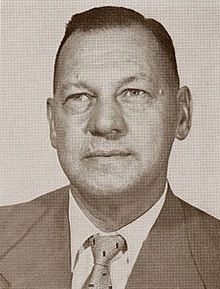 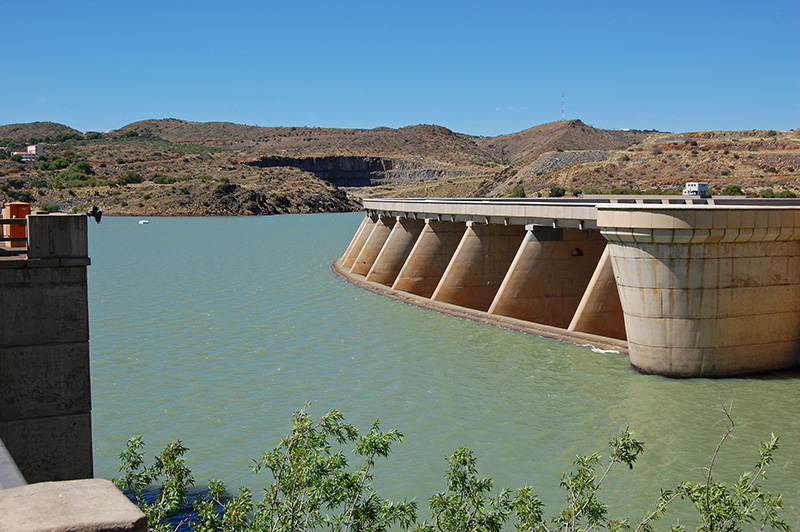 View of the Vanderkloof Dam Wall

The dam was renamed the Vanderkloof Dam after the 1994 transition.

The dam provides irrigation for some 100,000 hectares of productive agricultural land along the banks of the Orange River. 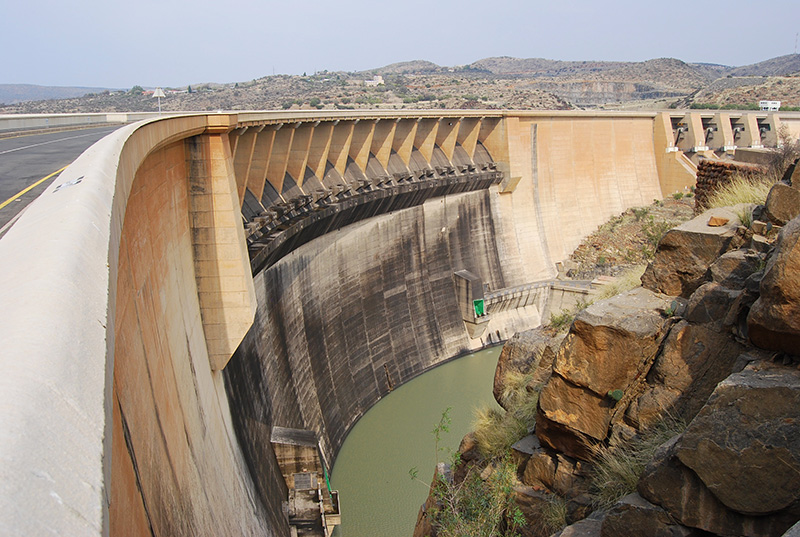 View from the Free State side of the Dam Wall

The Vanderkloof Dam is South Africa’s second biggest dam and is fed by the Orange River forming the boundary between the Northern Cape and Free State Provinces.

The Vanderkloof Dam has the highest dam wall in the country at 108-metres with a crest length of 765-metres. The dam has a capacity of 3,187.557 million cubic metres and a surface area of 133.43 square kilometres when full. 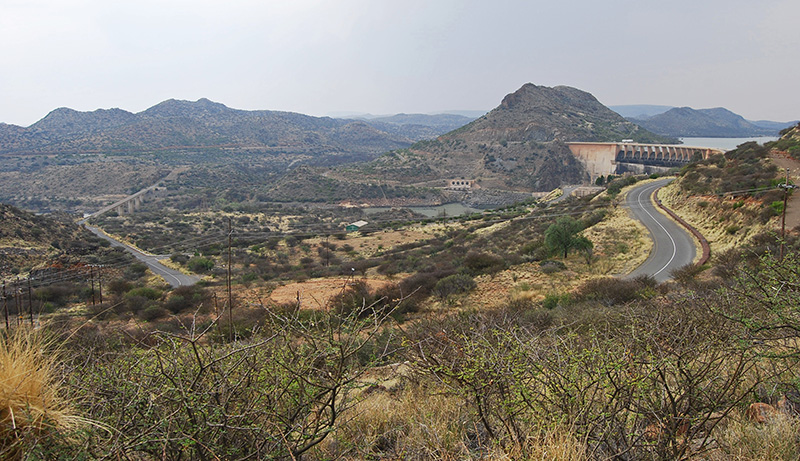 The Dam is the perfect venue for a variety of watersports including sailing, skiing, and windsurfing. Angling for catfish, carp and small and large-mouth yellow fish is permitted with a permit obtainable from the Rolfontein Nature Reserve Office in Vanderkloof.

Tours of the Dam by appointment can be undertaken providing an insight into the history and functioning of the dam and the hydroelectric power station. 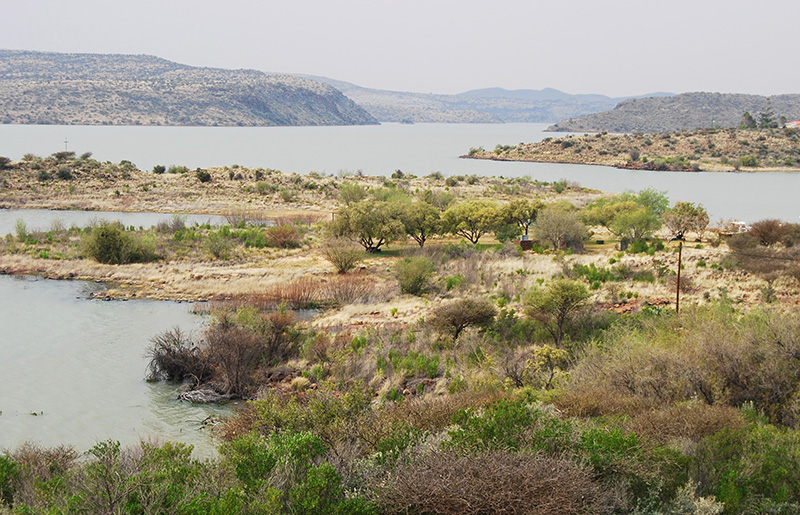 The Rolfontein Nature Reserve straddles the southern shore of the Vanderkloof Dam, immediately adjacent to the Vanderkloof village, and was proclaimed as a nature reserve in 1970. 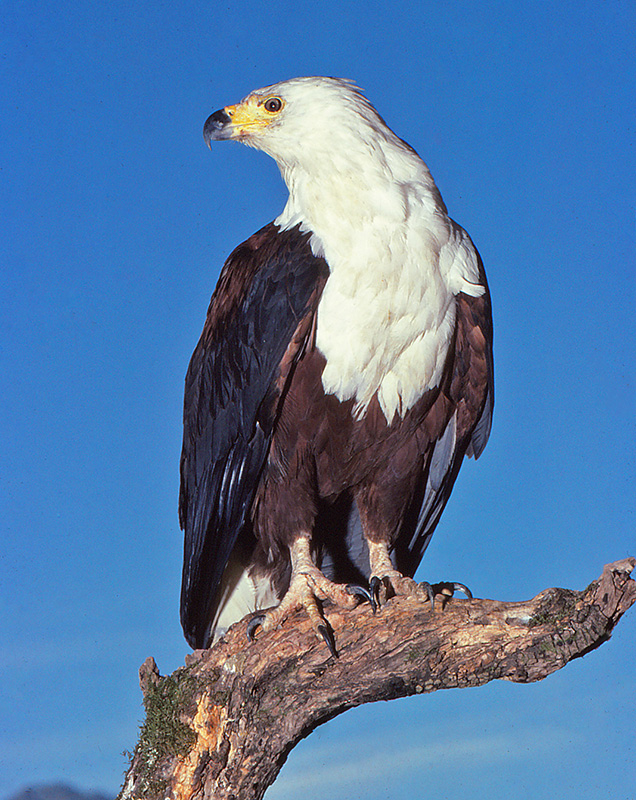 The Mountain kloofs or ravines are mostly densely wooded with wild olives, sweet thorn and karee, whilst cabbage trees, black thorn and camphor bush occur on the rocky ridges providing a varied habitat for the more than 200 species of birds that occur in the reserve, including the African fish eagle. There are 209 plant species that occur within the reserve, of which 44 are grasses. 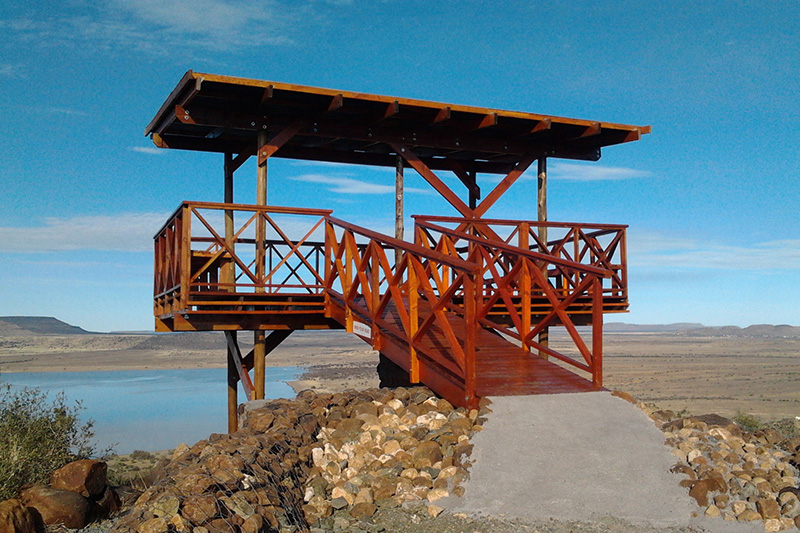 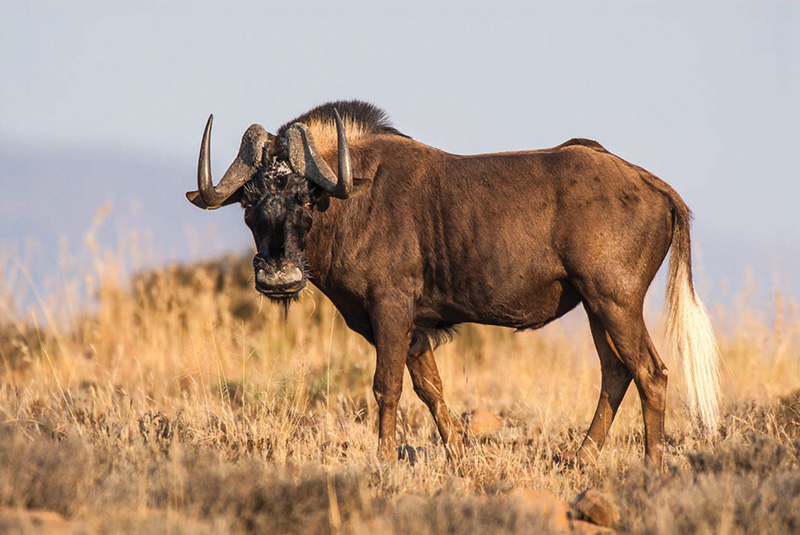 Picnicking is allowed at designated sites throughout the reserve while visitors must provide their own firewood.

The Pied Barbet hiking trail is also recommended and is a two hour, four kilometre walk.

Visitors can also hike anywhere in the reserve making use of overnight hiker’s huts and the basic tented camp.

Some of the roads in the reserve require 4X4 vehicles whilst the remainder of the reserve is accessible by sedan vehicles. 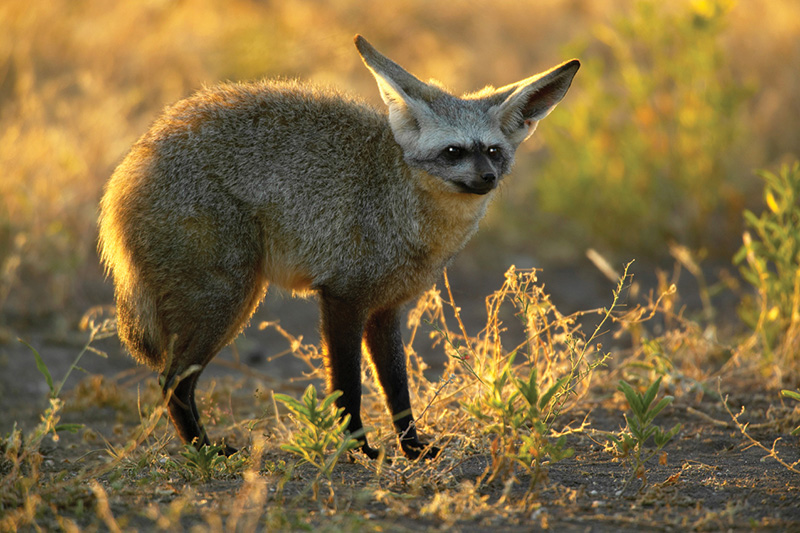