The little village of Vosburg is a surprising and tranquil oasis set in the wide open spaces of the upper Karoo. The early inhabitants of the village showed great foresight in lining the streets with a profusion of trees and the cool tree lined streets provide welcome relief from the relentless heat of the midday sun, particularly in summer when the temperature often rises into the upper forties. The streets are lined with cypress, poplar, carob, beefwood and pepper trees and there is a very pleasing grove of olive trees in the grounds of the stately Dutch Reformed Church.

The village has recently been linked to Carnarvon and Britstown with the newly tarred R384 road and gravel roads link Vosburg with Prieska in the north and Victoria West to the south via the R403. The village is best appreciated by foot and a stroll along the tree-lined streets reveals a rich array of Victorian and Edwardian era homes, mixed in together with some more modern buildings. Some 22 of the buildings in the village have been declared national monuments. 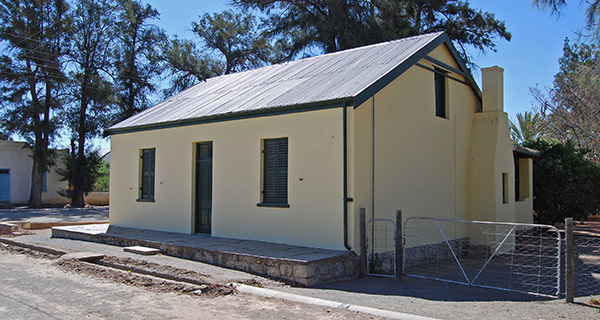 A typical Karoo cottage in Vosburg

The Upper Karoo is occasionally beset by violent thunderstorms during the summer months and it is wonderful to watch the clouds building up with the promise of relief from the intense heat of a summer afternoon. The winter months are characterised by cool, crisp, sunny days and cold nights where the mercury can often fall below freezing.

In common with many other towns across the Karoo sheep farming is the main source of income in the district and the largely pristine environment ensures that Vosburg is a centre for the production of high quality organic lamb and mutton.

The Vosburg Museum is housed in an old Karoo-style house and features a variety of Khoisan implements and interesting exhibits which showcase the lifestyle and history of the early settlers in the district. Fine examples of San rock art can be viewed on the Keurfontein farm in the vicinity of the village, by prior arrangement. 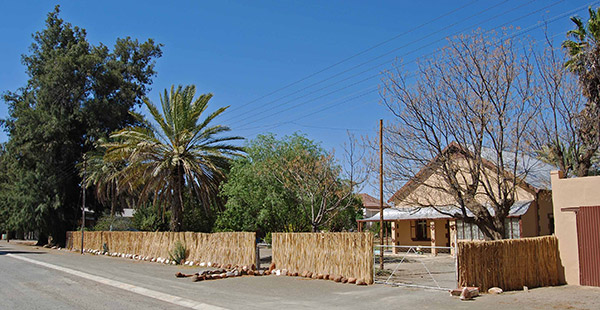 The Karoo is rich in folklore and stories and Vosburg is no exception. In his book Karoo, Lawrence Green relates the story of the incident of the sheep with the golden teeth which plunged the usually quiet and peaceful village into an avaricious fervour of gold fever.

"It seems that the local minister was dining with the farmer. The farmer was about to plunge his fork into the chief dish, a sheep’s head roasted whole, when he noticed something glittering. Probing deeper, he announced that that the teeth were coated with gold. In the excitement the meal was abandoned. Rumours ran around the district. It was argued that the sheep had picked up a covering of alluvial gold while browsing on the veld. Prospectors arrived, gold fever gripped the village and district and property values soared. Soon afterwards came the explanation. "Gold-plated" teeth, announced the experts, were fairly common among Karoo sheep. The glitter was caused by tartar, deposited by the saliva in thin films. It was not gold."