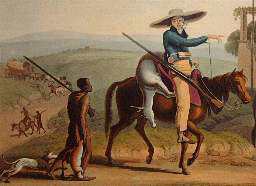 A Trekboer or Nomadic Farmer
in the old Cape Colony

Graaff-Reinet is the fourth oldest town in South Africa and had its origins as a far-flung frontier settlement at the very limits of the old Cape Colony. The first European inhabitants of the area were the trekboere, or nomadic farmers, who moved away from the restrictive rule of the Dutch East India Company at Cape Town in search of suitable grazing for their cattle and fat-tailed sheep. The first permits for establishing farms in the district were awarded in 1770, including the farms Uitkomst (Outcome), Vergenoegd (Far Enough) and Slegtgenoeg (Bad Enough). 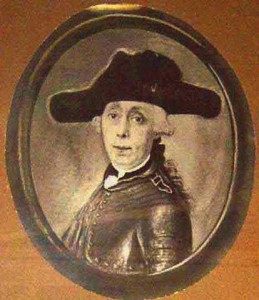 These nomadic farmers first reached the plains of the Camdeboo and the Sneeuberge in the mid-eighteenth century and in answer to a dire need for a settlement to serve their needs Landdrost Mauritz Woeke was despatched to the area from Cape Town. He selected a beautiful site within the broad sweep of the Sundays River and the surrounding mountains in 1786, naming the new settlement Graaff-Reinet after the Dutch Governor Cornelis Jacob van de Graaff and his wife Reynet.

The trekboere had settled the surrounding countryside from the early 1770s and as was common in almost all parts of the Karoo they came into conflict with the indigenous San or Bushmen who had been resident in the area for countless centuries.

The hunter gatherer lifestyle of the San conflicted with the pastoral lifestyle of these early farmers and conflict was the inevitable result. As the San were increasingly deprived of their best hunting land they resorted to killing the farmer’s livestock in order to survive. A state of almost perpetual conflict between these early settlers and the San raged for almost 30-years with more than 3,000 San killed in the conflict. The few survivors from this unfortunate period either moved away into the vast northern spaces of the Great Karoo or were assimilated into the population of the Khoikhoi who worked for the new white settlers. 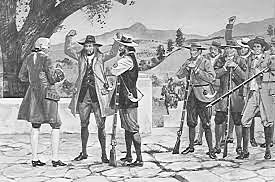 The nomadic farmers and the early settlers were independently minded and deeply disenchanted with any attempt by the distant colonial government in Cape Town to administer their affairs. The Dutch East India Company, the ultimate authority behind the colonial administration, was in an advanced state of decay by the late eighteenth century and gave little thought to the protection of their burghers, or citizens, in the far flung corners of the vast Cape Colony against the marauding San and the Xhosa tribes from the east. In February 1795 the burghers of Graaff-Reinet dismissed Landdrost HC Maynier and his officials and in a flagrant act of rebellion set up their own administration. The British ejected the effete Dutch administration from the Cape at the same time, however the burghers of Graaff-Reinet refused to accept the authority of the new British colonial administration, relenting a few months later. The British authority continued until 1799 when the burghers again rose in revolt freeing Commandant Adriaan van Jaarsveld from prison, who had served as the President of the Graaff-Reinet “War Council.” The rebellion was supressed by General Thomas Vandeleur and the ringleaders including van Jaarsveld and Marthinis Prinsloo were sentenced to death in Cape Town whilst a number of the other rebels were sentenced to terms of imprisonment, banishment or flogging. Van Jaarsveld died in custody in the Castle in Cape Town in 1803.

The independent Republic of Graaff-Reinet ceased to exist reverting under the control of the colonial authorities in Cape Town. During this period the inhabitants of Graaff-Reinet had to contend with repeated cattle raids by Xhosa warriors so depleting their herds that arrangements had to be made to purchase cattle from the Bechuana. 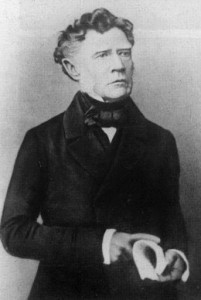 The new village of Graaff-Reinet developed slowly and was none the less pivotal to the development of the surrounding area. Skilled artisans such as wagonwrights, saddlers, blacksmiths, carpenters and builders swelled the population and by the mid nineteenth century the town was the most important settlement on the eastern fringes of the Cape Colony north of Port Elizabeth. Andries Stockenström , later to be appointed Lieutenant Governor of the Eastern Province, was instrumental in cutting the first water furrows round the steep mountain buttress feeding water upstream from the Sundays River into the large garden plots that were a feature of early Graaff-Reinet. 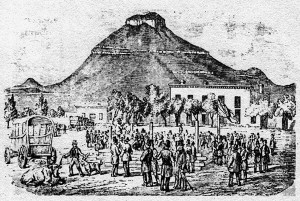 Sale of Angora Goats in Graaff-Reinet in 1857

This transformed this rather dusty, arid and somewhat tatty settlement into a veritable Eden of intensive agriculture with the planting of many fruit trees and other crops in the town.

Graaff-Reinet played an important role during the Great Trek that reached its zenith during the period 1834 to 1837. Fed up with British colonial rule in the Cape Colony and deeply resentful of the intrusion of British influences, including the abolition of slavery in 1834, many burghers decided to trek north into the hitherto largely unexplored vastness of the South African interior beyond the boundaries of the Cape Colony.

Prominent Boer leaders of the Great Trek including Sarel Cilliers, Gerrit Maritz and Andries Pretorius farmed in the Graaff-Reinet district before leading many local followers into the largely unknown territory beyond the Orange River. 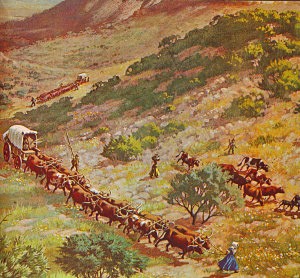 Street scene in Graaff-Reinet of the 1870s

During the 1840s many English settlers arrived in the Camdeboo moving away from the endless conflict with the Xhosa along the eastern boundary of the Cape Colony. These new arrivals established prosperous enterprises in Graaff-Reinet and also firmly established the district as one of the premier wool producing regions in South Africa. The Camdeboo prospered on the back of the wool industry and land prices increased particularly during the 1850s. 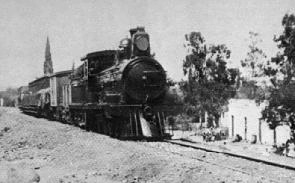 The Railway reaches Graaff-Reinet in 1879

The advent of the Anglo Boer War in 1899 and the invasion of the Cape Colony by Boer Republican Commandos did not result in widespread rebellion by the Cape Afrikaners against the Cape Colonial Government. 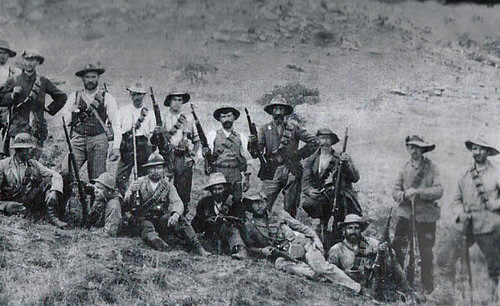 Although there was widespread sympathy amongst Cape Afrikaners for the Boer Republics very few Afrikaners from Graaff-Reinet joined up with the Republican Commandos. There was greater direct support for the commandos from the smaller towns of Colesberg, Aliwal North, Jamestown, Venterstad, Aberdeen and Lady Grey. There was however considerable tension between English and Dutch speaking members of the community in Graaff-Reinet that threatened to spill over at any moment into open hostility. In March 1900, 350 Officers and Men of the Sherwood Foresters of the Derbyshire Regiment arrived in Graaff-Reinet and despite the overt hostility of many of the Dutch speaking residents of the town they were treated typically with great hospitality. 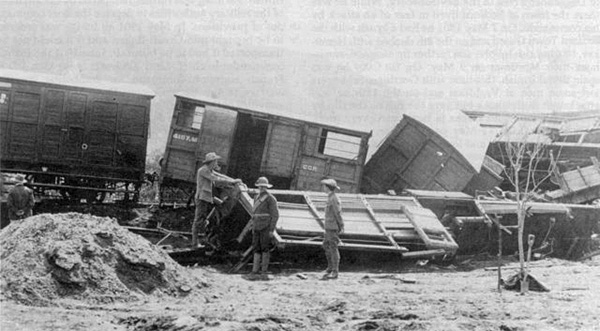 Sabotage of the railways by Boer Commandos

A second invasion of the Cape Colony from December 1900 differed from the first in that the Boer commandos were highly mobile and almost never occupied a town, but rather spent their time harassing the British with lightning raids on supply columns, burning farmsteads, blowing up trains and railway infrastructure and taking what they needed on the move. The maze of mountains to the north and east of Graaff-Reinet were often used as a place of refuge when the pursuit actions of the British threatened to overwhelm the Commandos. 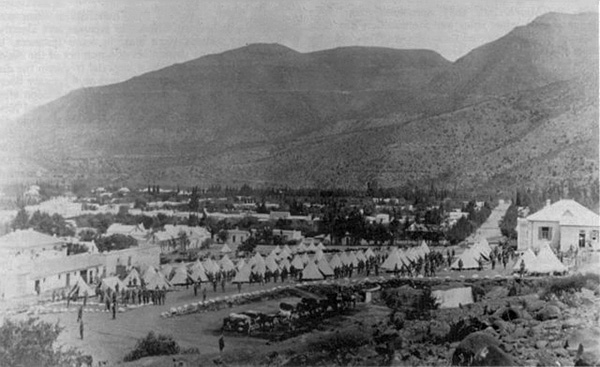 Coldstream Guards Encampment in Graaff-Reinet in 1901

Various Commandos under the command of Commandants Scheepers, Kritzinger, Fouche, Malan, Lategan and Naude fanned out across the Cape Midlands with the express purpose of disrupting the British war effort and at the end of 1900 Graaff-Reinet was threatened with occupation by Commandant Kritzinger. Kritzinger occupied Nieu Bethesda in the mountains to the north of Graaff-Reinet with his Commando of 400 fighting men. However the arrival of 600 men of the Coldstream Guards on 31 December 1900 in Graaff-Reinet and the arrival of a further 1,400 British troops by 7 January 1901 thwarted any plans of occupation that Kritzinger may have had. 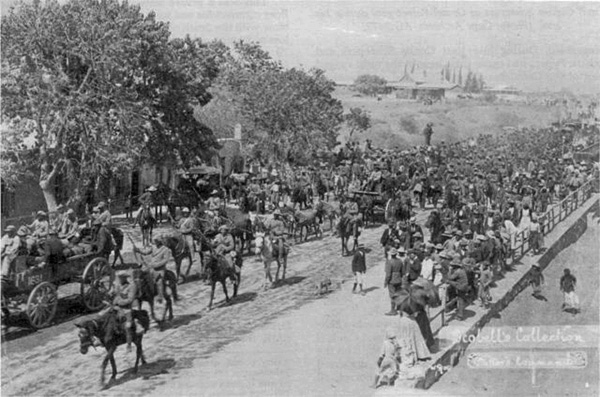 A loyal town guard was formed with 100 men under the command of Commandant J Gardner with Captain F Rubidge as Adjutant. Their numbers increased to 220 by March 1902. 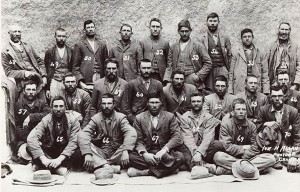 The Town Guard freed up the British troops to take on the Boer Commandos in the district and between January and June 1901 there were a number of skirmishes between the British troops and the Commandos near Nieu Bethesda, Murraysburg, Aberdeen and Jansenville. Farming activity in the district was severely disrupted and in a desperate attempt to deprive the Boer Commandos of provisions a martial law notice issued in May 1901 decreed that “all forage including lucerne, hay, oathay, chaff, wheat, rye or barley, dried, in bundles is to be brought in Graaff-Reinet at once.”

All remaining commodities on the farms were to be destroyed. Those town councillors suspected of sympathies towards the Boer Republics experienced difficulties and by July three of these troublesome individuals were relocated to Port Alfred as undesirables. 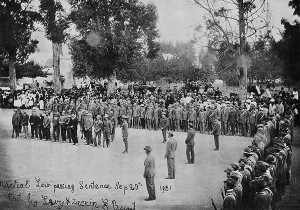 Cape Rebels sentenced to death in Graaff-Reinet
in September 1901 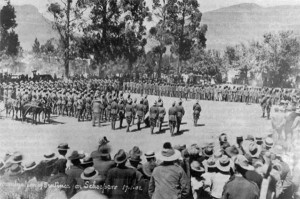 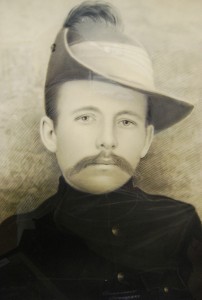 Graaff-Reinet was also witness to the trial of many of the Cape Rebels – those citizens of the Cape Colony that had taken up arms against the British. From April 1901 a number of Cape Rebels were put on trial on charges of High treason and many were sentenced to death with their executions taking place at different towns and villages across the Colony. Eight of these rebels were executed in Graaff-Reinet.

Included in this number was Commandant Gideon Scheepers who was captured near Prince Albert and who was found guilty on a charge of war crimes. On 2 December 1908 the bodies of seven of the men executed at Graaff-Reinet were laid to rest, the service of commemoration attended by 2,600 people. The remains of Gideon Scheepers were never found. The Anglo Boer memorial on the corner of Somerset and Donkin Streets was unveiled in 1908 and celebrates the lives of the eight men executed as traitors in the dying days of the war. 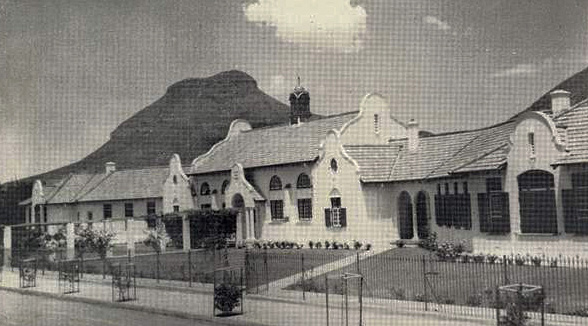 After the conclusion of the second Anglo Boer War Graaff-Reinet continued to develop becoming an important centre for education in the surrounding district. In 1920 Union High School opened its doors as an independent English Church school whilst the Hoer Volkskool was established in 1922 as the first Afrikaans language school in the old Cape Province. An important milestone in the development of Graaff-Reinet was the construction of the Van Ryneveld Dam which was completed in 1925. Graaff-Reinet received its first regular supply of tap water following the construction of the dam. 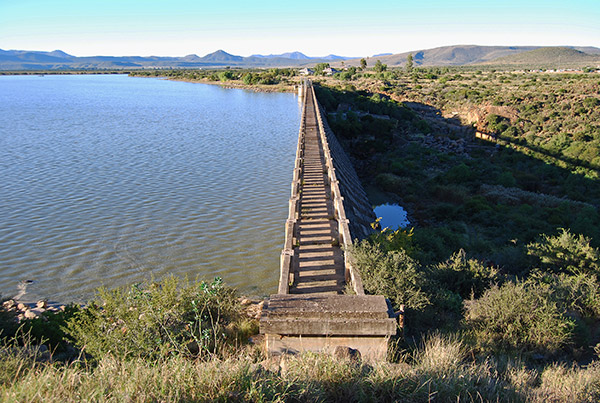 Construction of Van Ryneveld Dam was completed in 1925

During the Second World War the men of the Middellandse or Midlands Regiment of Graaff-Reinet were amongst the 30,000 British and Commonwealth Troops captured by German Field Marshall Erwin Rommel at Tobruk in Libya in 1942. The Regiment was absorbed into the Rand Light Infantry after the Battle of Al Alamein as most of its members had been captured. 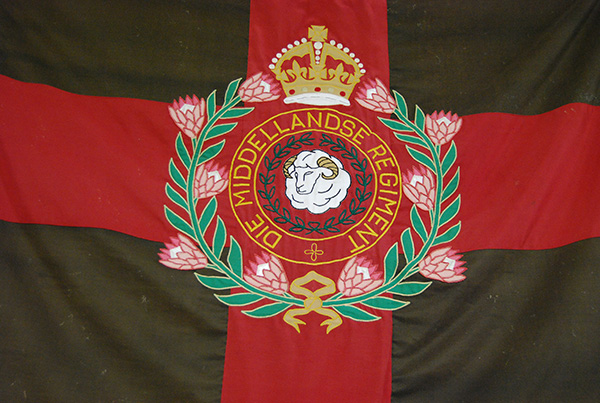 Standard of the Midlands Regiment

Between 1965 and 1981 Dr Anton Rupert contributed significantly to the culture and heritage of Graaff-Reinet by actively supporting the restoration of many of the town’s most significant and important homesteads and buildings. His enormous contribution to the town has resulted in the development of Graaff-Reinet as one of South Africa’s most significant cultural and heritage centres with more than 220 listed national monuments. 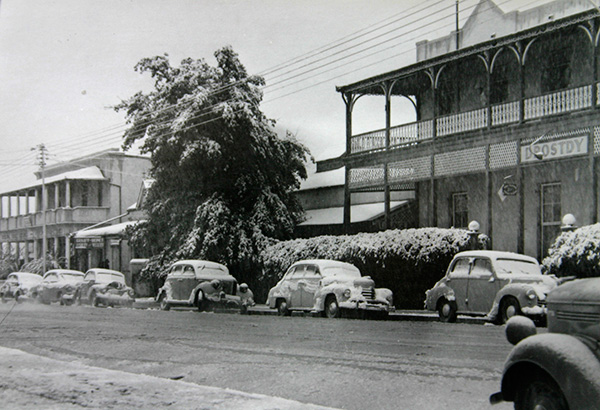