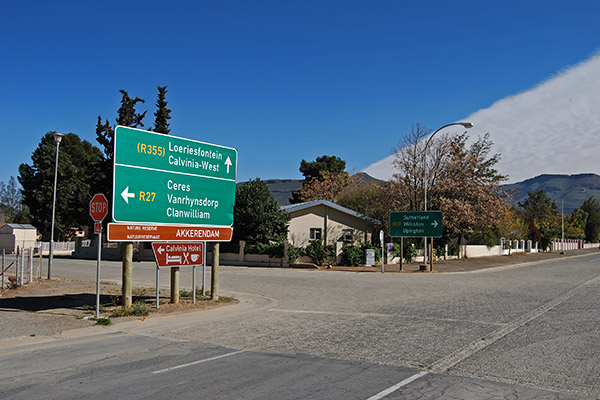 Just north of the town the 2750-hectare Akkerendam Nature Reserve provides access to the Karee Dam and the mountain slopes of the spectacular Hantam Mountains.

Ranging in elevation from 1050-metres above sea level to the peak of the Hantam Mountain at 1669-metres the Reserve was proclaimed in 1962 making it the oldest proclaimed Nature Reserve in the Northern Cape. The Reserve is an important catchment for Calvinia’s drinking water and the flat-topped mountain and vertical cliffs form a striking backdrop to the town nestled on its lower slopes. The Reserve provides picnic sites for day visitors, walking and hiking trails, interesting Karoo birding opportunities and mountain biking on the jeep tracks. Permits to visit the reserve are available from the Hantam Municipality Offices at 29 Hoop Street in Calvinia, or telephone +27 (0)27 341-8500. 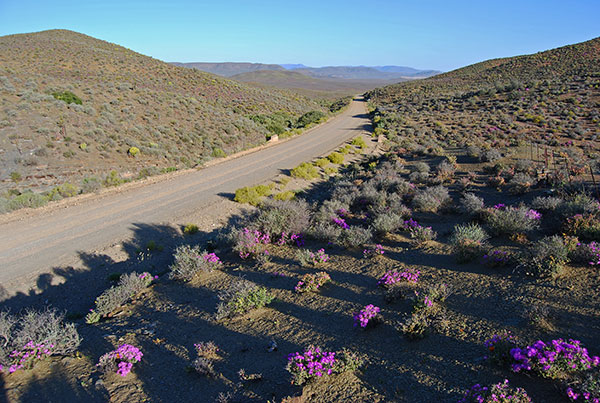 The Agter (behind) Hantam Route circles the Hantam Mountains to the north of the town, an area characterised by rugged scenery and red ironstone hills. Sixteen kilometres from Calvinia towards Williston a gravel road branches north off the R27 and leads through the Moordenaarspoort (murderer’s ravine) to a four-way intersection near the Klipwerf (stone bank) Farm. The right hand turn leads north into the vast plains of Bushmanland towards Brandvlei and Pofadder. Turning left and keeping the bulk of the Hantam Mountains on your left hand side the road passes between the 1503-metre high Toringkop (tower head) and the north western section of the Hantam Mountains before joining the R355 from Loeriesfontein, 20-kilomtres from Calvinia. The circular route is approximately 130 kilometres in length.

An alternative day trip is to travel up the R355 towards Loeriesfontein. Approximately 34-kilometres from Calvinia a gravel road branches off westwards towards Naresie and Gannabos and the kokerboom or quiver tree forest close to the R357 between Loeriesfontein and Nieuwoudtville. From this point it is possible to join the R357 towards Nieuwoudtville. 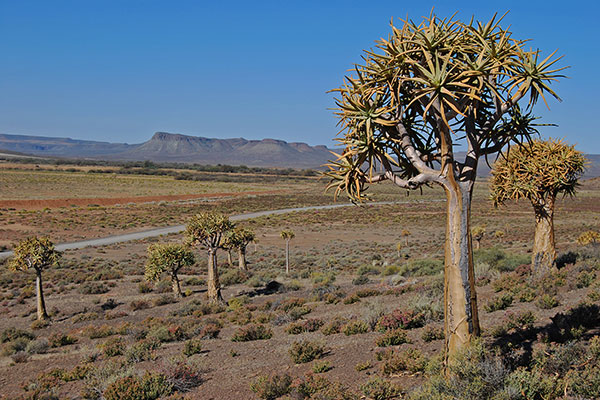 Continuing past the junction to Naresie and Gannabos the R355 continues for a further 39-kilometres to Loeriesfontein. In Loeriesfontein be sure to stop off at the Fred Turner Museum and the Windpump Museum. The Windpump museum is probably Loeriesfontein’s most well-known tourism attraction and features a collection of 27 working windpumps. The Fred Turner Folk and Culture Museum itself celebrates the history of Loeriesfontein and its people. The collection is housed in the old Baptist Church adjacent to the windmill display. More than 1 000 items are on display, including a trek wagon, equipped tent, a horse mill and smaller items such as kitchenware, photographs, clothes and tools. 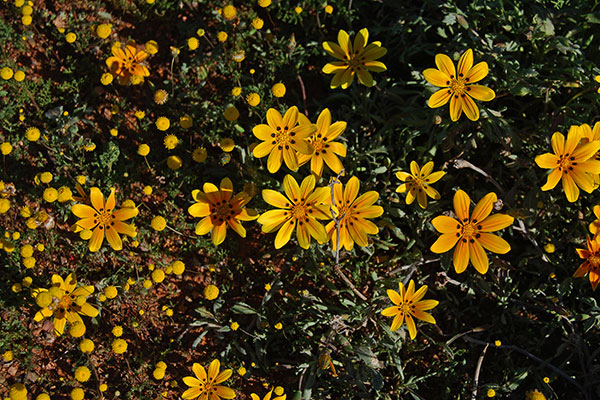 Wildflowers in the Hantam

Seven kilometres from the waterfall the R355 meets the R27 at Nieuwoudtville. Be sure to visit the atmospheric Dutch Reformed Church in Nieuwoudtville constructed from dressed sandstone and the Nieuwoudtville Wild Flower Reserve, particularly if it is flower season between mid-July and the end of September.

The Oorlogskloof Nature Reserve and the VanRhyns Pass, 6-kilometres west of Nieuwoudtville on the R27, are also worth a visit. Return to Calvinia from Nieuwoudtville along the R27.

Three-kilometres beyond the R364 turnoff to Clanwilliam via the Pakhuis Pass is a memorial commemorating the last battle of the Anglo Boer War which was fought at this place. The memorial contains a rifle that was used in this last battle.