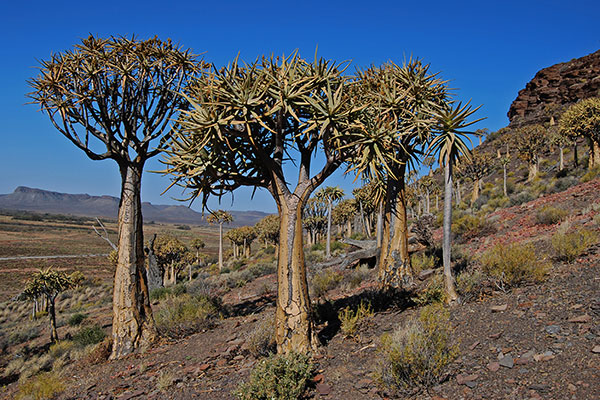 South of Loeriesfontein on the R357 many of the north facing slopes of the hills and mountains are covered in the distinctive Kokerboom or Quiver Tree Aloe dichotoma. This unusual and distinctive aloe is a large succulent plant given its ability to store water in its stem and leaves.

The Kokerboom flowers in winter producing bright yellow flowers which attracts a host of nectar loving birds including sunbirds and pied barbets. Local Nama and Bushman people used the hollowed out soft branches of the Kokerboom as quivers for their arrows, hence its English name.

Some 40 kilometres south of Loeriesfontein on the R357 towards Nieuwoudtville a gravel road branches eastwards accessing a Kokerboom forest, 3-kilometres from the tarred road, where it is possible to walk amongst the Kokerbooms and admire the surrounding landscape of sun-burnt hills and plains stretching away to the stark outline of the Kareeboomsberg. 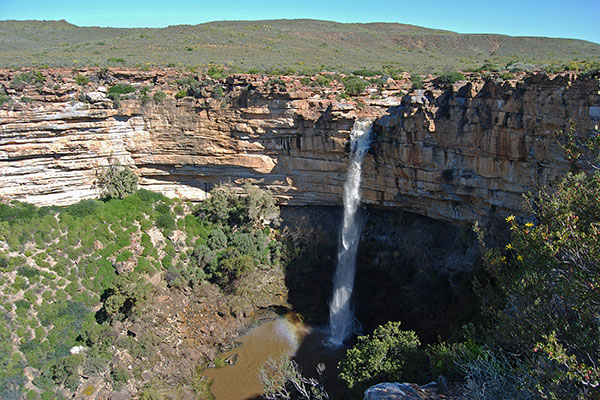 The Nieuwoudtville Waterfall plunges into the Maaierskloof

Further along the R357 approximately 57 kilometres from Loeriesfontein, the Willems and Grass Rivers combine to form the Doring (thorn) River which tumbles over 100-metres into the Maaierskloof and the flow of water during the spring months fed by the spring rains across the Bokkeveld Escarpment provides a fine spectacle. The Nieuwoudtville Waterfall, which is situated some 7-kilometres north of Nieuwoudtville, is a short 100-metre walk from the parking area alongside the R357. 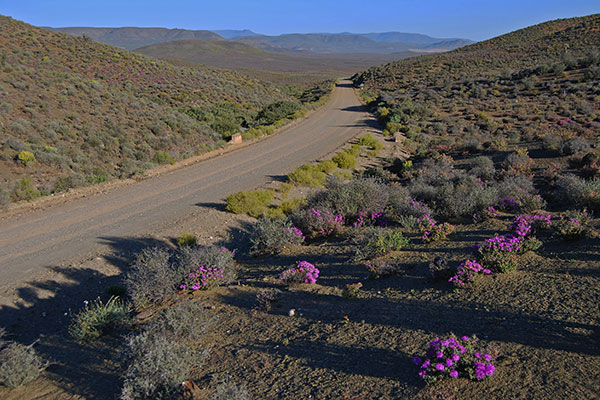 The R355 winds through the hills between Loeriesfontein & Calvinia

The gravel R357 continues north east from Loeriesfontein stretching 121 kilometres across the wide open spaces of Bushmanland towards the distant village of Brandvlei where the road rejoins the R27.

From here the R27 arrows straight across the featureless plains of Bushmanland towards the distant Gariep or Orange River at Keimoes, a further 203 kilometres north of Brandvlei.

South east of Loeriesfontein the gravel R355 traverses the rolling hills and mountains of the Hantam Karoo towards Calvinia. During the spring months wild flowers cover the valleys in shades of yellow and purple and the landscape gradually shifts from rolling hills and valleys to be replaced by the bulk of the Hantam Mountains as the road approaches Calvinia, some 81 kilometres from Loeriesfontein.