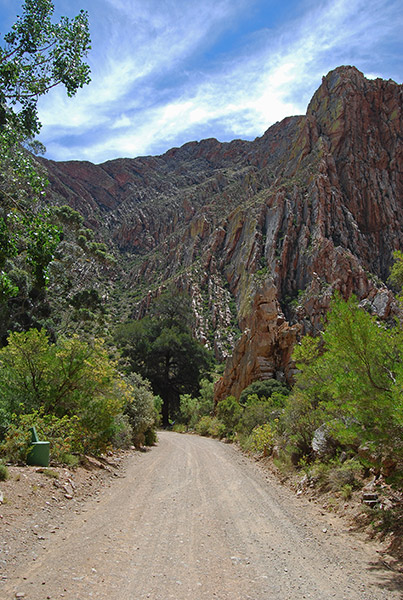 The entrance to the Swartberg Pass from Prince Albert

Overlooked by the Ou Kloof Mountains immediately to the south of the village with the great bulk of the Swartberg or Black Mountains beyond, Prince Albert lies on the southern edge of the Great Karoo with the great open plains of the Koup to the north stretching away for more than one hundred and fifty kilometres to the Nuweveld Mountains in the north. The town lies less than five kilometres from the foot of the Swartberg Mountain Pass that leads over the Swartberg Mountains, via one of the most scenic drives, to Oudtshoorn in the Klein Karoo.

Beyond the gravel road turnoff to the Swartberg Pass the R407 continues along the Prince Albert Valley between the high Swartberg Mountain Range to the south and the more modestly proportioned Ou Kloofberge to the north towards the village of Klaarstroom and the N12 highway. 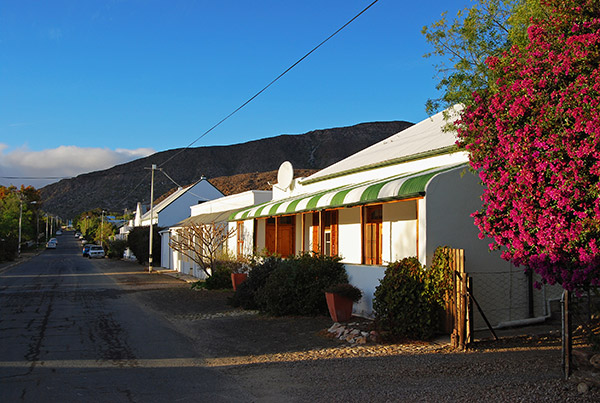 Just outside Prince Albert along the R407 a gravel road branches to the north towards Kruidfontein Railway Station and beyond along the N1 Highway towards Leeu Gamka. Beyond Leeu Gamka the N1 highway continues for 75-kilometres to Beaufort West. From Leeu Gamka the R353 branches off the N1 highway towards distant Fraserburg situated above the high escarpment formed by the Nuweveld Mountains. 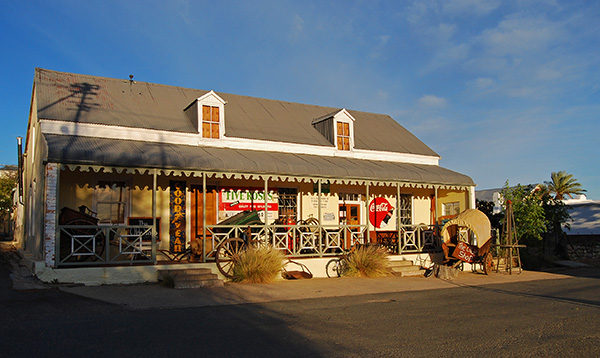 The Olde Shop in Prince Albert

Prince Albert has become one of the most popular destinations in the Great Karoo. Given its beautiful surroundings and the peaceful ambience of the village, it has become an increasingly popular choice for jaded city dwellers looking for somewhere special to put down roots. Over the past twenty years the village has been transformed with many of the old houses lovingly restored and used as holiday retreats and as primary dwellings.

Together with this influx of "inkommers" or new arrivals, a wide variety of restaurants have opened and Prince Albert can justifiably boast its credentials as the gourmet capital of the Great Karoo.

Prince Albert has also attracted a number of renowned artists, potters, sculptors and many other creative people and the village is a centre for the creative arts with galleries and curio shops offering all sorts of locally produced arts and crafts to visitors. 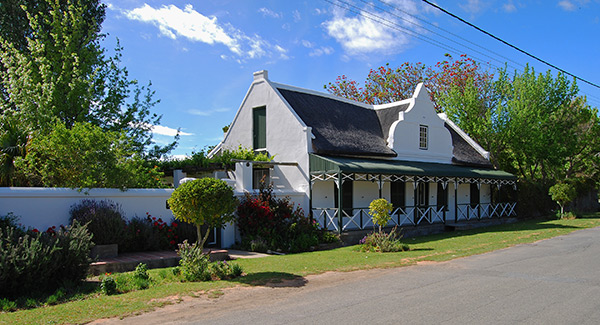 The Gables in De Beer Street

Prince Albert is a great base to indulge all sorts of activities and mountain biking and hiking in the surrounding mountains is very popular.

The succulent Karoo surrounding the village together with the transition to mountain fynbos on the slopes of the Swartberg Mountains ensure that those with an interest in botany can spend many hours discovering the rich and diverse botanic heritage of the area. The "koppie trail", just outside the village, provides the opportunity to experience the local flora with almost 100-species marked for easy reference. 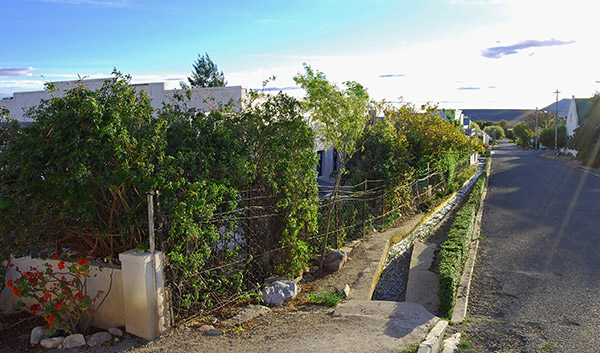 The proximity of both arid Karoo and mountain fynbos provide fantastic opportunities for birding enthusiasts and at night the great splash of the Milky Way across the dark void of the Karoo sky presents spectacular opportunities for star gazing unaffected by light pollution.

Prince Albert has benefitted enormously from the influx of new residents and a renewed sense of commercial purpose. The village is an architectural gem with beautifully preserved Cape Dutch, Karoo, Victorian, Edwardian and Art Deco style together with nineteen National Monuments.

Visitors can enjoy a guided walk around the village or partake in the village’s Red Bus Tour which stops at 25-points of interest around the village. The tour departs Monday to Saturday every day at 11h00 from the Swartberg Hotel in Church Street. Another tour option showcases North End where visitors can experience the culture and lifestyle of the Coloured residents of Prince Albert. The tour starts at what used to be 'Rooikamp' or Red Camp, the site of a Coloured community before the advent of forced removals during the Apartheid era. Visitors can hear some of the stories of this time. Armed with a bit of the historical context the tour continues to North End where visitors will experience churches, a primary school, houses shops and taverns before enjoying a traditional roosterkoek or traditional bread baked over a fire. 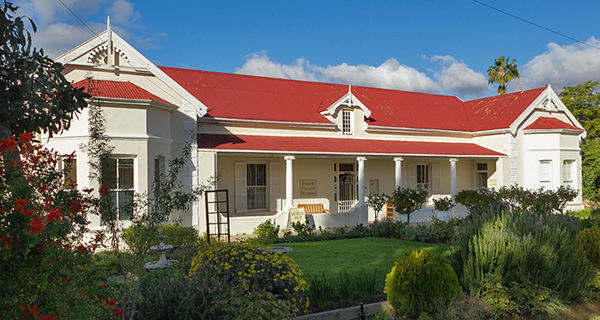 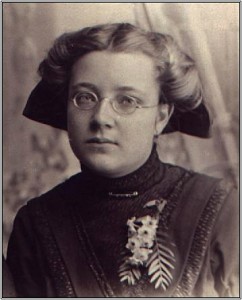 The Fransie Pienaar Museum provides a wealth of information and history of the local community and the village with many of the antiques and artefacts collected by Fransie Pienaar, the founder and first curator of the museum.

The museum includes exhibits ranging from information about Prince Albert, the consort of Queen Victoria, together with a book of his speeches presented to the village by Queen Victoria. The exhibits include a collection of musical instruments, glassware, porcelain and paintings, a gunroom showcasing a collection of firearms, a collection of Victorian-era clothing and needlework and an exhibit featuring the construction of the Swartberg Mountain Pass and the history of Gamkaskloof and Meiringspoort and the little-known local 1890’s gold rush amongst others. 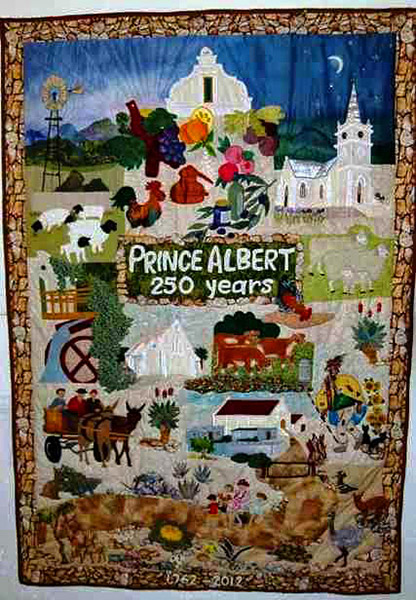 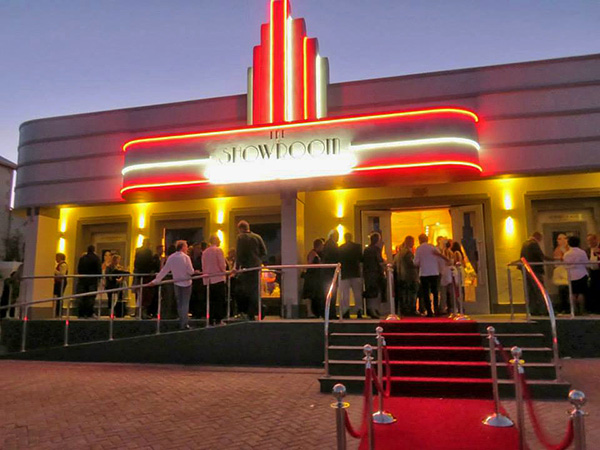 The Showroom Theatre in Prince Albert

To celebrate the 250th anniversary of Prince Albert in 2012 a spectacular Heritage Quilt was created by the village’s Patchwork Club.

The quilt depicts some of the people, animals, buildings, churches and of course the culture and history of Prince Albert. The quilt is on permanent display at the Prince Albert Library in Church Street.

A recent attraction in Prince Albert is the Showroom Theatre. The brain child of Johnny Breedt, this 140-seater venue boasts a high-definition movie screen with surround sound, lighting and acoustics that would put many a big-city theatre to shame. 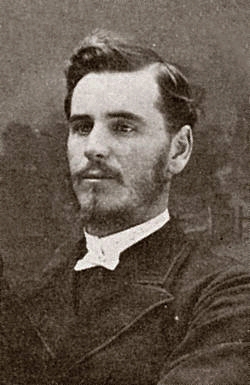 Configured as a movie theatre and as a venue for live performances, the Showroom has enjoyed considerable success with its programme of popular live music acts and cinema. This is no cheap ’n cheerful two-bit converted shell. The theatre is a landmark in Church Street, Prince Albert’s main road, with its elegant Art Deco style. 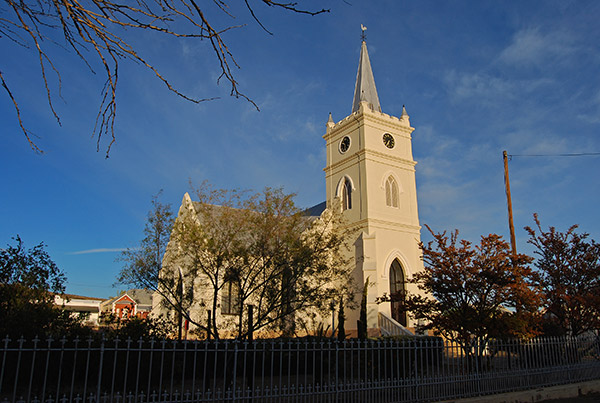 Annie Luttig was appointed church organist in 1892 and held the post for 58 years. During the 1850's and 60's there was much building activity in the village and Carel Lotz created his famous Prince Albert gables.

A stroll through the quiet streets of Prince Albert will reveal a rich variety of well-preserved examples of Karoo cottages, Victorian and Edwardian era homes and National Monuments.