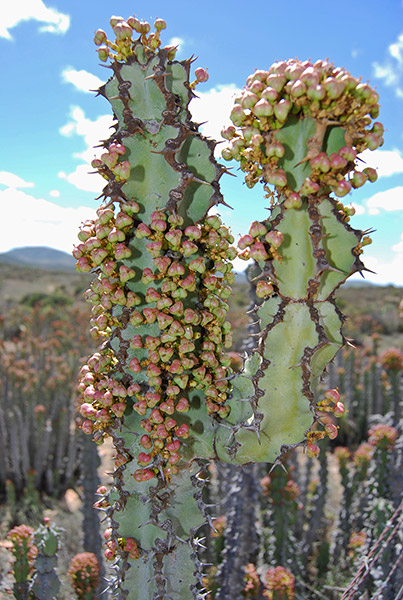 Jansenville is situated on the banks of the Sundays River on the southern fringe of the Camdeboo Plain. The area is known as the Noorsveld named after the Euphorbia coerulescens, known locally as Noors. The area around Jansenville is prolific with stands of Noors and during times of drought the Noors is often chopped up as fodder for livestock and therefore conditions for livestock production are on average three to four times more productive than areas in the vicinity where the Noors does not grow.

Although the Euphorbia coerulescens is the most common Euphorbia species, there are half a dozen different species of Euphorbia growing in the area, with the very rare Euphorbia jansenvillensis endemic in the district. The origin of the name Noors is thought to derive from the name gorse. British settlers thought this spiky plant with its yellow flowers similar to gorse which grows in England. It is presumed that gorse evolved via Dutch speaking settlers into Noors. 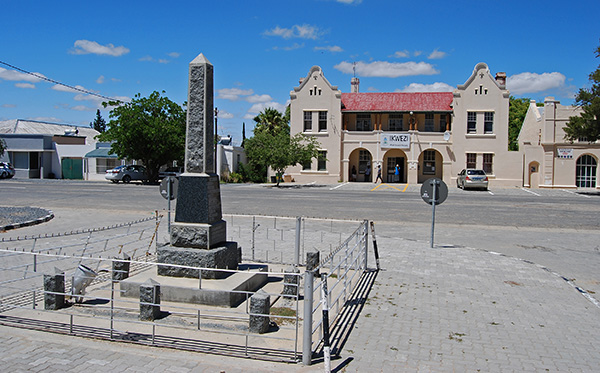 Jansenville lies north of the Klein Winterhoekberge, directly translated as the Small Winter Corner Mountains, and is tucked away in the lee of a series of rugged hills and valleys immediately to the north of the town. To the north the R75 connects Jansenville to Graaff-Reinet and via the gravel R337 to Pearston. South of Jansenville the R75 crosses the Sundays River and continues for a distance of 139-kilometres to Uitenhage and beyond to Port Elizabeth. The road passes the renowned Addo Elephant National Park south-east of the R329 junction west towards Steytlerville. Due west of Jansenville a tarred road leads to the isolated railway junction at Klipplaat and beyond to Willowmore. From Klipplaat the gravel R338 leads north across the Plains of Camdeboo for 72-kilometres to Aberdeen. 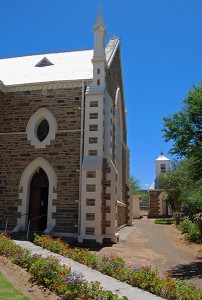 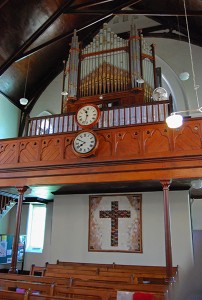 The Dutch Reformed Church in Jansenville is unusual in that the bell tower is separate to the church. The church is of typical Victorian-era design, complete with decorative plaster quoins on the corners of the exterior walls. The building was designed by prolific ecclesiastical architect Carl Otto Hager, whose plans were later revised by A.H. Reid of Port Elizabeth. 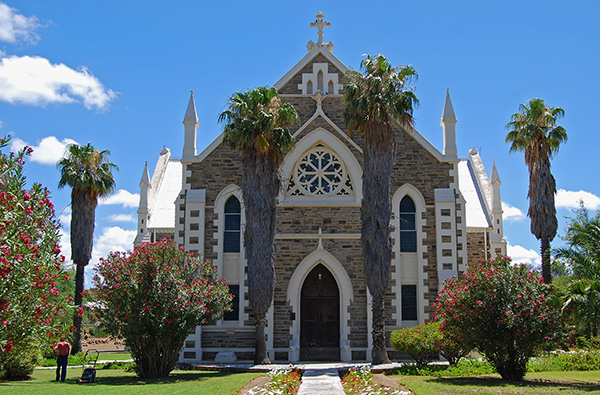 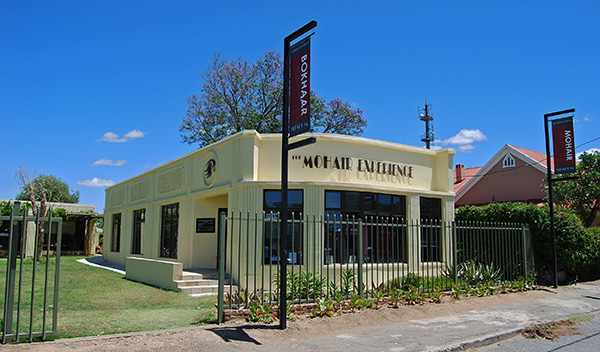 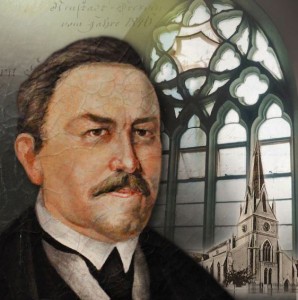 The cornerstone of the church was laid on 16 August 1884 and the building was consecrated on 20 June 1885. The wood carving around the pulpit, although simple in design, was carefully crafted. The different woods used creating an appealing contrast of colours. The first organ used in the church can still be seen next to the pulpit, however this was replaced with the grand pipe organ still in use to this day.

The organ pipes are decorated with gold-leaf motifs that add to and complement the character of the building. The beautiful patchwork tapestry Cross that hangs beneath the organ was painstakingly stitched by members of the congregation and is a feature of the church. Interestingly the organ is situated at the rear of the church opposite the pulpit and according to the church attendant, or koster, was built at the rear of the church to ensure that its splendid appearance did not distract the congregants from providing their full attention to the sermon. 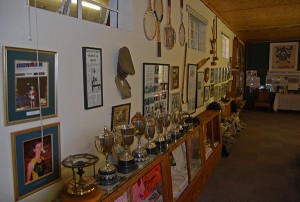 Exhibits in the Jansenville Museum 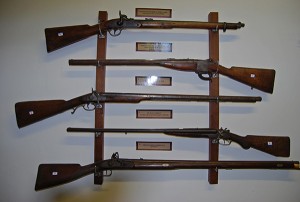 Rifle Exhibit in the Jansenville Museum 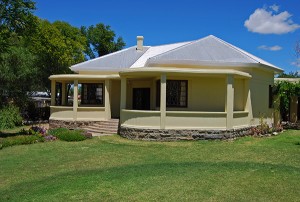 The Jansenville Museum on Bridge Street is better known as the Sid Fourie House. Commensurate with the International Mohair Summit held in Jansenville the museum was opened in November 2009. The museum focuses on the story of Mohair in South Africa and fully demonstrates the process of mohair production from the goat to the garment. 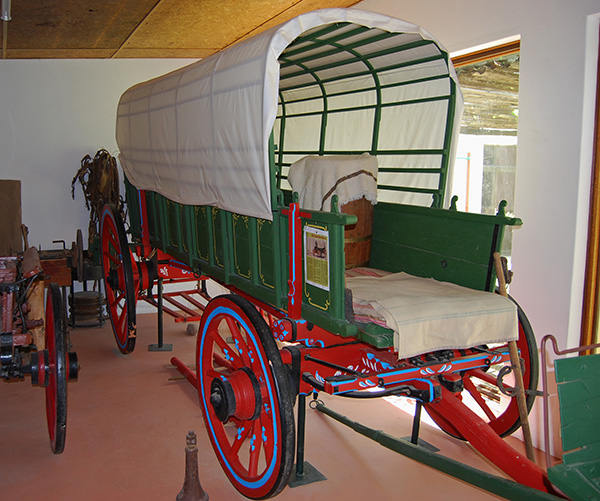 The museum shop sells a variety of fine quality mohair products supplied by local producers. The museum also showcases the history and culture of Jansenville and nearby Klipplaat with a fine collection of local memorabilia and artefacts. The Angora goat is the mainstay of the local agricultural economy and Jansenville is justifiably regarded as the crucible of Mohair production in South Africa.

The museum is named after Sid Fourie who was born in the village in 1896 of an Afrikaans father and an English mother. On leaving school he made a living digging wells and riding transport due to the lack of employment at that time. In 1913 he clerked for a local firm of attorneys. In 1914 he enlisted in the local 20th Mounted Rifles. Soon thereafter he saw action on the Orange River near Upington in the campaign to supress the rebellion against the Government of General Louis Botha who had taken the newly established Union of South Africa into the First World War in support of Britain. 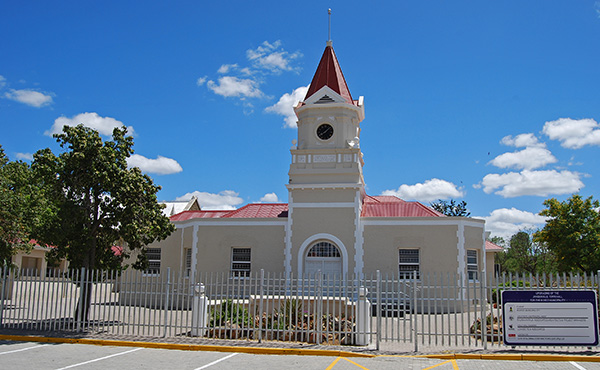 In 1918 Fourie bought the Jansenville Chronicle and served as its editor for 45-years. Fourie was active in local politics, serving on the town council for 25-years and as Mayor of Jansenville for 15-years between 1934 and 1947. During his tenure as Mayor, Jansenville was electrified, an airfield was constructed and he oversaw the planting of thousands of trees to beautify the town.

Fourie authored a number of books and supported a number of local children through university and finally bequeathed his art deco style house to the town which now forms part of the museum.