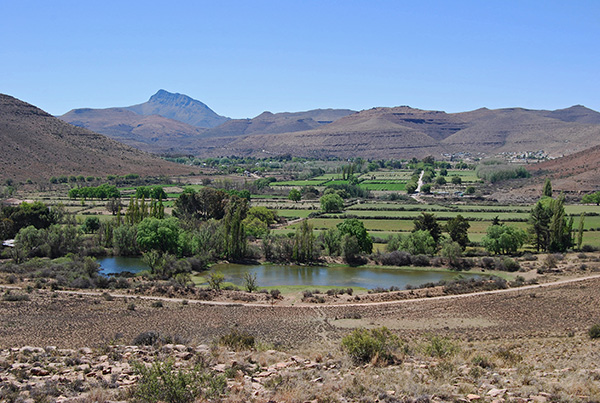 Tucked away is a secluded valley in the foothills of the Sneeuberge, or Snow Mountains, Nieu Bethesda is a delightful Karoo village in spectacular surroundings overlooked by the 2502-metre high Kompasberg, or Compass Mountain. Nieu Bethesda is one of those Karoo villages situated completely away from any of the highways and main roads that criss-cross the Great Karoo. The village has preserved its authentic Karoo character and ambience whilst being open to visitors looking to experience the tranquillity and the beauty of its natural surroundings. 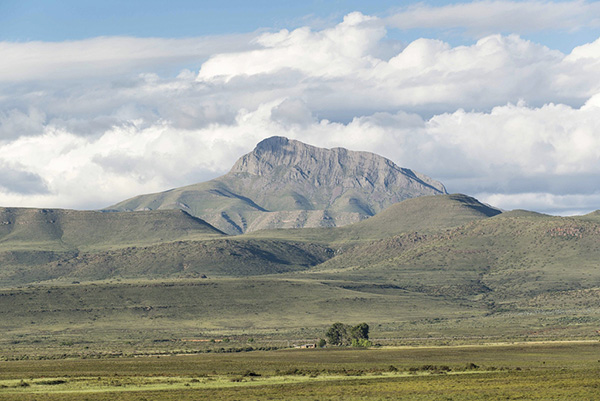 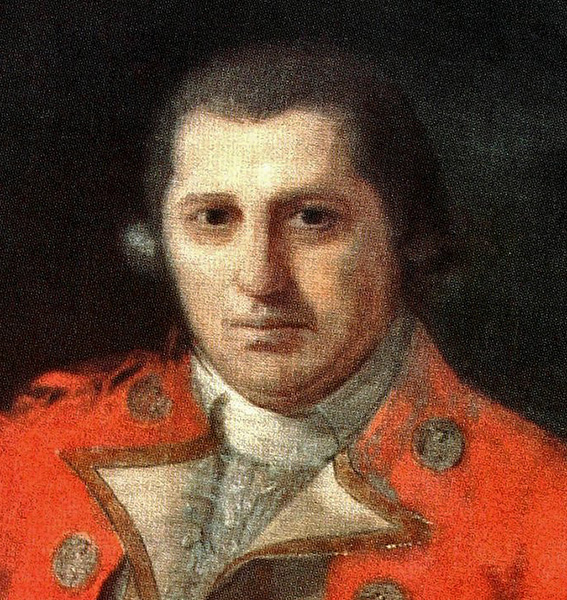 The mountain was so-named by the explorer Robert Gordon in 1778 as he observed streams flowing down the mountain in all directions from the summit.

The mountain is the highest peak in the Cape Midlands, dominating the horizon from both the north and south with its distinctive conical shape. For an energetic outdoor experience the ascent of Kompasberg reveals magnificent views across the jumble of mountains, hills and valleys to the east, west and south and across the wide expanse of the Upper Karoo towards distant Richmond and Hanover. 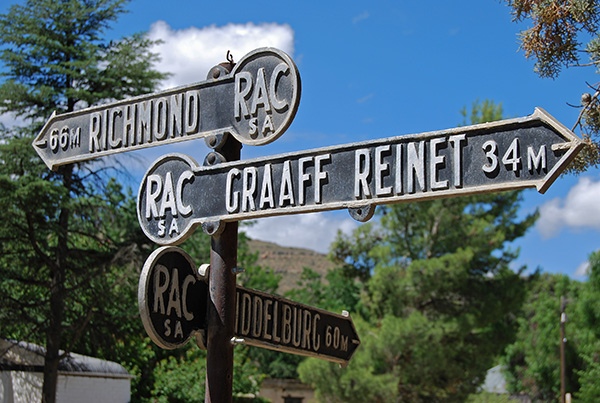 Although a popular tourist destination Nieu Bethesda has no fuel stations, credit card facilities or automated teller machines, and it is therefore advisable to make appropriate arrangements prior to visiting the village. Nieu Bethesda lies some fifty kilometres north of Graaff-Reinet, accessible via the N9 highway and the branch road via Rubidge Kloof.

An alternative route towards Murraysburg ascends the Oudeberg Mountain Pass before branching off the R63 towards Nieu Bethesda via a gravel road. To the north Middelburg and Richmond are accessible via a variety of gravel roads winding through the foothills of the Sneeuberge and out onto the escarpment of the Upper Eastern Karoo.

The most famous attraction within Nieu Bethesda is undoubtedly the remarkable, off-the-wall, Owl House and its collection of hundreds of sculptures encompassing camels, glass-bottled skirted ladies, pilgrims, quirky individuals, strange animals and owls amongst others, constructed from cement, chicken wire, coloured glass and a variety of other locally-sourced materials. 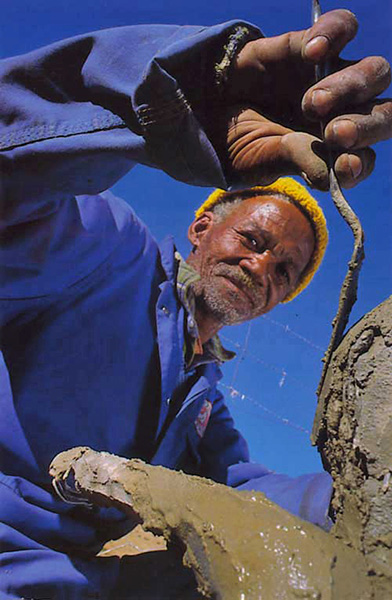 The Owl House was the creation of Helen Elizabeth Martins and her loyal assistant Koos Malgas between 1945 and 1976. Born in Nieu Bethesda in 1897, Helen was the youngest of six children. She completed her schooling in Graaff-Reinet with a teaching diploma. In 1919 she moved to the Transvaal and married Willem Johannes Pienaar who was a teacher and dramatist. Her marriage was unhappy and she divorced in 1926.

She returned to Nieu Bethesda in 1928 to care for her ailing parents. Helen’s mother passed away in 1941 and her father in 1945. She had a bad relationship with her father, moving him into an outside room, later named the Lion’s Den. The walls of the Lion’s Den were painted an ominous black. 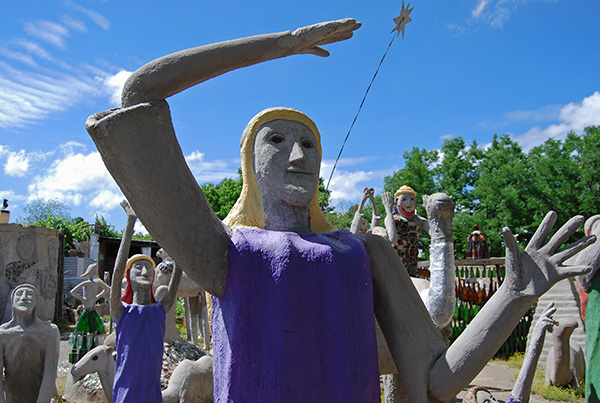 After the death of her parents Helen Martin began to transform her home into a wonderland of colour, light and texture giving life to her inner creativity and imagination, an escape from the dullness and despair of her previous life. Helen employed local labour and especially Koos Malgas to help construct her Camel Yard, adjacent to her house, which she filled with a wild assortment of sculptures mostly facing east as if on a mystical journey towards the Orient and the rising sun. 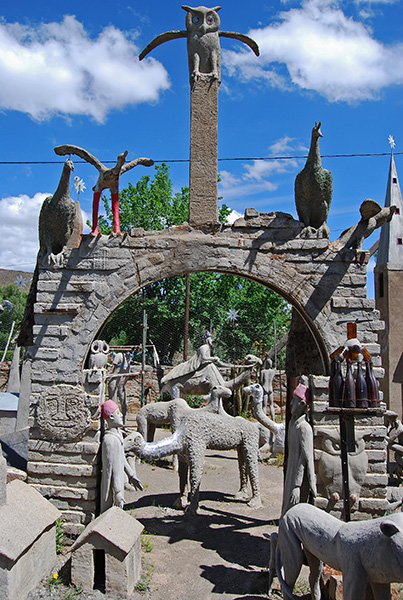 The Owl Arch at the Owl House

Her sculptures and decorations drew on an assortment of Bible stories, the Orient, everyday objects and the Rubaiyat of Omar Khayyám (the title that Edward Fitzgerald gave to his translation of a selection of approximately one thousand poems originally written in Persian attributed to Omar Khayyám, a Persian poet, mathematician and astronomer who lived between 1048 and 1131). 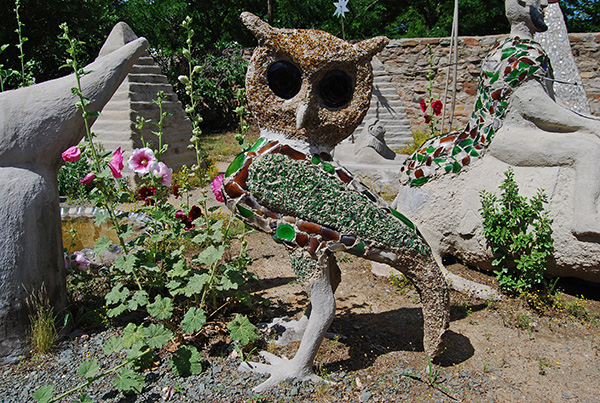 Her artistic hand touched every space of her house. The walls, ceilings and even the doors were decorated by finely ground glass of various colours. Helen Martin’s Owl House touched the lives of many while she was alive, even inspiring the playwright Athol Fugard to pen the much-loved play “The Road to Mecca” which was later made into a film. 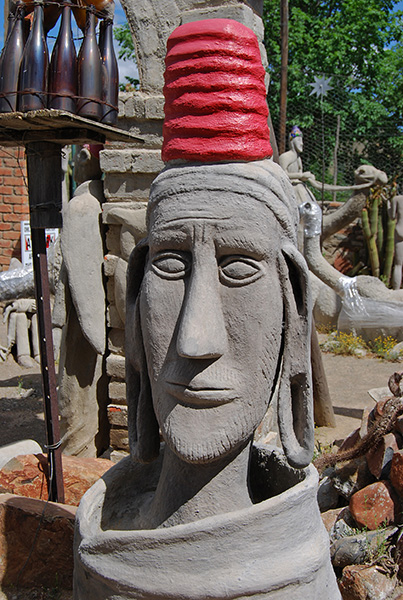 Man in a Red Fez

In a conservative society Helen Martin’s lifestyle was regarded as eccentric and even abhorrent by many in the local community and she became increasingly reclusive, avoiding contact with others, even when collecting her pension at the local post office. The Owl House was the name given to Helen Martin’s home by the local inhabitants after she placed owls with coloured glass eyes and adornments on the roof and on the veranda to guard the house. She also fortified the area by putting up wire fencing. Owls also guard each corner of the property. Helen Martin’s eyesight began to fail in 1976 and dreading her approaching blindness she committed suicide by drinking caustic soda at the age of 78. She died three days later in hospital in Graaff-Reinet. 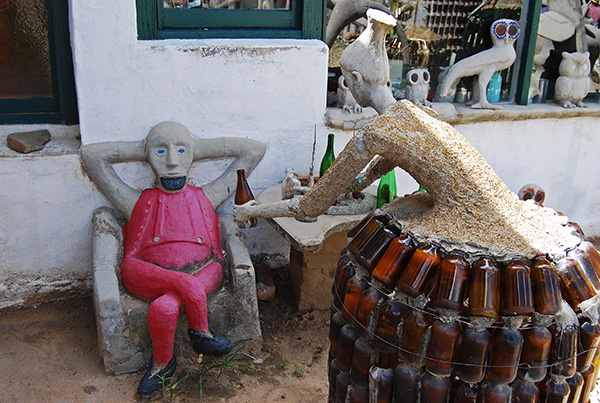 Relaxation at the end of a hard day

The famous palaeontologist James William Kitching was born in Graaff-Reinet in 1922 and grew up in Nieu Bethesda and is regarded as one of the World’s greatest fossil discoverers. His passion for fossils started at the age of six when he explored the countryside around Nieu Bethesda, where he grew up, to find specimens for Robert Broom. He discovered the type specimen of Youngopsis kitchingi Broom. This fossil was the first of many new species which he would present to science in later years. 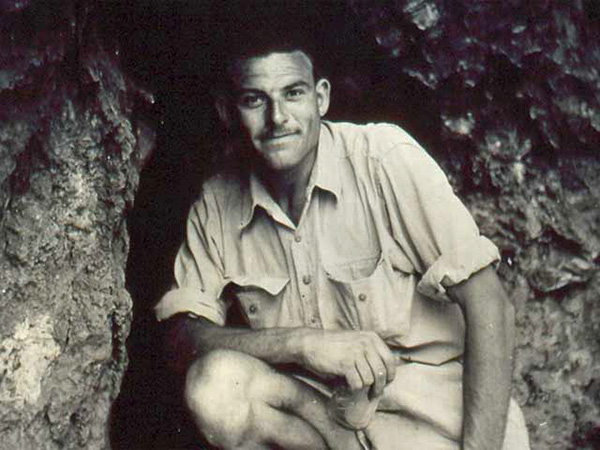 James Kitching as a young man

His work in the southern Hemisphere, including Antarctica, led to the development of one of the World’s finest fossil collections housed at the Bernard Price Institute for Palaeontological Research in Johannesburg. Kitching published more than fifty books on the subject of palaeontology and his contribution to Karoo palaeontology of southern Africa and Gondwana earned him international acclaim. 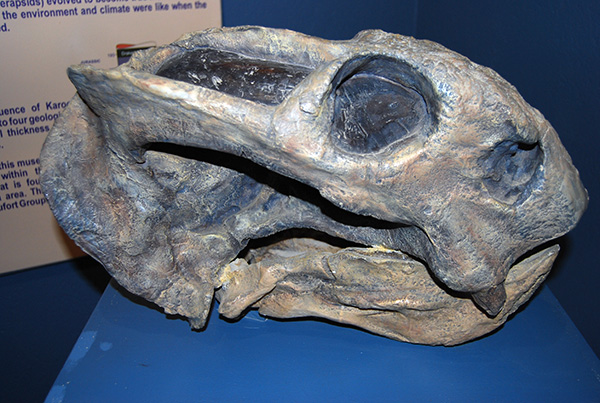 Replica of the head of Dicynodon in the Kitching Fossil Centre

He also studied Pleistocene mammals and researched fossils from several cave sites, the most notable being that of the Cave of hearths and the limestone formations at Makapansgat, in what was then the Northern Transvaal, where he discovered the type specimen of the prehistoric man known as Australopithecus, A. promethetheus in 1947. This is now considered a synonym of the type species A. africanus which Professor Raymond Dart described in 1925.

Kitching pictured on the left in Antarctica

Kitching Ridge, A prominent rocky ridge on the western side of Shackleton Glacier, between Bennett Platform and Matador Mountain, in the Queen Maud Mountains in Antarctica was named in Kitching’s honour. He was invited to join the Ohio State University Institute of Polar Studies geological party to the Queen Maud Mountains in 1970 and 1971. Together with James Collinson, he was the first person to identify and collect therapsid (mammal-like reptile) fossils in Antarctica of the Lystrosaurus Zone age, confirming the former continental link between southern Africa and Antarctica. 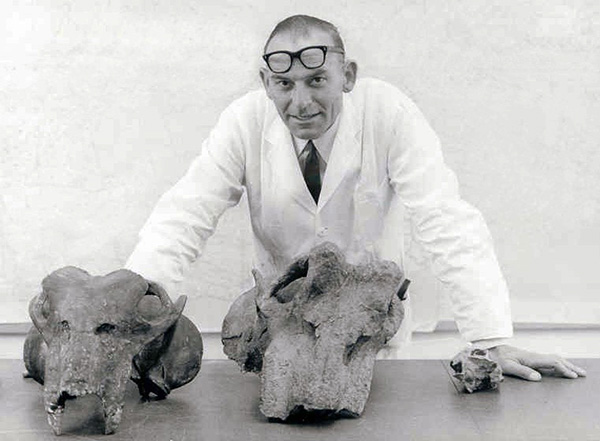 Replica of the head of Dicynodon in the Kitching Fossil Centre

For his research on Karoo fossils, completed in 1972, he was awarded a doctorate. Having refined the biostratigraphy of the rocks of the Beaufort Group in South Africa, he started a major collecting project in the Triassic and Jurassic rocks of the Elliot and Clarens Formations in South Africa, and published the first bio stratigraphic scheme for these lithological units as well. At the time of his retirement at the age of 68 in 1990, Professor James Kitching was Reader in Karoo Biostratigraphy and also Director of the Bernard Price Institute for Palaeontological Research. Subsequently he was appointed Honorary Research Professorial Fellow at the Institute, a position he held until his death. 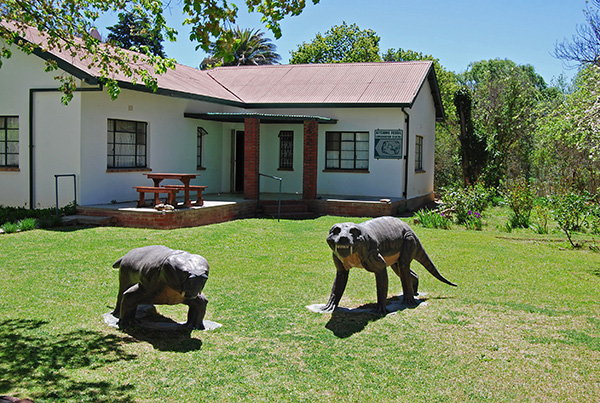 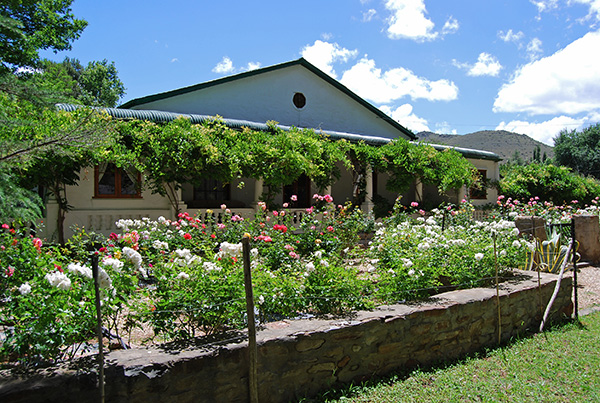 A profusion of roses adorn the gardens of Nieu Bethesda

A perennial spring bubbles out of the ground on the plateau just above Nieu Bethesda and feeds the village’s network of water furrows, one of few functioning furrow irrigation systems still in operation in South Africa. The murmur of water through the furrows that irrigate the village’s gardens ensures that Nieu Bethesda is a green oasis amidst the dry Karoo hills and mountains. 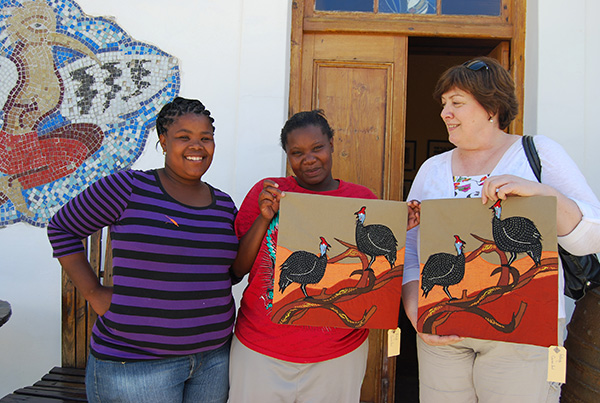 Many of the cottages in town are resplendent with flowers, and particularly a profusion of roses, providing a flash of colour amidst the shady tree-lined streets.

The streets remain untarred and the locals greet visitors like friends. Nieu Bethesda has attracted a number of artists and a variety of creative people and there is a wide selection of arts and crafts studios, shops and galleries together with a number of great delicatessens and restaurants. 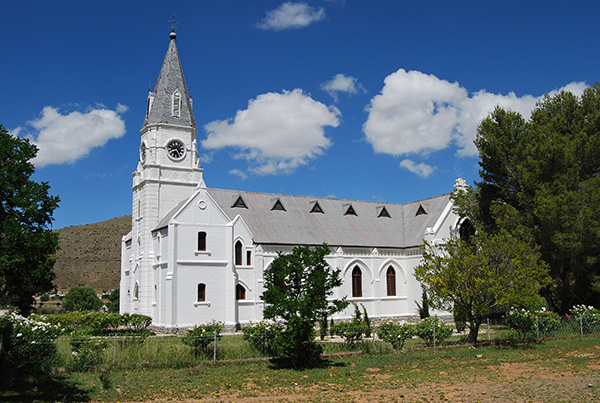 An amble through the quiet tree-lined streets of the village reveal a variety of beautifully restored Karoo cottages and some grander residences together with the imposing Dutch Reformed Church.

Night skies are clear, velvety and unforgettable and the air is crisp and enlivening. Ancient pear trees and quince hedges edge the roads and fields. Despite the fact that the village has no streetlights it is safe to walk at any time of the day or night.