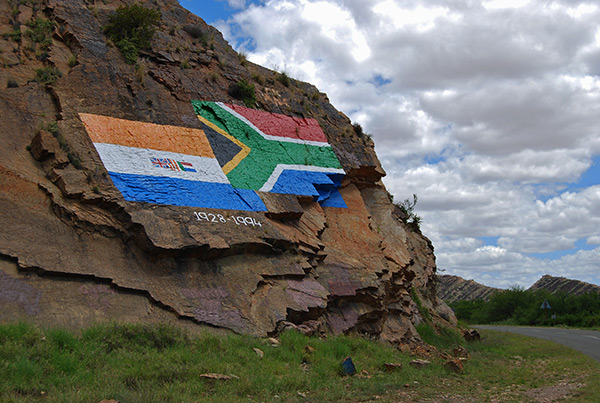 Valley of the Flags near Steytlerville 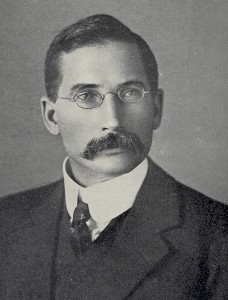 For a fascinating look at some of the most unknown and out of the way villages on the south eastern fringe of the Great Karoo the circular route connecting Mount Stewart, Klipplaat and Miller is a journey into an era long past and almost forgotten. Crossing the Groot River in the direction of Uitenhage along the R329 the road passes through Noorspoort Pass, also known as the Valley of the Flags. The original flag painted on the rock above the road was the South African flag used between 1928 and 1994. This flag was introduced by Prime Minister JBM Hertzog and reflected the Union of South Africa’s predecessors. 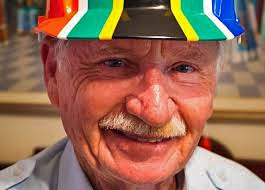 The flag incorporated the Prince’s Flag of the Netherlands with the addition of a Union Jack to represent the Cape Province and Natal, the former Orange Free State flag, and the former South African Republic flag. Until 1957, the flag was flown subordinate to the British Union Jack. The new South African flag was added after 1994 reflecting the political change in South Africa.

The new flag was designed by the State Herald, Frederick Brownell, and officially authorised by State President F.W. de Klerk on 20 April 1994. The flag was officially hoisted a week later, on 27 April 1994.

The new flag was intended as an interim measure, but it proved so popular that when the final Constitution was finalised in 1996, it became the permanent flag of South Africa.

Just beyond the Valley of the Flags a gravel road branches north towards Mount Stewart passing the 61-metre high Draaikrans, an exposed and twisted rock face formed millions of years ago when the Karoo lay at the bottom of the sea. The temperature under the water was sufficiently warm for the rock to be pliable enough to bend without shattering and the movement of the earth’s tectonic plates forced the sea bed to rise, forming the spectacular twisted and contorted Cape Fold Mountains. 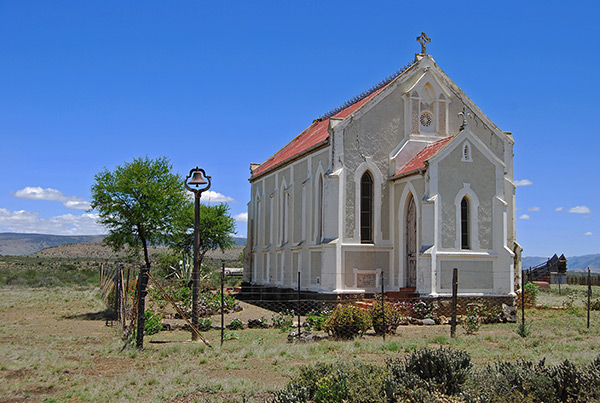 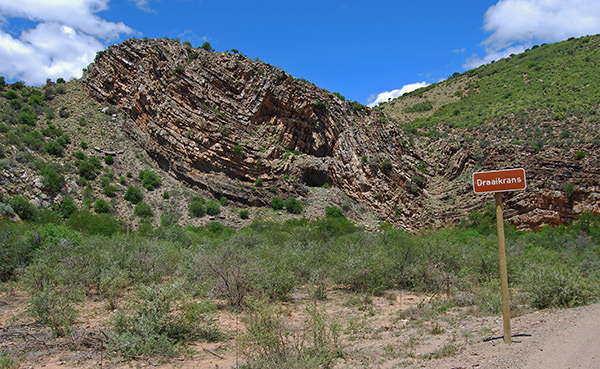 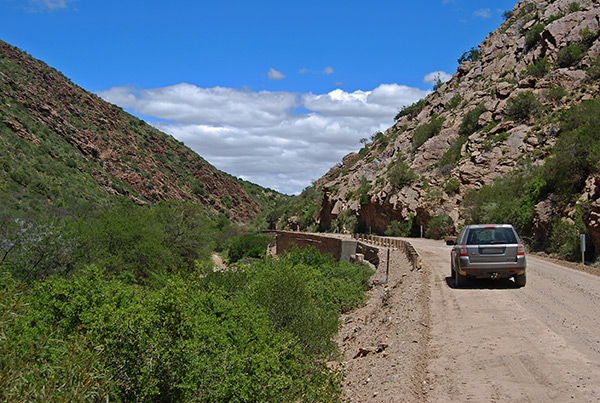 Beyond Draaikrans the gravel road emerges from the narrow defile through the Grootrivierberge, or Big River Mountains, onto the southern fringes of the Camdeboo Plain. The road reaches Mount Stewart at the junction linking Klipplaat with Uitenhage. Mount Stewart was established as a railway station on the line linking Klipplaat and Port Elizabeth. With the demise of the local railway services Mount Stewart has slipped into almost complete obscurity. The only building of substance surviving in the hamlet is the chapel dating back to 1904. The chapel stands in glorious isolation on a rise above the hamlet and its simple lines and ageless simplicity in the midst of the open plain is a quintessential element of this part of the Great Karoo. Beyond Mount Stewart the gravel road continues towards Jansenville. 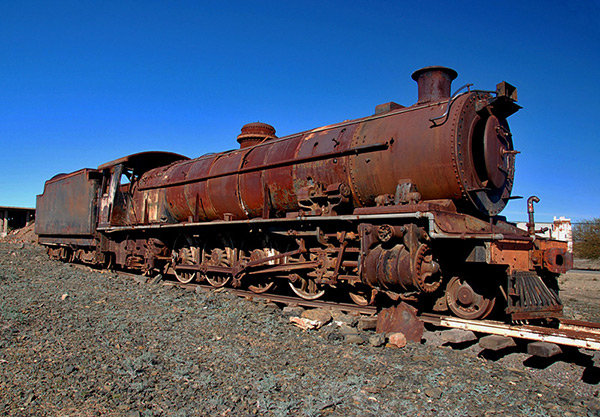 Turning onto the gravel R338 the road continues across the open plain for a distance of 18-kilometres to the rather ramshackle railway junction of Klipplaat. The village owes its existence to the enormous value of the wool industry and the need for an effective and reliable means to transport the bales of wool to the coast for export.

By 1864 the export of wool necessitated the use of 2500 wagons with 9000 drivers and 40 000 oxen to get the wool to the coast. Adverse road conditions and poor grazing for the oxen due to repeated periods of drought brought about the Midlands railway line as a means to improve the dire transport system. 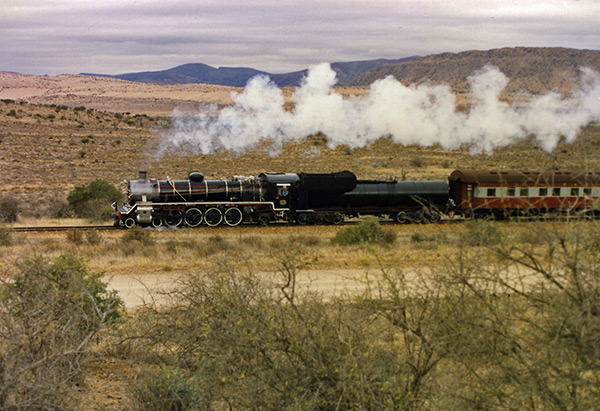 The railway was started in Port Elizabeth in 1872 reaching Klipplaat in 1879 and beyond to Graaff-Reinet in the same year vastly improving the transport efficiency of the wool export from the Cape Midlands via Port Elizabeth. In recent times the railways have been usurped by road transport and this has resulted in the virtual collapse of the railway network with a devastating effect on Klipplaat. 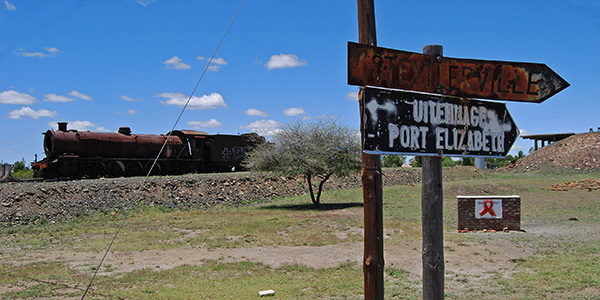 Today the village has a rather forlorn air with a rusty steam engine mounted on a plinth providing a glimpse of a more prosperous past.

Beyond Klipplaat the R338 continues across the Camdeboo Plain towards Aberdeen. From Klipplaat the gravel road leads due west to the tiny hamlet of Miller and beyond to Swanepoel’s Poort through the Grootrivierberge to the R329 linking Steytlerville and Willowmore. 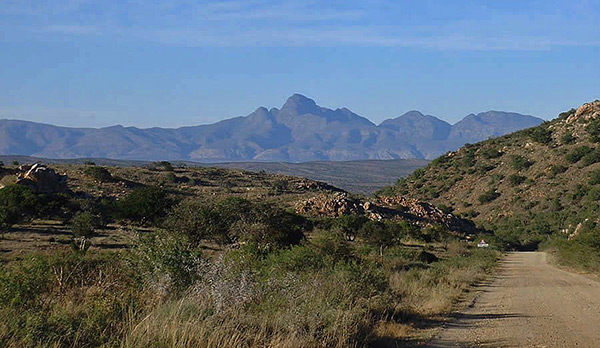 Cockscomb Peak in the Grootwinterhoek Mountains

The spectacular Baviaanskloof Wilderness area lies just 30 kilometres due south of Steytlerville. However, this area is very difficult to access due to the rugged chain of mountains to the south of the village including the Baviaanskloof Mountains and the Groot Winterhoek Mountains further to the east.

South of Steytlerville a gravel road accesses Patensie via the Groot River Pass and the eastern end of Baviaanskloof. This route is accessible only to 4X4 vehicles and the 120-kilometre route will take a minimum of three and a half hours to drive. The beautiful Hadley farm lies along the route and the road winds along the northern slopes of the Baviaanskloof Mountains before striking south through the Groot River Pass emerging onto the R332 just to the north of Patensie. 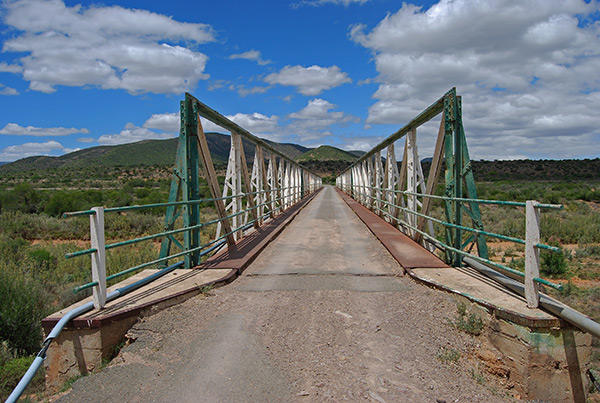 This route passes the distinctive 1758-metre high Cockscomb Peak in the Grootwinterhoekberge.

The only other access to Baviaanskloof from Steytlerville is via Willowmore at the western end of the valley. The R329 linking Steytlerville and Willowmore is the last tarred single lane concrete road in South Africa.