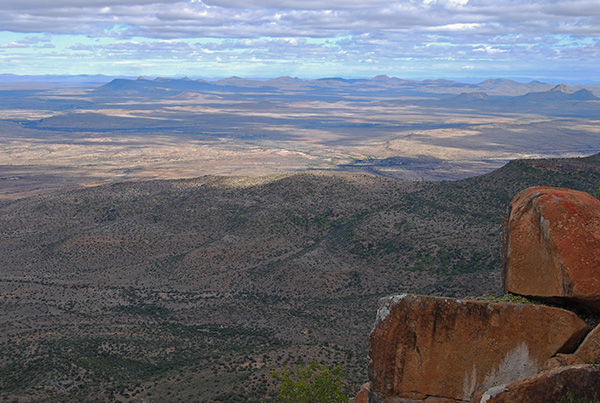 View across the Camdeboo with the Rooiberge east of Aberdeen 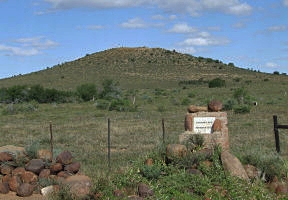 Some seven kilometres along the highway towards Graaff-Reinet the road passes Gordon’s Kop from where the explorer Captain Robert Jacob Gordon drew a panoramic view of the Camdeboo Mountains in 1777 from the crest of a small koppie or hillock. The spot is marked with a small memorial stone. 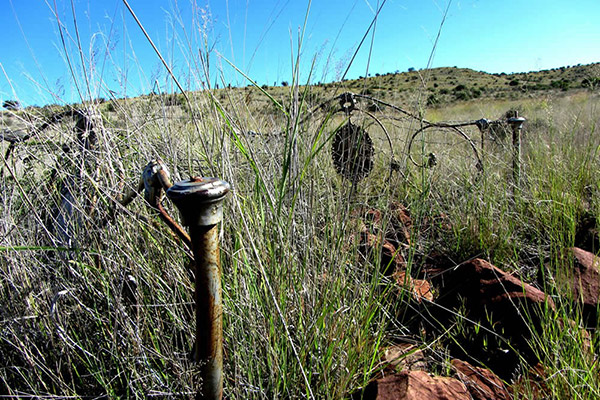 Some 25-kilometres from Aberdeen the road passes an old cast iron bedstead which according to local folklore marks the grave of a woman who took ill and died while her family was trekking by ox-wagon through the Karoo. As they were not from the area her husband simply buried her where she had died and used their marital bed to mark and protect her grave, thereafter proceeding on the journey with the rest of the family. Although the true details will probably never be known the grave site can be easily seen on the right on the N9 highway towards Graaff-Reinet. 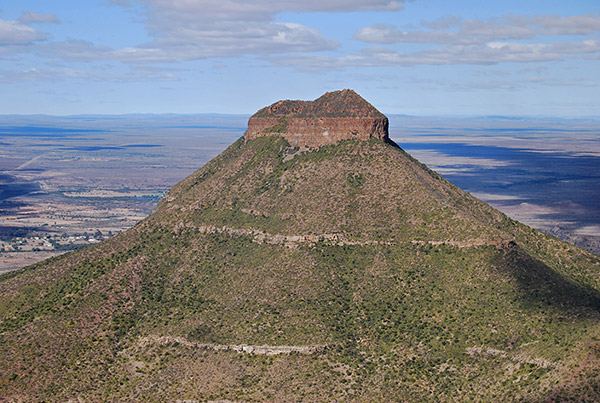 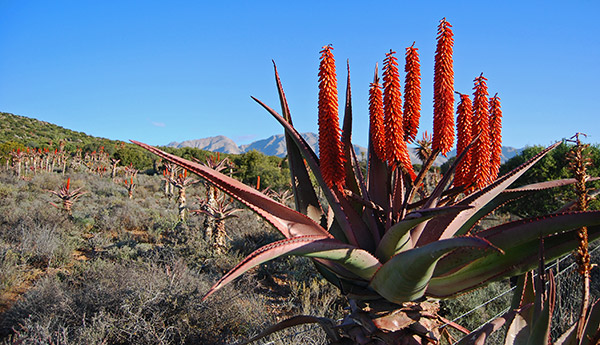 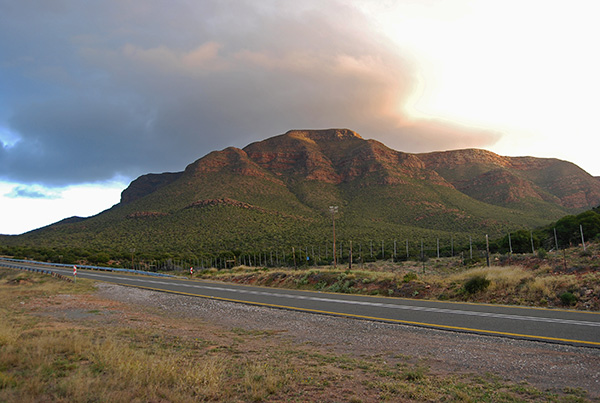 The road between Aberdeen and Willowmore

South from Aberdeen the N9 highway strikes out across the vast flat Camdeboo Plain almost dead straight for a distance of eighty kilometres towards the Beervlei Dam and beyond towards Willowmore. From the Beervlei Dam the road winds through the picturesque hills and valleys comprising the foothills of the Witteberge or White Mountains through the Perdepoort or Horse Valley skirting the eastern slopes of the Boesmanspoortberg before leading past the R329 junction towards Steytlerville before entering Willowmore. Beyond Willowmore the N9 highway loses elevation continuing through increasingly mountainous and scenic terrain towards Uniondale in the Klein Karoo.

For a taste of the essence of the Great Karoo the circular route from Aberdeen though Murraysburg and Graaff-Reinet is a must. The route leads out along the R61 towards Beaufort West across an enormous open plain known locally as "Die Vlaktes" or The Flats. About eighteen kilometres out of Aberdeen along the R61 turn north onto the gravel road towards Murraysburg. The road skirts the western slopes of the Camdeboo Mountains and the great hulk of the 1777-metre Sleeping Giant and beyond into the valley overshadowed by the Onder Sneeuberge or Under Snow Mountains which rise to an elevation of 1924-metres. As one travels to the north the 1146-metre Vaalberg and the 1682-metre Wolwekop or Wolf’s Head dominate the landscape towards the west.

The Sleeping Giant between Aberdeen and Murraysburg

The road joins with the gravel road leading from Nelspoort before ascending the southern slopes of the 1771-metre Middelkop before leading into the isolated village of Murraysburg. This route exemplifies the quintessential Karoo with a landscape of wide open spaces, rugged mountains, the vista of flat topped Karoo koppies and the silence and solitude of this extraordinary place. Take the time to stop along the road and listen to the silence and take in the beauty of the Great Karoo landscape stretching out in all directions. 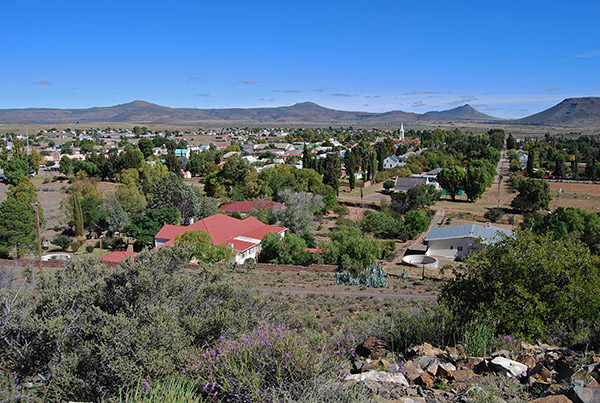 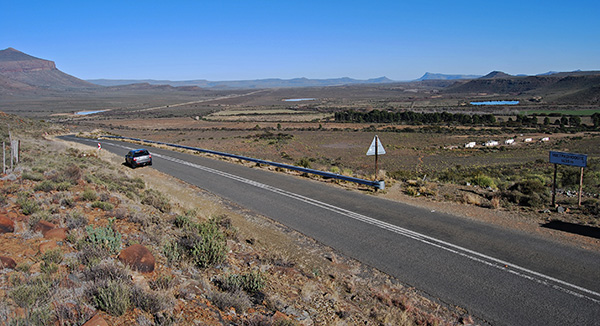 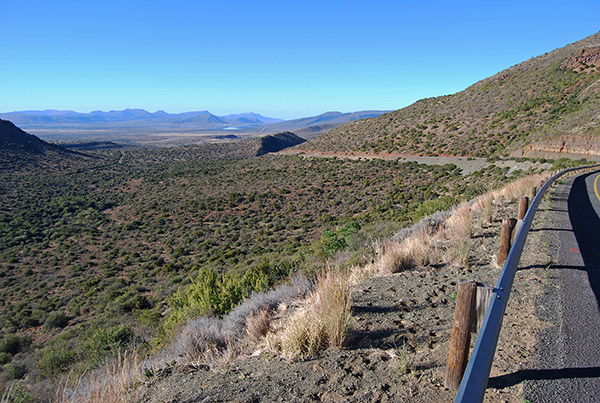 Take the time to explore the village and enjoy the vista across the town from the so-called Dokterskoppie, or Doctor’s Hill, before enjoying a light lunch. From Murraysburg continue along the R63 towards Graaff-Reinet. The road traverses the high escarpment winding through hills and valleys with distant views to the south to the 1909-metre high mountain known as “Die Duiwel” or the Devil and further along to the more distant 2278 metre high Toorberg or Bewitched Mountain. The road reaches a high point at Voetpadhoogte before gradually descending between high mountain ridges to the edge of the escarpment as one approaches Graaff-Reinet. The descent of the Oudeberg Mountain Pass just beyond the gravel road junction towards Nieu Bethesda reveals long sweeping views across the distant Nqweba Dam and the surrounding mountains encompassing the Camdeboo National Park. The road skirts the edge of the Nqweba Dam before rounding the mountainside and descends into Graaff-Reinet crossing the Sundays River below the dam wall. From Graaff-Reinet return to Aberdeen along the N9 highway. 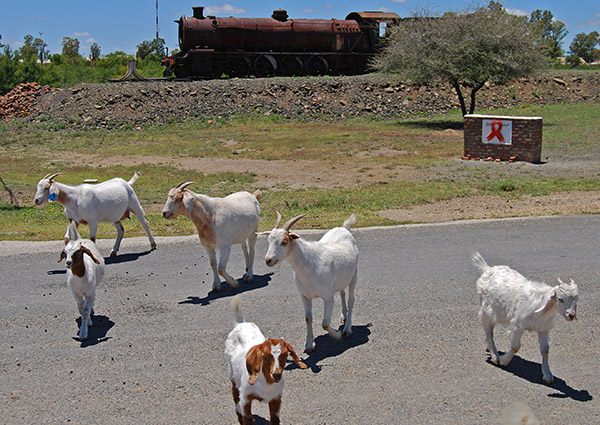 The Anglican and Methodist Churches in Klipplaat 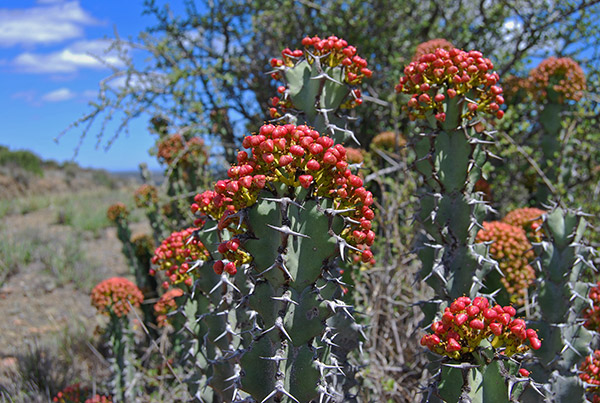 For a completely different experience concentrating on exploring the Aberdeen Flats take the R338 gravel road south east from Aberdeen towards the isolated railhead at Aberdeen Road. Beyond Aberdeen Road the road leads south towards the faded railway junction of Klipplaat. Both Aberdeen Road and Kilpplaat are symbols of a time past when the railways were the lifeline of the towns and villages spread across the Great Karoo. 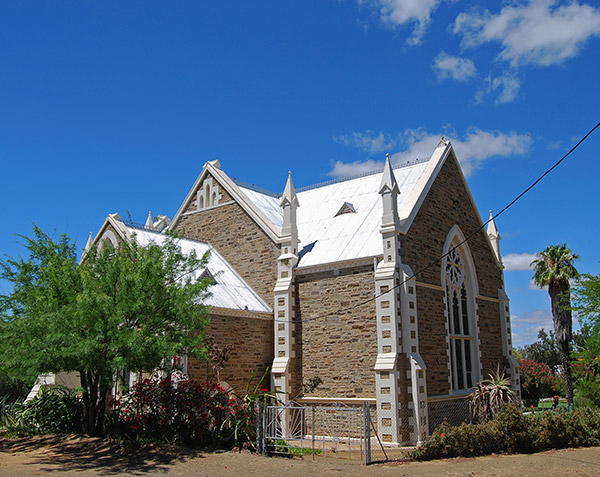 With the closure of many of these branch lines and the move towards road transport these tiny railway villages have faded into obscurity belying their important historical role in the economic well-being of many of the towns and villages across the Karoo.

In Klipplaat take the time to stop and admire the old rusted steam engine and the quaint century-old Methodist and Anglican churches that provide a glimpse on a time long past. 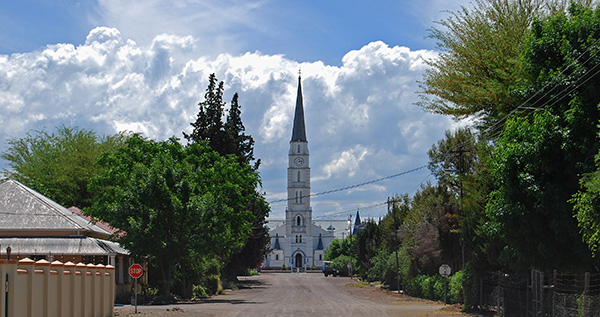 Beyond Klipplaat the R338 gravel road continues via Mount Stewart towards Steytlerville. From Klipplaat take the tarred road towards Jansenville. As one travels the 32-kilometres towards Jansenville the landscape changes becoming increasingly dominated by fields of Noors Euphorbia coerulescens, giving the name to the Noorsveld around Jansenville.

Enjoy a leisurely lunch in Jansenville taking the time to admire the unusual Dutch Reformed Church with its separate bell tower and the Mohair Experience Museum which focusses on the Mohair Industry and the history of Jansenville and the surrounding district, including that of Klipplaat.

The circular route leads north out of Jansenville along the R75 road leading over the Soutpansnek or Salt Pan Neck through a landscape dominated by Noors out onto the wide open plain towards Graaff-Reinet. The R75 passes a junction east towards Pearston and Somerset East before terminating on the southern outskirts of Graaff-Reinet.

From Graaff-Reinet return to Aberdeen along the N9 highway.