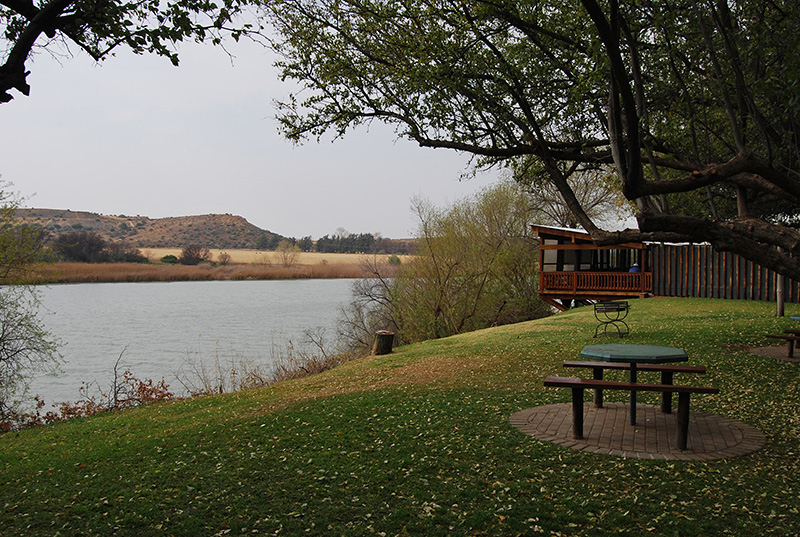 The Orange River at Orania

Orania is a small town located on the banks of the Orange River that has been developed as a stronghold for Afrikaans culture and the Afrikaner as a people who wish to exclusively preserve their language and identity. It is a place where anyone who identifies themselves as an Afrikaner is welcome to live. 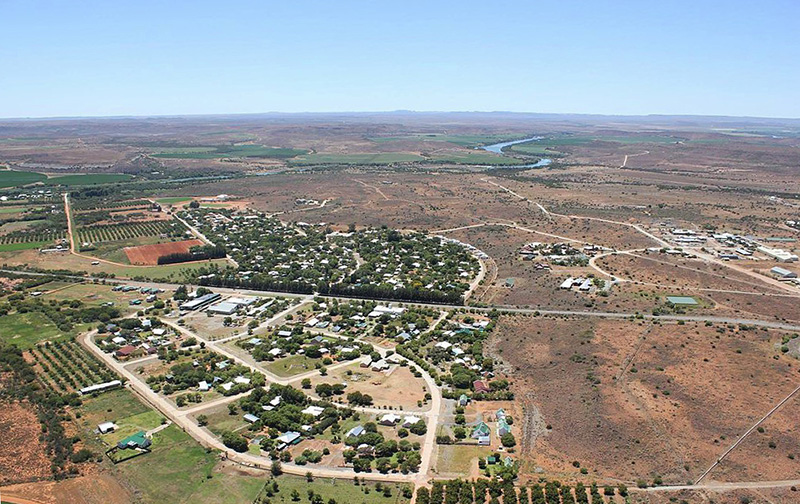 Orania is therefore a town and community that rejects the concept of a multicultural and diverse South African State and has as a consequence attracted a great deal of controversy in terms of its exclusion of all South Africans that do not identify as Afrikaners. 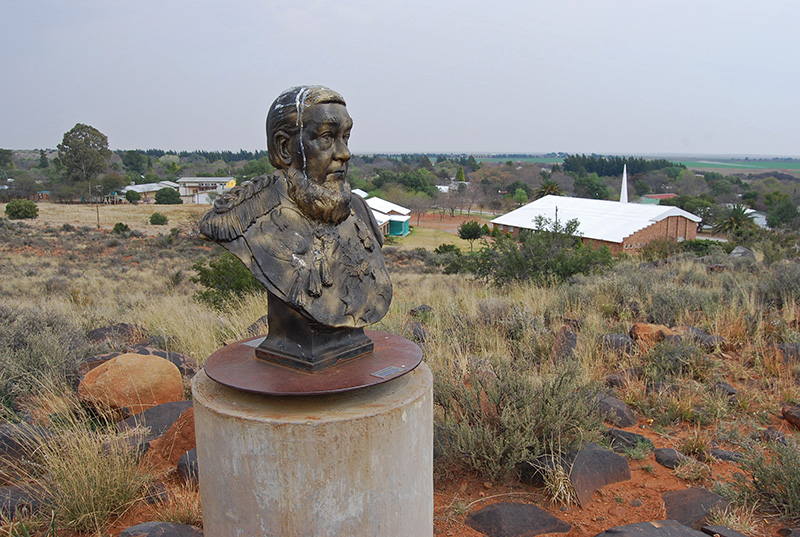 Bust of President Paul Kruger on Monument Hill in Orania

The town has an exclusively White population of approximately 1,700 people and has developed its own identity with the adoption of a town flag, radio station and local currency – the Ora, which can be used in the town together with the South African Rand.

The residents of Orania subscribe to a strong sense of self-reliance and all jobs, from management to manual labour, are filled only by Afrikaners. Non-Afrikaner workers are not permitted to work in the town unless they have skills none of the residents possess.

Orania has three residential areas, Kleingeluk – or small happiness, Grootdorp – or big town and Orania Wes – or Orania West. Kleingeluk is slightly separate from Grootdorp and is a poorer area of the town. Many of the houses constructed in the town have Cape Dutch features, however most date back to the time when the town was under the control of the Department of Water Affairs and as prefabricated structures were not designed for durability and have therefore needed renovation. 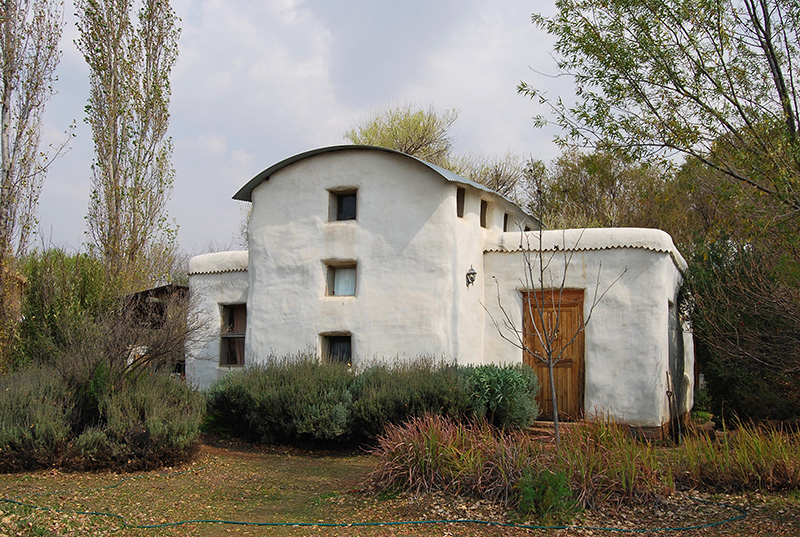 Some innovations in housing construction have been introduced with the use of plastered hay bales and the conversion of shipping containers as housing units. 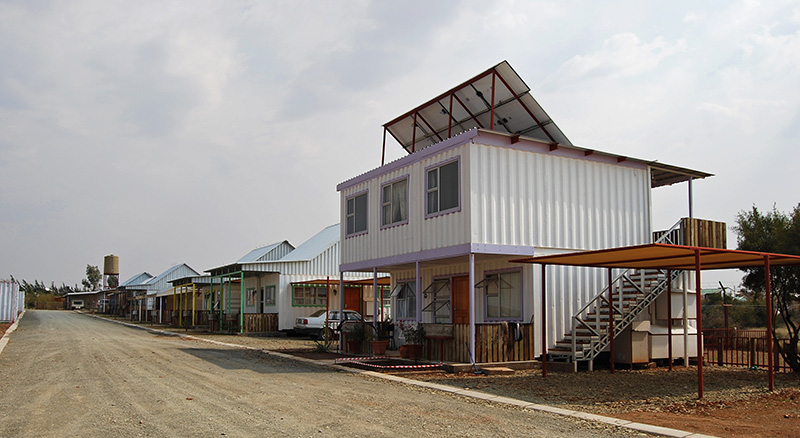 The town was originally 300-hectares in extent, however this has been expanded to include neighbouring farms where olives, fruit and pecan nuts are cultivated. Further agricultural land has been acquired by Kambro Landbou Koöperatief, a legal entity established to buy land on behalf of Orania. 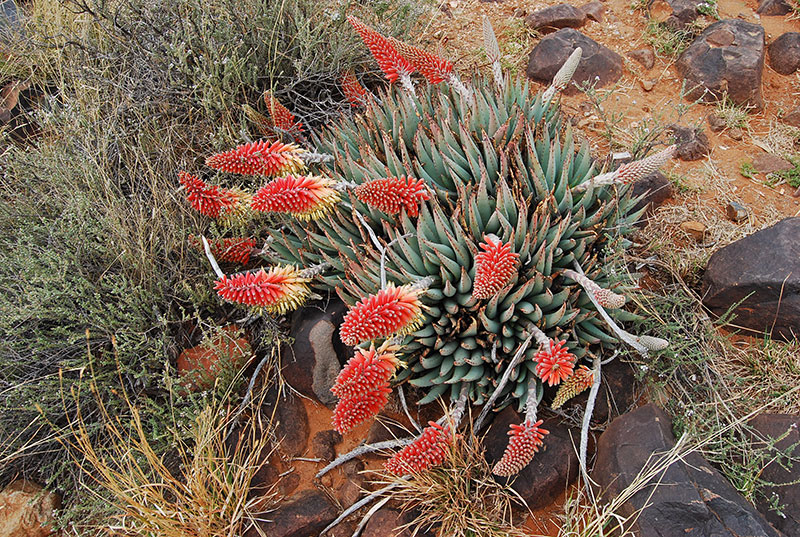 Although Orania is officially part of the Thembelihle Municipality with its headquarters in neighbouring Hopetown, it is not governed by the Thembelihle Municipality and as such receives no services from the local municipality. Orania is the only town in South Africa that still has its own Transitional Representative Council in place, and this Council oversees service provision for Orania. Citizens of Orania do not vote in elections for the municipal council of the Thembelihle municipality, but they vote for their own transitional representative council on the same day as the local elections take place. 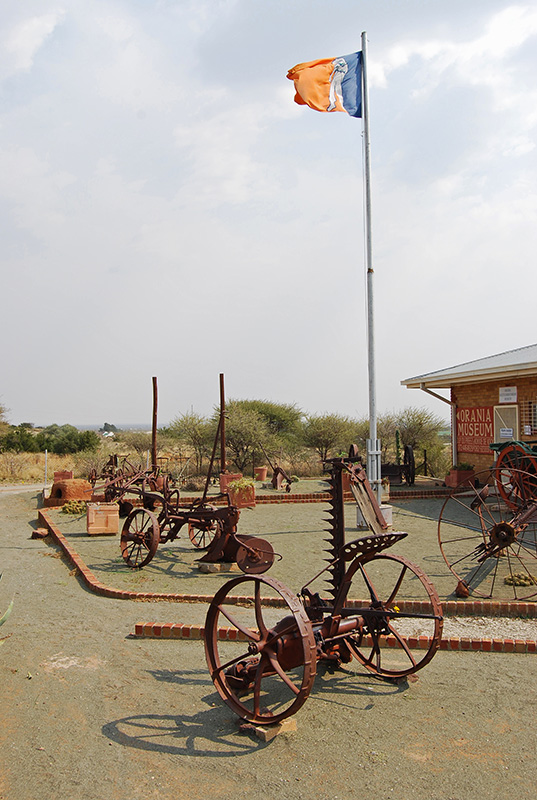 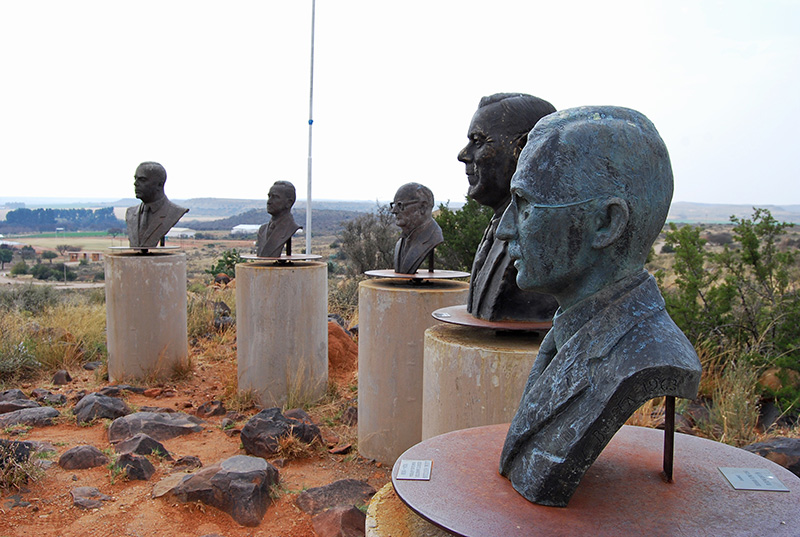 The town is privately owned by the Vluytjeskraal Share Block Company. Ownership of plots and houses is in the form of shares in the company, in terms of a share block scheme. No title deeds are provided, except for agricultural land. Share blocks are linked to portions of the company's real estate, and the shareholder acquires the right to use the property linked to the share block that they have purchased or acquired. 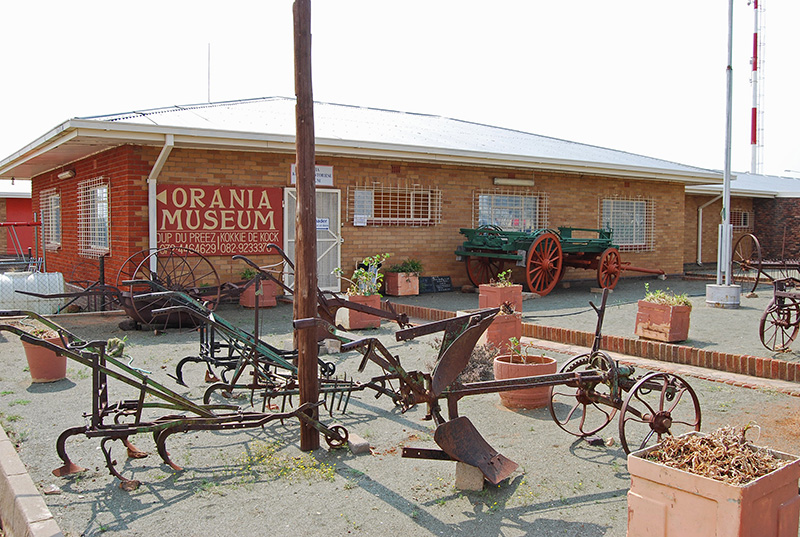 Agricultural Exhibit at the Orania Museum

The Orania Cultural History Museum includes inter alia an outdoor exhibition of agricultural equipment, the Felix Lategan gun collection and a Vierkleur Flag (flag of the former Zuid-Afrikaanse Republiek or Transvaal Republic), that was carried by Jopie Fourie who was a scout and despatch rider during the 2nd Anglo Boer War and who was executed by firing squad during the Rebellion of 1914 - 1915 against General Louis Botha, the then Prime Minister of the Union of South Africa. 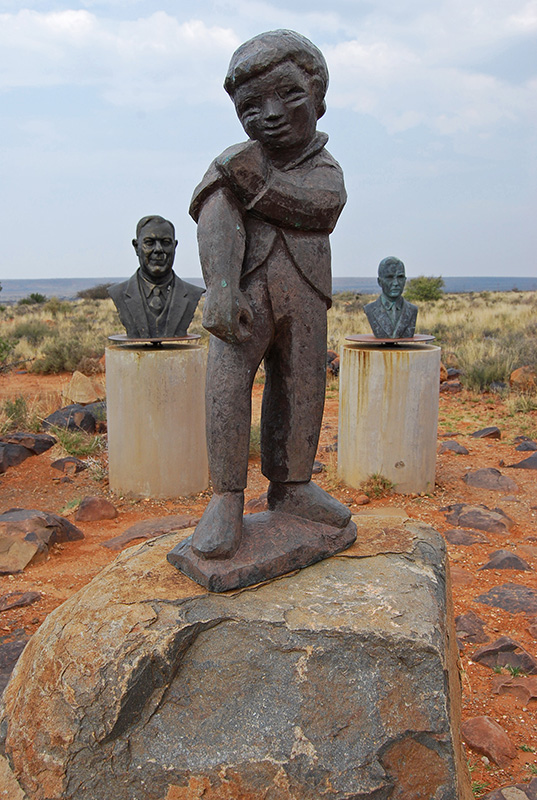 The Small Giant the symbol of Orania 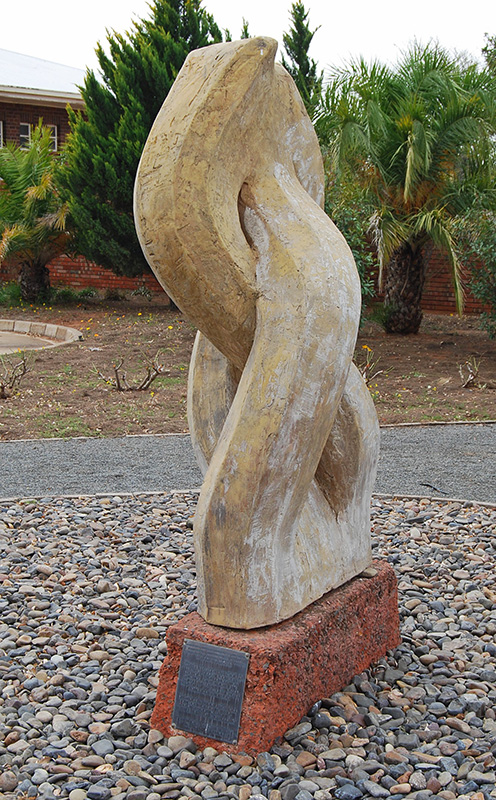 A collection of busts of Afrikaner leaders, sourced from institutions that no longer wanted them after the 1994 transition, are located on Monument Hill overlooking the town. This display of busts is shared by a statue of the Klein Reus, or Small Giant, a small boy shown rolling up his sleeves and used as the symbol for the town’s flag, on the Ora - the town’s local currency and other merchandise. 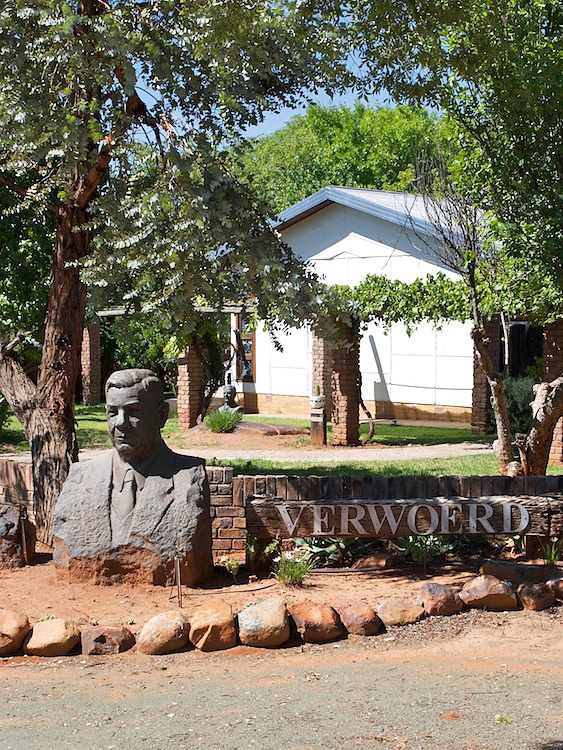 Orania also features a Hendrik Verwoerd museum, where personal items and photos of this former South African Prime Minister are on display. It was the house where his widow, Betsie Verwoerd, lived from 1992 until her death at the age of 98 years in 2000.

The Koeksister Monument, erected in 2003, celebrates the women who baked and sold koeksisters, a syrupy sweet Afrikaner delicacy, to collect money for charity and is one of the town's tourist attractions.

Orania also houses the Irish Volunteer Monument located on Monument Hill, dedicated to the Irish soldiers who fought for the Boers during the 2nd Anglo Boer War.

The monument was moved from Brixton in Johannesburg to Orania in 2002 by a group of Afrikaners concerned for its continued existence. 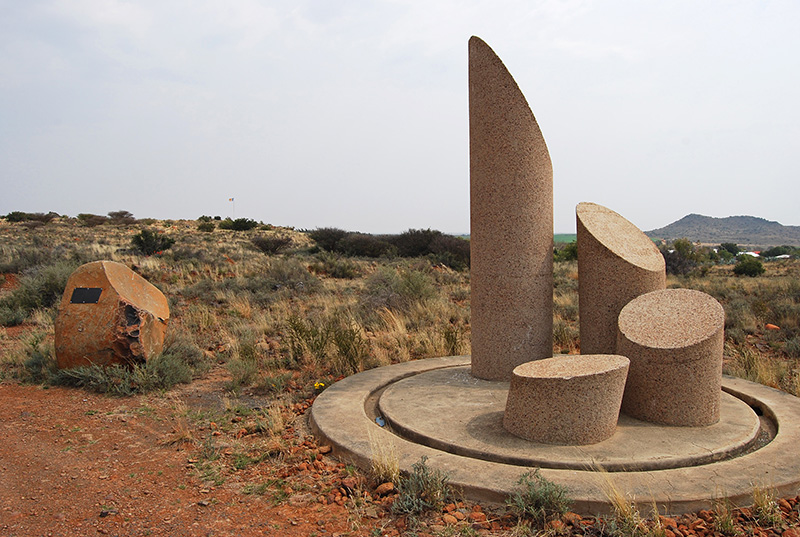