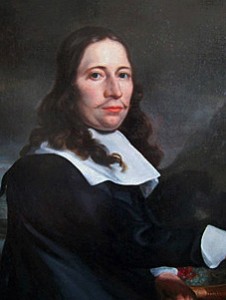 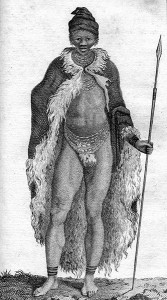 Klaas, the faithful retainer
of the explorer Le Vaillant,
was typical of the Khoikhoi
of the late eigtheenth century

The early known history of Aberdeen dates back to the late seventeenth century when Ensign Shriver was sent by Governor Simon van der Stel to barter trade goods for the sheep and cattle of the Inqua Khoisan under the leadership of Heykon. The first meeting between the Inqua and Ensign Shriver took place some 30-kilometres north west of Aberdeen in the lee of the Onder Sneeuberge in January 1689.

These initial contacts between the indigenous people of the region and the European settlers at Cape Town were a pre-cursor to the movement of the Trekboers or nomadic farmers who moved away from the restrictions imposed on them by the rule of the Dutch East India Company in Cape Town.

In 1777 Captain Robert Jacob Gordon an employee of the Dutch East India Company travelled along the Kraai River in the vicinity of Aberdeen and with the assistance of a draughtsman drew a panoramic view of the Camdeboo Mountains from the crest of a small koppie or hillock some seven kilometres from Aberdeen towards Graaff-Reinet. This koppie later became known as Gordon’s koppie and is situated close to the N9 highway towards Graaff-Reinet. 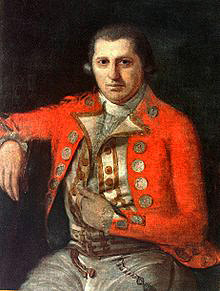 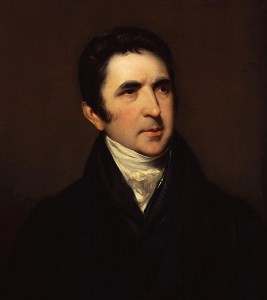 The English botanist William Paterson accompanied Gordon on his travels. By the late eighteenth century many Trekboers had moved into the Camdeboo and this movement coincided with the establishment of Graaff-Reinet in 1786. Other important explorers and travellers in the area included the French naturalist Francois le Vaillant in 1783 and John Barrow who was entrusted with the task of reconciling the Dutch settlers and the indigenous population in the interior of the Cape Colony after its seizure by the British from the Dutch in 1795.

The original title deeds for the land on which Aberdeen is situated were signed by the British Governor Lord Charles Somerset in 1817. Aberdeen was established on the farm Brakkefontein which was sold by its owner Jan Vorster to the Dutch Reformed Church in 1855. 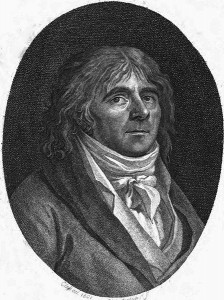 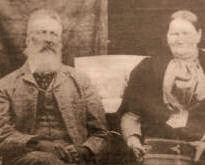 Jan Vorster photographed with his wife

The new settlement was named Aberdeen in honour of the birthplace of the Reverend Andrew Murray (senior). Many of the title deeds for property in Aberdeen date back to 1857 when the Dutch Reformed Church Council began to sell land to early residents in the precinct surrounding the church.

The 2nd Anglo Boer War caused tremendous dissension between Dutch and English residents of Aberdeen in line with many of the smaller towns scattered across the hinterland of the Cape Colony. 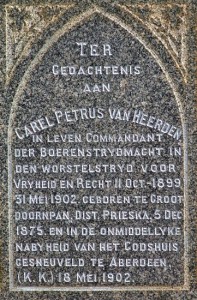 Gravestone of Commandant
Carel van Heerden in the
Aberdeen Cemetery

During the war 139 residents of Aberdeen rebelled against the Colonial Administration and joined up with the Boers fighting on behalf of the Orange Free State and the Transvaal. By so doing they were technically traitors as all residents of the Cape Colony irrespective of whether they spoke Dutch or English were British citizens. 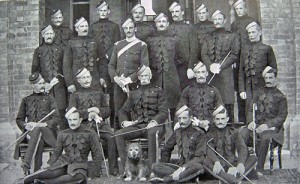 The Aberdeen Cemetery provides a window on this particularly unsettled period in the history of the town. Commandant Carel van Heerden was killed in a hail of bullets on 12 May 1902 during a shoot-out outside the Dutch Reformed Church whilst trying to steal horses belonging to the British. His men managed to get away with 54 horses. John Baxter was shot for wearing British khaki, as many of the Commandos were forced to wear clothing captured from the British. Baxter had asked directions to his camp from a local shepherd. Thinking he was British because of his apparel the shepherd directed him to the British encampment where he was captured by the 17th Lancers. 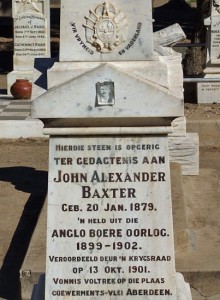 Gravestone of John Baxter
in the Aberdeen Cemetery 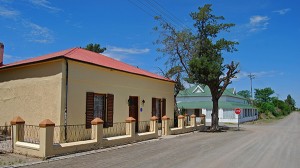 The cemetery also contains a memorial commemorating the death of the 25 British Officers, Non –Commissioned Officers and Men who fell in the district in the 2nd Anglo Boer War between 1899 and 1902. 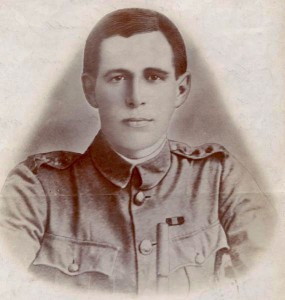 One of the famous historical figures that saw action in the Aberdeen district during the 2nd Anglo Boer War was Lawrence Edward Grace Oates. Serving in the 6th Inniskilling Dragoons he suffered a gunshot wound to his left thigh in March 1901 which shattered his leg and left it an inch shorter than his right leg when it eventually healed.

In that skirmish he was twice called upon to surrender, and replied "We came to fight, not to surrender." He was recommended for the Victoria Cross for his actions. He was promoted to Lieutenant in 1902 and Captain in 1906. 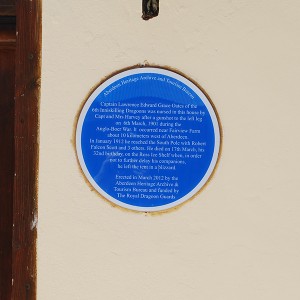 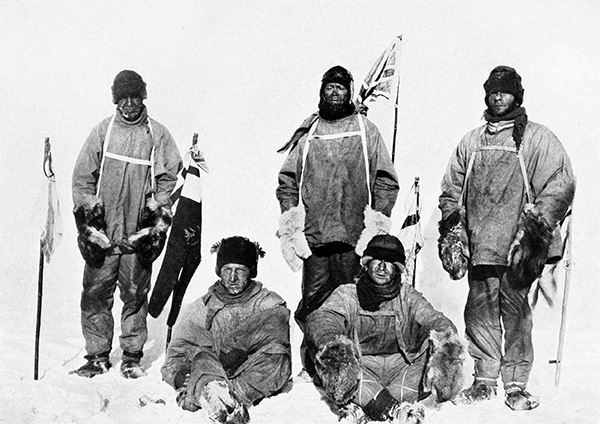 He later served in Ireland, Egypt, and India. He was nursed by the Harvey family of 16 Brand Street in Aberdeen where he celebrated his 21st birthday. The wound caused him a lifelong limp. Oates accompanied Captain Robert Falcon Scott on the British Polar Expedition to the South Pole in 1910. He was in charge of 19 Siberian ponies, the care of which consumed his health. After the horses were destroyed, Oates and the men hauled their own equipment. His old war wound became gangrenous and he was unable to pull his sledge. Bearing unendurable pain he deliberately walked out into a blizzard and the bitter cold and was never seen again. It was on the day of his 32nd birthday that he made the supreme sacrifice. The whole party perished but the following year when a relief party found Scott's diaries, they found that he had written: “Oates slept through the night hoping not to wake, but he awoke in the morning. It was blowing a blizzard. Oates said: ‘I am just going outside, and may be some time.’ He went outside and we have not seen him since. We knew that Oates was walking to his death, but though we tried to dissuade him, we knew it to be the act of a brave man and an English Gentleman.”