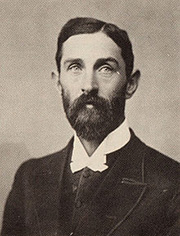 As with so many of the towns and villages of the Great Karoo Merweville has its origins as a new Dutch Reformed Church Parish to serve the spiritual needs of the local farmers. The Beaufort West Parish during the 1800s served a geographic area in excess of 30,000 square kilometres. In order to attend “nagmaal” or communion the local residents and their families would need to travel more than 120-kilometres to Beaufort West.

In 1897, with the support of the Dutch Reformed Church Minister in Beaufort West, Pieter van der Merwe, the local farmers appealed to the church authorities to create a new parish. An offer was made to purchase a portion of the farm Vanderbylskraal from its owner who gloried in the name Johannes Jacobus Le Seur van der Byl. The sale was concluded for the sum of £4,500 and from this transaction the village of Merweville was born and named in honour of Minister van der Merwe from distant Beaufort West.

The outbreak of the Anglo Boer War in 1899 interrupted the establishment and development of the village and it was only in 1905 that the land was transferred to the church and the village was formally established.

Van der Byl was an enterprising and entrepreneurial frontiersman and his well-managed farm was the pride of the district. The farm was located in a well-watered area fed by the river and several permanent fountains. The abundant water allowed him to develop an efficient irrigation system that ensured his vegetable gardens, orchards and pomegranate hedges flourished. As Vanderbylskraal thrived so the community attached to the farm grew. This meant that within a few years the nucleus of a village had developed around the Van der Byl homestead.

In addition to houses and cottages surrounding the main house, there were store rooms, stables, sheds, a shop and post office. The farm often hosted post coach passengers. There was also a small police station and a jail. As the locally appointed magistrate, Van der Byl heard cases on petty offences and infringements of the law. He imposed fines, punishments and short-term sentences which were served in the farm jail.

Van der Byl insisted that his children were educated. When the eldest of his brood of nine was old enough for school he employed a Mr Coller to teach the child and others of similar age. This school flourished until the outbreak of the Anglo-Boer War with attendance then dropping due to the restrictions of martial law and the dangers of travel during the war.

During the Anglo-Boer War Van der Byl suffered the indignity of becoming a prisoner in his own farm jail. On a scouting mission one day a raiding Boer Commando under the command of Commandant Wynand Malan locked van der Byl in the little farm jail and rode off with the key. As there was no spare key, members of the farming community had to break into the jail to free the magistrate. The event remained forever a sore point with Van der Byl. 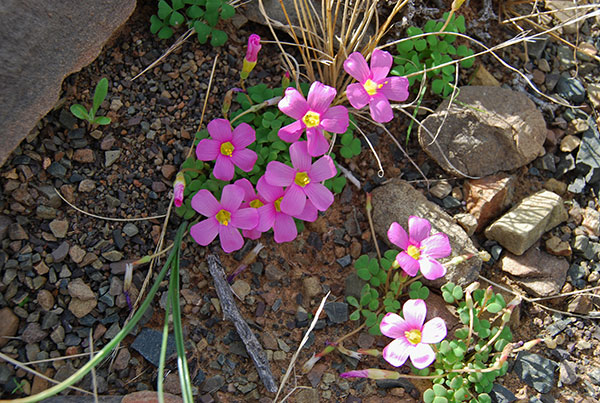 Wild flowers bloom near the grave of Lieutenant Walter Arnot

On the outskirts of the village a signpost points the way to "The Englishman’s Grave" and a marble cross above a well-tended grave marks the final resting place of Lieutenant Walter Arnot from Australia who served with the British forces during the Anglo Boer War. 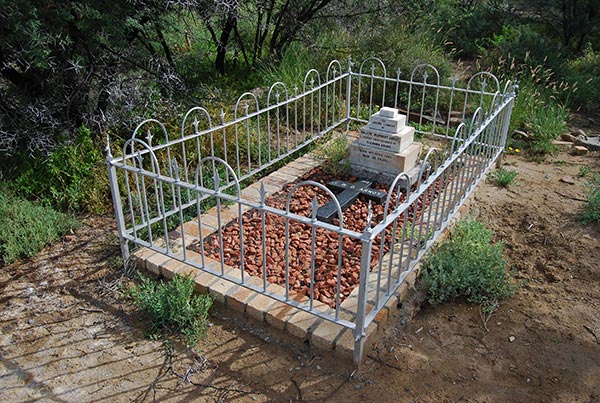 Walter Arnot, was the son of Dr Henry Arnot, MD RN. He was born in Essex in England on 9 September 1860 and was educated at the Royal Naval School in New Cross, London. At the age of nineteen he moved to Australia to take up sheep farming and by the age of 20 was managing a large sheep station.

During the next eight years he held similar positions on other major sheep stations and was complemented on his stock management practices during a long drought. In 1888 he joined A Battery Field Artillery in Adelaide and was married in the same year. When the Anglo Boer war broke out in 1899 he joined the 3rd South Australian Contingent - the South Australia Bushmen Corps, as a sergeant. The Corps specialised in scouting and intelligence gathering. He arrived in Africa at the port of Beira in Portuguese East Africa and was promoted to lieutenant. 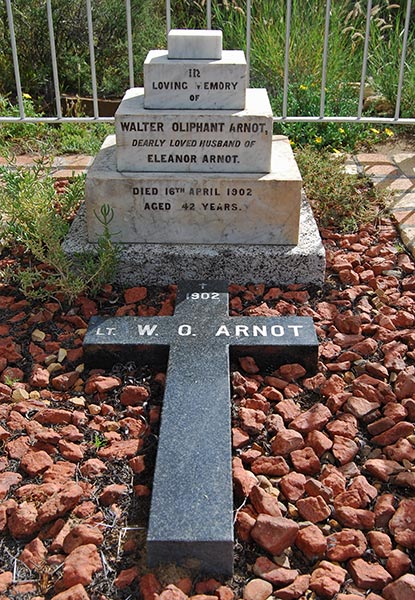 In April 1902 Lietenant Arnot found himself in the Laingsburg district and was engaged in a scouting patrol. He was accompanied by Private John Sparkes, of the 16th Lancers, who was stationed at Laingsburg and in charge of the Intelligence Department's horse unit and Abraham January, a scout and resident of Laingsburg. The patrol spent the first night at Blaaubank farm and rode on to Dwars River farm, near Sutherland, to interview Jacobus Adriaan Victor, "the only person in the district who spoke English".

At the inquest Victor said Arnot had been in "good spirits and quite jolly". But soon after that his mood seemed to change. He sank into a deep depression as the patrol rode via Modderfontein, Desyver and Van Wyksberg farms to Prince Albert Road. By the 15th of April, as Jacob stated at the inquest, "Arnot was not in his usual mood. He was very quiet and withdrawn. He had been particularly disturbed the previous night."

Just outside the tiny village of Merweville he took his rifle and a cartridge and walked towards a small hill. His companions thought he was going to shoot a bird as he had done before. Suddenly Abraham January shouted: "He's going to shoot himself!" Before they could reach him, he pulled the trigger.The inquest found he had died from a self-inflicted gunshot wound "while in a state of temporary derangement." 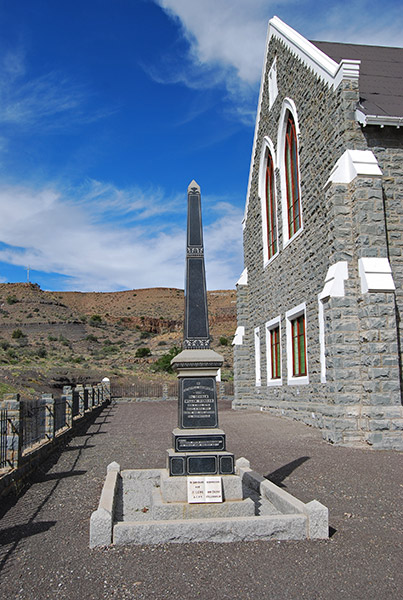 The memorial to the first minister of the NG Kerk in Merweville,
the Reverend Schalk Willem Pienaar

Arnot was buried where he fell. His wife, Eleanor Seabrook, arranged for the erection of a memorial stone and the people of Merweville undertook to "tend his grave forever." This is a promise that has been honoured for more than 110-years since this tragic incident occurred.

In April 1903 a thunderous roar and a deafening explosion rocked the farms Jakkelsfontein and Tamboersfontein that could be heard as far away as Prince Albert Road and Merweville. Local farmers rushed to the scene of the explosion and discovered a meteorite that had plunged to the earth on the boundary of the two farms. The Jakkelsfontein meteorite was donated to the South African Museum in 1907.

During the war a number of small low grade coal mines provided fuel for the local residents and the presence of coal caught the attention of Bernard Israel Nowitz, a Jewish businessman from Cape Town. His application to prospect and mine coal in the Merweville district was rejected, however, he fell in love with a local girl. The girl’s father was not keen for her to marry a Jew and Nowitz then declared himself a Christian Jew and became a leading member of the community and the church In Merweville.

He was instrumental in persuading a number of other young Jews to settle in the district and, in common with many other Karoo towns and villages, the village boasted a sizable Jewish community including the Magid, Godliep, Katz, Samuel, Solomon and Lazarus families. 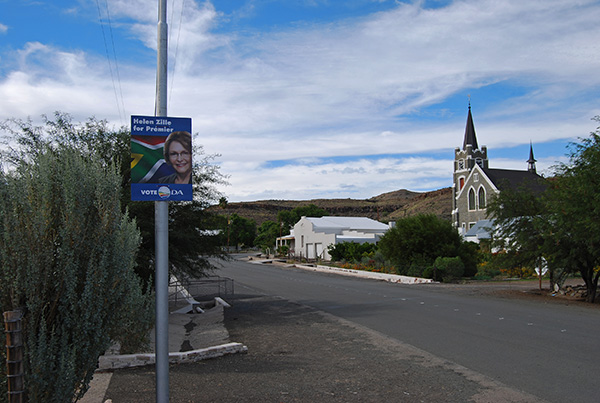 In 1918 the great Spanish Flu epidemic resulted in a number of local deaths including the first Dutch Reformed Church Minister of Merweville, Reverend Pienaar.

More than 140,000 South Africans perished within a period of six weeks, without doubt the most devastating epidemic to inflict South Africa in recorded history.

Periodically during the last century the Karoo has been the centre of wild speculation in terms of its supposed hidden wealth.

Merweville was no exception and during World War II and, as late as 1966, geologists and engineers were engaged in sinking boreholes and drilling for oil in the district. Not a drop was discovered.

In 1978 the speculators returned, this time it was rumoured that there were rich deposits of uranium beneath the dry crust of the Karoo. Again nothing was found and Merweville settled back into its tranquil existence.