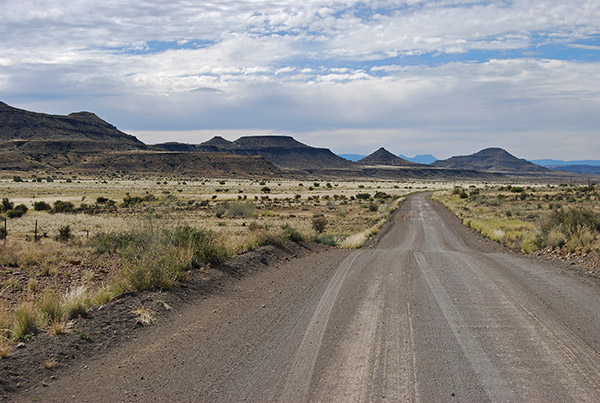 A little known yet magnificent circular drive linking Merweville, Sutherland and Laingsburg encompasses the Rooiberg and Komsberg Passes. This route will involve a full day’s travel but will reward with magnificent scenery. From Merweville, a gravel road leads south-west towards the foothills of the Komsberg terminating on the N1 highway at Koup Station. From here it is a short run into Laingsburg along the N1 highway.

Crossing the Buffels River in Laingsburg, turn north into the Moordenaars Karoo or Murderer’s Karoo, so named for the bloody conflict between the early settlers and the San or Bushmen who inhabited the area. 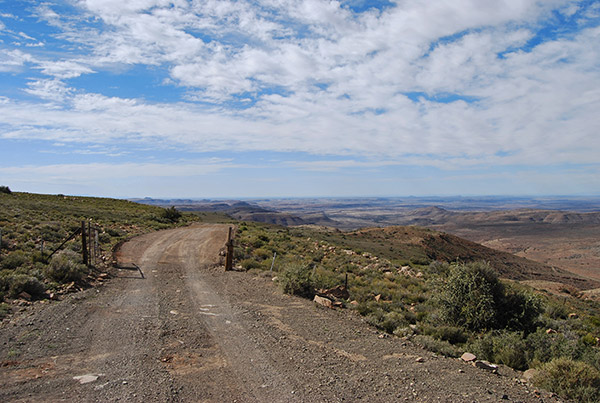 The road from Laingsburg via the Komsberg Pass leads up onto the Roggeveld Escarpment which meets the R354 just above the Verlatekloof Pass or Forsaken Gorge, linking Sutherland and Matjiesfontein, approximately ten kilometres south of Sutherland. The return route to Merweville commences about nine kilometres south of Sutherland on the R354 turning east onto a gravel road towards Merweville.

Before reaching the edge of the escarpment an extinct volcano, Salpeterkop at 1,766-metres, looms to the north of the road which was believed to be active more than 60-million years ago. 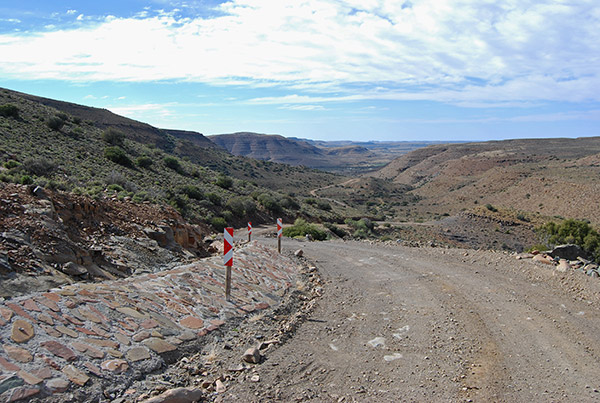 The road continues across the flat and almost featureless Roggeveld Plateau before a superb vista of mountains and long views across the Koup district of the Great Karoo to the distant Swartberg or Black Mountains is revealed.

Descend the little-known Rooiberg Pass which boasts magnificent views along the rim of the Besemgoedberg and out onto the undulating plains of the Koup before returning to Merweville.

Be prepared for fairly rough road conditions, particularly on the mountain passes, together with the opening and closing of numerous farm gates.

You will however be rewarded with some of the most spectacular mountain scenery and the very special tranquillity of the Karoo. 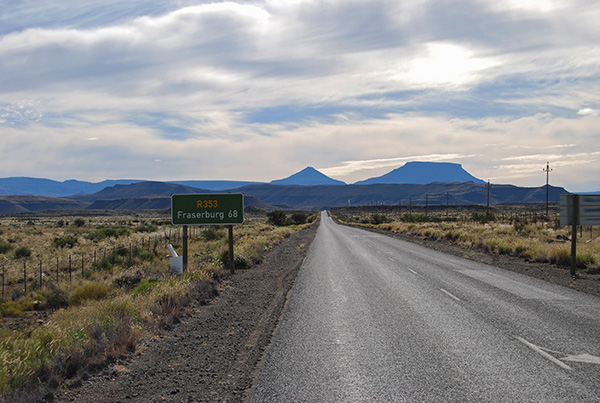 Another interesting day drive from Merweville involves a circular route to Fraserburg and encompasses two interesting mountain passes leading over the Nuweveldberge. From Merweville the road to Beaufort West and Fraserburg leads out of the village towards the north-east. 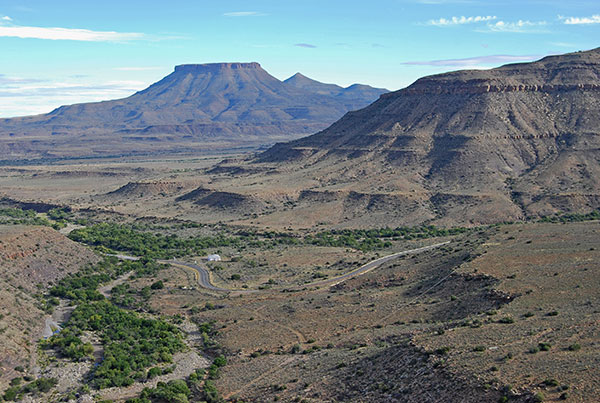 The road leads onto the high central Plateau and into the village of Fraserburg, an ideal spot for a relaxing lunch. From Fraserburg return to Merweville along the tarred R353 towards Leeu Gamka, descending the Nuweveldberge via the TeeKloof Pass. 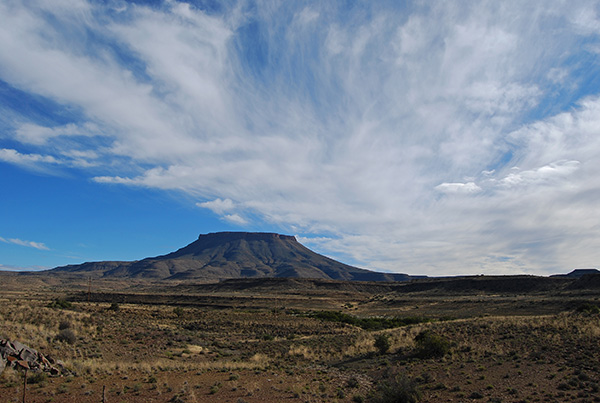 This road provides spectacular views to the west of the Koup’s very own Tafelberg or Table Mountain standing 1,913-metres above sea level. The gravel road junction off the R353 leads back to Merweville.

Prince Albert, in the shadow of the Swartberg Mountains is a short 89-kilometre drive from Merweville. The road to Prince Albert traverses the undulating hills and valleys of the Koup via Prince Albert Road.

The Banksgate trails, in the heart of the Nuweveld Mountains, offers 4 x 4 enthusiasts a choice of at least six trails. The trails vary in length from 10 to 66-kilometres. To add to the excitement and challenge of driving the trails there are a variety of inclines, deep dongas or ravines and loose rock. 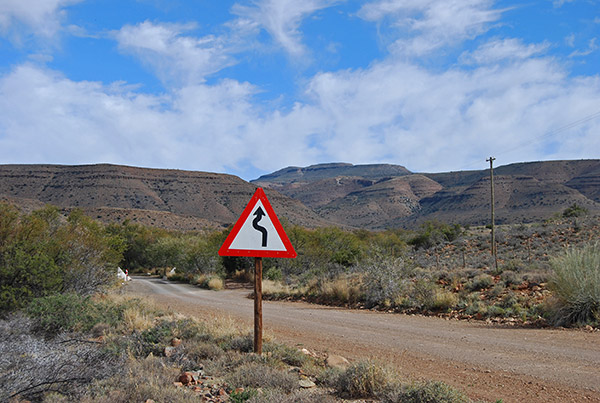 The route from Kromkolk across the Uranium Ridge Pass is breath-taking. For the nature lover there is a canyon filled with sterbome or Star trees, Cliffortia arborea – endemic to the Nuweveld Mountains of the Karoo and the immensely scenic Sterboom Pass. Panoramic views from the peaks of the Nuweveldberge are unsurpassed. The other routes cover the Dwyka Canyon and the vast plains of the Great Karoo.

At Banksgate there are also virgin forest areas in mountainous ravines that are only accessible by foot. There are also have some unusual geological formations, including granite pillars, which are well worth seeing. 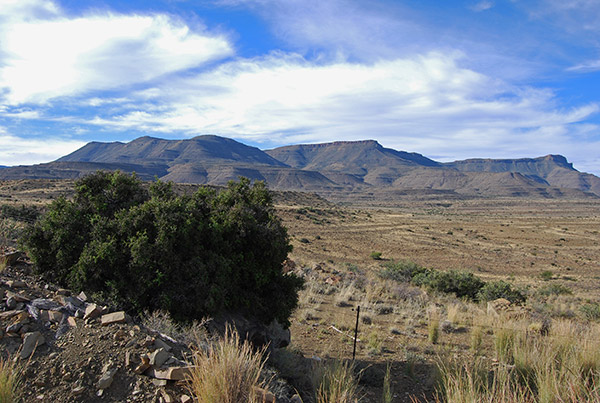 The farm, Nova Vita, offers challenging 4 x 4 routes, hikes and mountain bike trails for those who wish to get closer to nature. The Rhebuck Trails take hikers to the plateau with breath-taking panoramic views over the plains of the Great Karoo and into the world of the black eagle.

Along these trails, hikers can over-night in an old farm house, a primitive hut or simply sleep under the stars. The farm also has several secluded camping places along the river banks for nature lovers. Visitors can explore for fossils and discover Bushmen art. There is an old store and threshing floor at Kneg se Kloof, one of the huts on the hiking route.

There are also freshwater fountains, where wildlife and birds drink. There are fourteen different 4 x 4 routes, each with its own unique difficulty factor. These range from 5 to 40-kilometres in length.