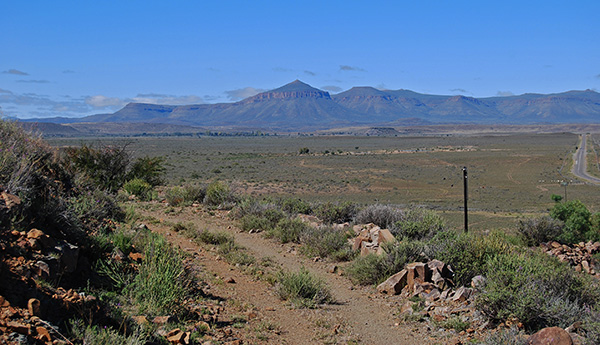 Road from Murraysburg towards Graaff-Reinet

For a taste of the essence of the Great Karoo the 240-kilometre circular route from Murraysburg though Graaff-Reinet and Aberdeen is a must. The route leads east along the R63 from Murraysburg to Graaff-Reinet. The road traverses the high escarpment winding through hills and valleys with distant views to the south to the 1909-metre high mountain known as “Die Duiwel” or the Devil and further along to the more distant 2278 metre high Toorberg or Bewitched Mountain. The road reaches a high point at Voetpadhoogte before gradually descending between high mountain ridges to the edge of the escarpment as one approaches Graaff-Reinet. 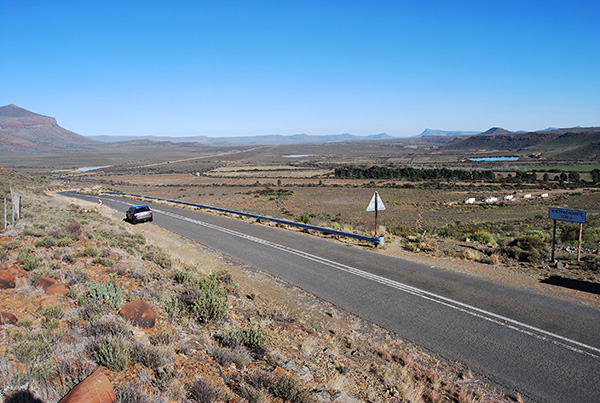 The descent of the Oudeberg Mountain Pass just beyond the gravel road junction towards Nieu Bethesda reveals long sweeping views across the distant Nqweba Dam and the surrounding mountains encompassing the Camdeboo National Park. 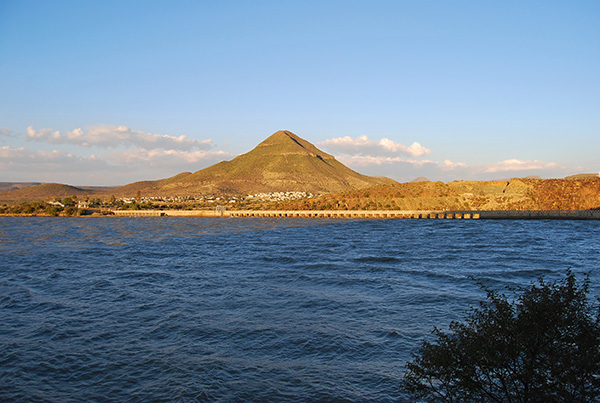 The road skirts the edge of the Nqweba Dam before rounding the mountainside and descends into Graaff-Reinet, crossing the Sundays River below the dam wall.

Enjoy a leisurely stroll around the historical heart of Graaff-Reinet taking the time to visit the many monuments and art galleries, followed by a tasty early lunch at one of the many restaurants in the town before continuing along the N9 highway to Aberdeen.

The road skirts the southern slope of Spandau Kop and the imposing bulk of the 1673-metre high Camdeboo Mountain before entering the atmospheric village of Aberdeen. 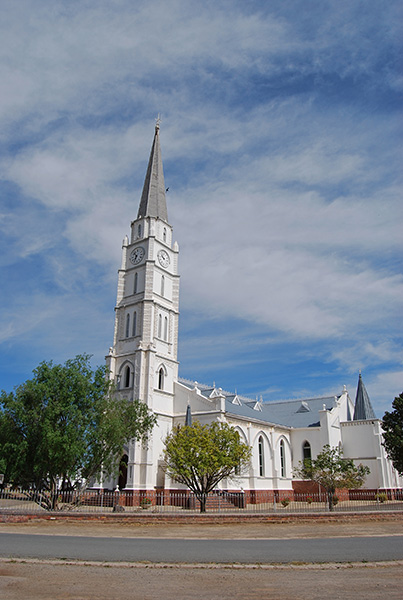 From Aberdeen the route leads out along the R61 towards Beaufort West across an enormous open plain known locally as “Die Vlaktes” or The Flats. About eighteen kilometres out of Aberdeen along the R61 turn north onto the gravel road towards Murraysburg. The road skirts the western slopes of the Camdeboo Mountains and the great hulk of the 1777-metre Sleeping Giant and beyond into the valley overshadowed by the Onder Sneeuberge, or Lower Snow Mountains, which rise to an elevation of 1924-metres.

As one travels to the north the 1146-metre Vaalberg and the 1682-metre Wolwekop, or Wolf’s Head, dominate the landscape towards the west. The road joins with the gravel road leading from Nelspoort before skirting the southern slopes of the 1771-metre Middelkop before leading into Murraysburg. 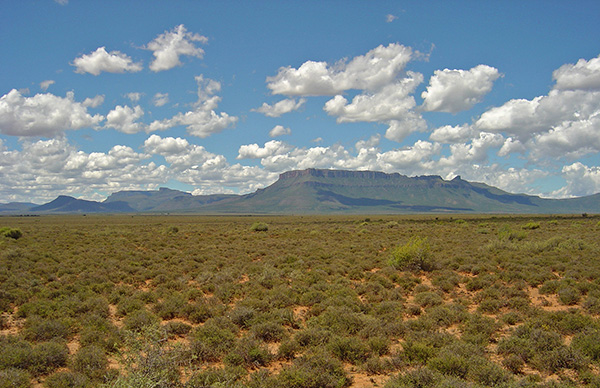 Sleeping Giant between Aberdeen and Murraysburg

This route exemplifies the quintessential Karoo with a landscape of wide open spaces, rugged mountains, the vista of flat topped Karoo koppies and the silence and solitude of this extraordinary place. Take the time to stop along the road and listen to the silence and take in the beauty of the Great Karoo landscape stretching out in all directions. 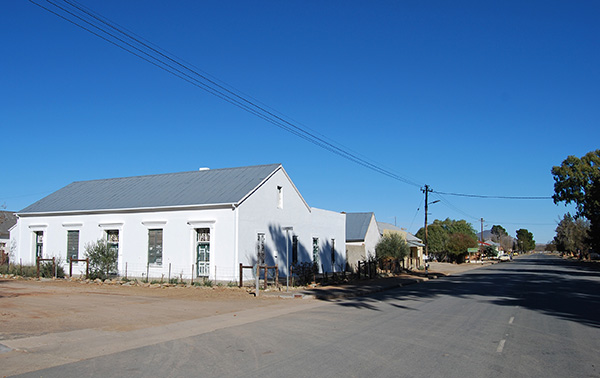 Road from Murraysburg towards Victoria West

From Murraysburg the R63 leads in a north-westerly direction passing the gravel road turning to Aberdeen and Nelspoort. From this point the R63 skirts the 1771-metre high Middelkop to the south before striking out across the wide open plains of the Upper Karoo, reaching the intersection with the N1 highway linking Richmond and Beaufort West.

The R63 continues across the N1 highway finding a gap through a low ridge of hills before reaching the Railway Station at Hutchinson. From here it is a short distance to Victoria West, straddling the N12 highway linking Beaufort West and Kimberley. 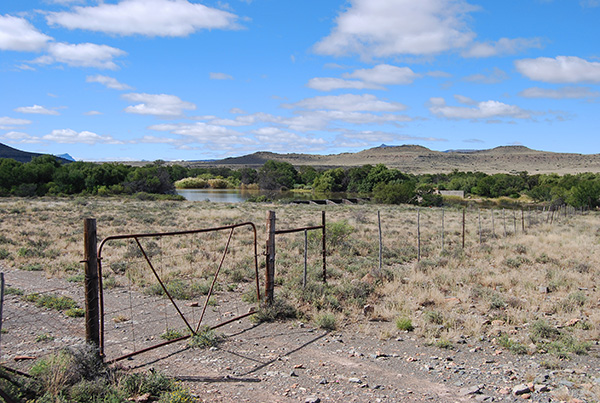 The gravel road linking Murrayburg and Nelspoort is a fantastic alternative to the longer tarred route along the R63 and N1 highway to Beaufort West. The gravel road finds its way through the valley fringing the southern slopes of Middelkop, passing the gravel road turn to Aberdeen.

From Nelspoort the road joins the N1 highway onwards to Beaufort West a further 51-kilometres distant. 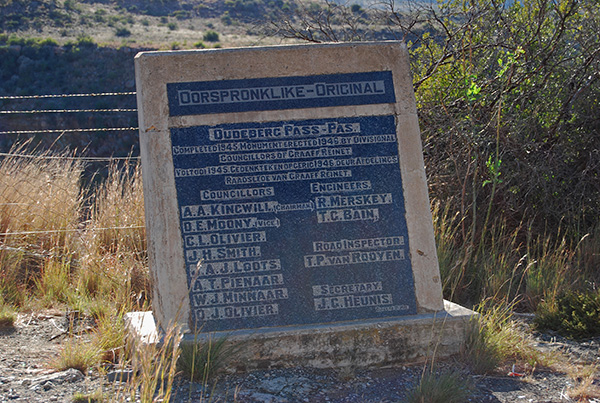 Another great circular route links Graaff-Reinet and the isolated village of Nieu-Bethesda. From Murraysburg take the R63 route to Graaff-Reinet, turning onto the gravel road just before descending the Oudeberg Pass, towards Nieu Bethesda, some 69-kilometres from Murraysburg. 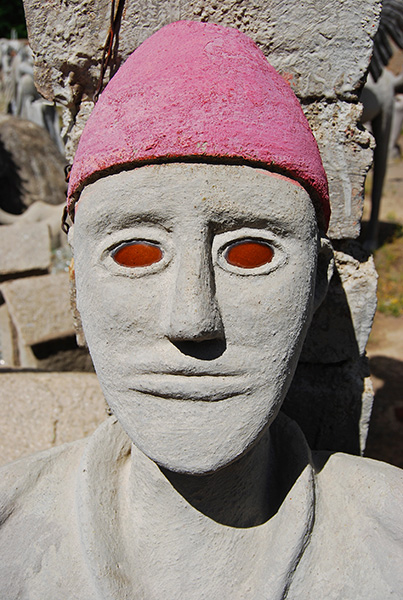 The gravel road traverses a beautiful landscape with sweeping views across mountains and valleys.

A junction is reached, both of which lead into Nieu Bethesda. The longer left hand branch leads through a long valley bounded to the east by the Rooiberg, or Red Mountain. Beyond the Rooiberg the road reaches another junction leading north out onto the high escarpment towards Richmond. 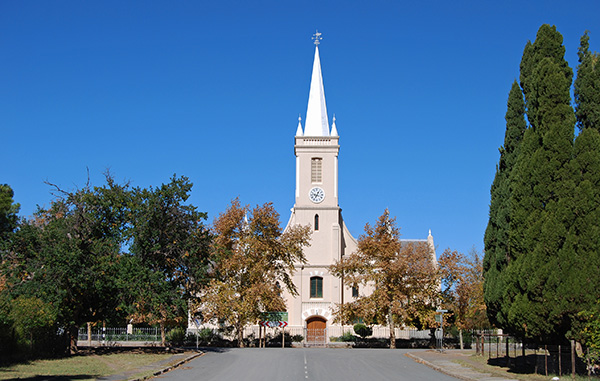 The road towards Nieu Bethesda continues through a wide valley dominated by the bulk of the 2502-metre high Kompasberg, or Compass Mountain, the highest peak in the Cape Midlands.

The road enters a narrow valley descending into Nieu Bethesda where you can enjoy a leisurely lunch, or an excellent cappuccino at one of the many restaurants and coffee shops.

The onward trip to Graaff-Reinet passes through a narrow defile known as Rubidge Kloof in the Voor Sneeuberge, or Front Snow Mountains, leading out into a broad valley where the road joins the N9 highway which leads into Graaff-Reinet. From Graaff-Reinet return to Murraysburg via the R63 and the Oudeberg Mointain Pass.